Snow is likely on Cape Cod and the Islands, possibly expanding west to Narragansett Bay and north to Boston

Storm clouds are gathering today, it’s going to be a close call with a major storm at sea tonight.

We have a fascinating weather map this morning with one low pressure system over western Pennsylvania headed toward the ocean. And another one over the ocean east of South Carolina. The two are going to merge and strengthen to a storm with the power of a hurricane well south of New England.

On the open waters 100 miles east of Nantucket, there is a hurricane force wind warning in effect tonight. Fortunately for most of us this storm is a miss.

We have a bit of light snow near the Canadian border this morning with one boundary, otherwise high-pressure is still in control with sunshine fading behind clouds.

Snow showers will expand in western Maine and actually back westward into New Hampshire early this afternoon.

High temperatures today are in the 30s north and 40s south as wind freshens from the east. We don’t expect any problems before the sun goes down.

Rain will be developing over Long Island, but changing to snow as the sun goes down. Tonight we may have to call the play-by-play on what happens in eastern Massachusetts and Rhode Island. Snow is likely on Cape Cod and the Islands, possibly expanding west to Narragansett Bay and north to Boston. Depending on the path of the track we get a little bit of snow in Southeastern New England, or perhaps enough to send out the snow plows on parts of Southeastern Massachusetts. 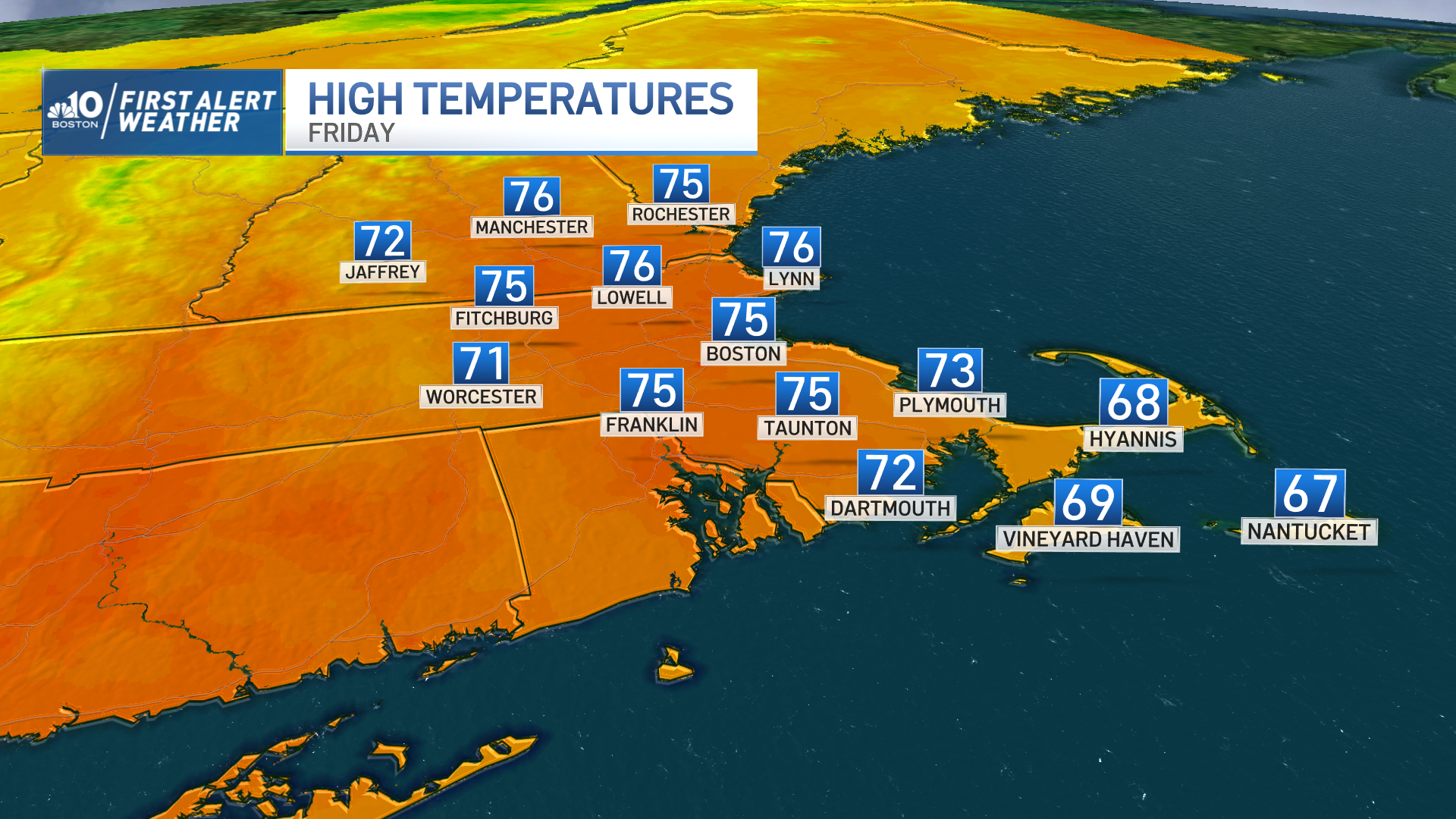 Snow may become heavy at times in Southeastern New England for a while overnight, centered around midnight, with the precipitation shield moving out before the sun comes up tomorrow morning. We have a high wind warning in effect for Cape Cod and the Islands where wind from the north east may gust past 50 mph.

Coastal erosion is likely, and some minor coastal flooding is possible at tomorrow morning’s high tide.

As we watch that storm move away, high-pressure from Canada brings in a chilly air mass with partly to mostly sunny skies tomorrow.

High temperature in the 30s to low 40s, with wind from the northwest 15 to 25 mph diminishing in the afternoon.

We'll be clear and cold tomorrow night, with a brilliant nearly full 'worm moon'. Low temperature in the single numbers and teens north, to teens and 20s south.

As high pressure moves to the middle Atlantic states Sunday, the backside warmth advances in to New England. By afternoon we should be in the 30s to low 40s north, and 40s and 50s south.

Monday looks good for most of New England with more sun and clouds, temperatures in the 60s to near 70° in southern New England.

But there is a serious front in the state of Maine, and northern Maine may actually be snowing much of the day.

That boundary then sets the stage for a most challenging weather forecast in New England next week. It’ll be cold enough for snow north, and possibly cold enough for rain or snow south much of the week with one after another disturbances riding through. Be sure and stay tuned to the latest here and our First Alert 10-Day Forecast.