After a bright start to the day, instability clouds have made a comeback and we are tracking a blend of clouds and sun with increasing wind, peak gusts up to 50 mph possible.

Downed trees and powerlines could lead to isolated power outages once again. Highs will be in the 30s to mid-40s, wind chills in the 20s & 30s. Our risk for brush fire danger stays elevated due to the lack of moisture and windy conditions.

An Arctic front will bring a chance for snow showers and a few snow squalls all the way into southern New England, but especially over the mountains where rapid changes in visibility will make it tricky for motorists. Temperatures Sunday night will dip into the single digits north, 10s to around 20 degrees south. 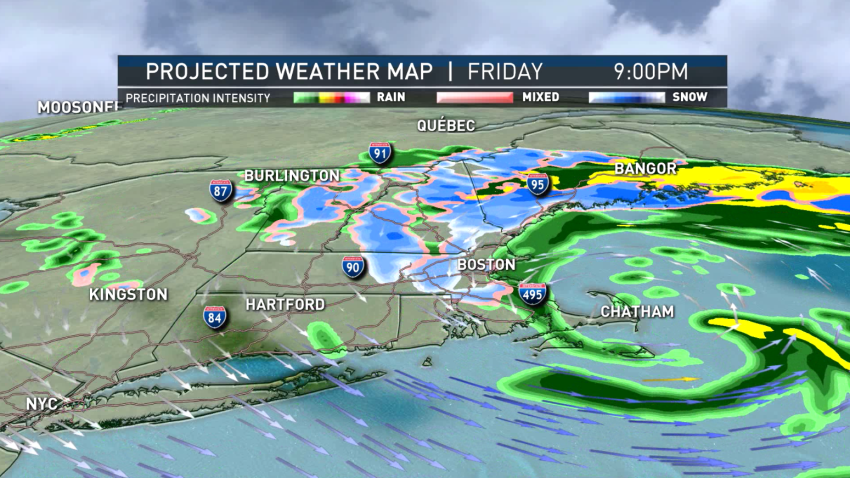 As Snowy Spring Storm Moves Out, Winds to Ramp Up

This frigid Canadian air mass will be responsible for subfreezing wind chills Monday morning as the thermometer dips into the single digits and teens. We will be close to record cold high temperatures, too -- Boston’s record cold high for the day was set in 1932 at 26º while Worcester’s 22º was set in 1993.

Highs will struggle to make it to the melting point, much of the region will be stuck in the 20s under a mostly sunny sky.

By Tuesday, temperatures rise closer to average with highs in the 30s and 40s as we keep a very close eye on the system moving out of the Rockies that could bring a wintry mix for southern New England as the core impacts the Mid-Atlantic region.

Another system heads our way Thursday into Friday with a better chance of getting much needed rain. As of now, the first official weekend of spring looks calm and sunny with seasonable temperatures.