After a chilly Sunday morning, temperatures should rise by the afternoon

Today starts very cold, but we’ll actually make a decent recovery by this afternoon under a mix of sun and clouds. There may an isolated ski country snow shower, but a south wind will boost temperatures into the 30s to near 40.

Temperatures for tailgating in Foxboro will also be in the 30s before dipping close to freezing for kickoff against the Chiefs. Temperatures will then hold steady during much of the game, before climbing overnight Sunday into Monday as our next storm comes in.

That next storm comes in Monday and Tuesday with waves of rain and temperatures in the 50s to near 60. Expect a widespread 1-2 inches of rain, with locally higher amounts. 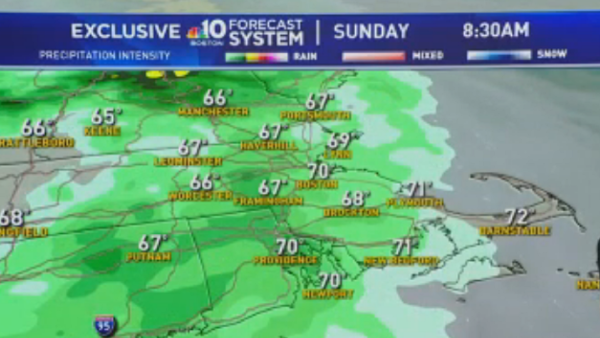 That, combined with lots of snowmelt, will result in some big puddles and flooding early next week.

We’ll also watch the end of the storm, which may end as a burst of snow with colder air arriving early Wednesday.

Our weather is chilly and quiet after that, until another storm potentially arrives next weekend. Right now that too is looking more wet than white.