Storm That Carpeted Midwest With Snow Barrels to New England

The storm could affect 111 million people across the country

A major winter storm that blanketed most of the Midwest with snow earlier in the weekend barreled toward New England Sunday, where it was expected to cause transportation havoc ranging from slick and clogged roads to hundreds of cancelled airline flights.

The National Weather Service issued winter storm warnings or advisories for part or all of at least 15 states stretching from southeast Missouri to the northern tip of Maine. Some northern parts of New England could see up to 18 inches of snow.

The storm was caused by the clash of an Arctic high pressure system with a low pressure system coming through the Ohio Valley, said NWS Baltimore-Washington, D.C. meteorologist Dan Hofmann. 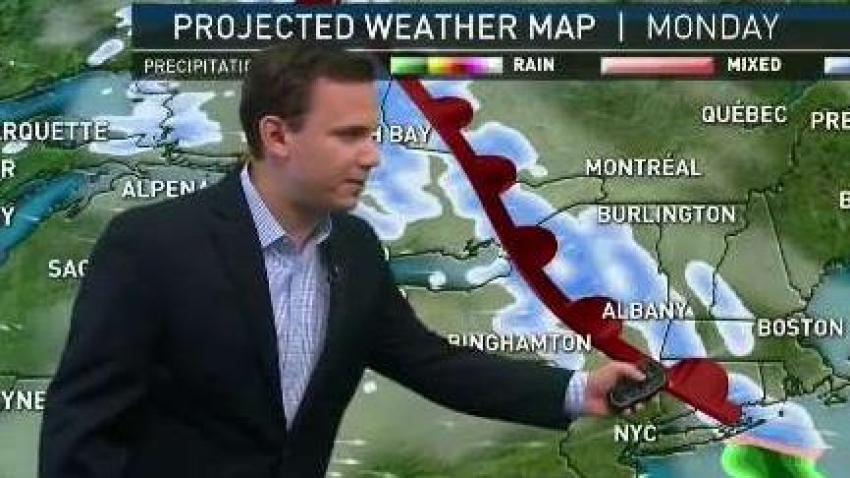 Thaw Continues Ahead of Weekend Storm

"It happens that this one is going through a relatively high population area," Hofmann said.

The snow was part of a wall of hazardous weather that moved from the Dakotas across the Great Lakes states. The storm brought snow, ice and strong winds, followed by deep cold. The highest snowfall totals were expected in Vermont, New Hampshire and Maine.

Earlier, the system dumped up to 10 inches of snow on parts of the Midwest Saturday, with more on the way Sunday from lake-effect snow off the Great Lakes.

A plane carrying 129 people skidded from a slick runway at Chicago's O'Hare International Airport Saturday. No injuries were reported on the United Airlines flight as it arrived from Phoenix, Chicago Fire officials said.

Hundreds of flights were cancelled in and out of Chicago area airports on Saturday and as the storm moved east airlines were cancelling flights to the East Coast. FlightAware said late Saturday that airlines had cancelled 250 flights that were supposed to leave Sunday from Boston's Logan International Airport. Dozens of Sunday flights were also cancelled from New York's John F. Kennedy International, Reagan National in Washington and Newark Liberty International in New Jersey.

Amtrak canceled some trains Saturday from Chicago to Washington and New York and between New York and Boston and Pennsylvania on Sunday.

The National Weather Service in Albany, New York, said snow could fall at a rate of 1 to 3 inches (2.5-7.5 centimeters) an hour, creating "difficult to impossible travel conditions" in areas.

The storm prompted the cancellation of a Special Olympics competition in upstate New York. Nearly 200 athletes from around New York state were expected to compete in snowshoeing, snowboarding, cross country, and Nordic and Alpine skiing at West Mountain, just outside Glens Falls.

New York Gov. Andrew Cuomo announced a tractor-trailer and bus ban on the New York State Thruway (except for I-95 in Westchester and Bronx) and most interstate highways beginning at 3 p.m. Saturday, to last through the duration of the storm.

Snow was expected to arrive in New York City Saturday evening, but turn to rain overnight.

New Jersey Gov. Phil Murphy issued a state of emergency to go into effect noon Saturday. He urged residents to stay in their homes and avoid driving on the roads, and instituted a restriction on commercial travel on many highways.

Pennsylvania Gov. Tom Wolf also declared a statewide emergency starting Saturday that includes speed restrictions, as well as a "ban on all commercial traffic, including buses on most interstates and the Pennsylvania Turnpike."

In Boston, snow was expected to sweep in overnight, falling a rate of an inch per hour at times, before turning to rain.

In Connecticut, a Winter Storm Warning was in effect Saturday night for Litchfield and Northern Fairfield counties, while a Winter Weather Advisory was in effect for the rest of the state. Forecasters warned motorists of slick road conditions expected Monday morning as temperatures sink below 10 degrees.

Earlier in Kansas, a snowplow driver was killed when the plow drove onto the shoulder of a road and rolled over, throwing him under the vehicle. It wasn't clear why the driver had moved to the shoulder from the roadway.

A 15-vehicle crash on slippery roads blocked a section of Interstate 55 in southeastern Missouri near Ste. Genevieve Saturday afternoon and drivers were urged to find an alternative route. In Detroit, many motorists were moving well below posted speed limits along freeways due to slushy conditions.

But some Midwesterners didn't let a little winter weather keep them from going outside.

In downtown Detroit, Celeste Tremmel was out training for a marathon amid heavy and steady snowfall.

"When you run a marathon, you run no matter the weather," said Tremmel, who plans to run a March marathon in South Carolina.

Running in snow is "like running in sand, so you go a lot slower and it's a lot more work," she said. "I'm really tired ... but 40 degrees, wind and hail is worse."

As the storm system moved east, the frigid Arctic air behind it was expected to envelop many parts of the Midwest where it had just snowed.

"The air that it is bringing down with it is very, very cold," Hofmann said.

In Iowa, temperatures in the teens Saturday had dropped to zero or below by late Saturday, producing wind chills as low as 20-below by Sunday morning.

Bitterly cold air is expected in the storm's aftermath.