Solomon was placed on administrative leave last month after a scathing report from Massachusetts officials investigating his salary and those of other high-ranking officers.

Solomon has been on paid leave since last month, when the Massachusetts Inspector General issued a report concluding he had helped draft labor contracts benefiting himself and those close to him.

The report from Inspector General Glenn Cunha, "Leadership Failures in Methuen Police Contracts," found that former Mayor Stephen Zanni and the city council "likely violated state laws" and did not comply with Methuen's rules when Solomon's contract was negotiated.

"As a result of this continued investigation, the OIG found a failure of leadership at all levels," Cunha's report noted.

The report said that, in 2017, Zanni agreed to pay Solomon more than $375,000 the following year, a salary eclipsing those of police commissioners and superintendents in New York, Boston and Chicago by more than $100,000. His salary topped Los Angeles' police commissioner by about $4,000.

More on the Methuen Police Department 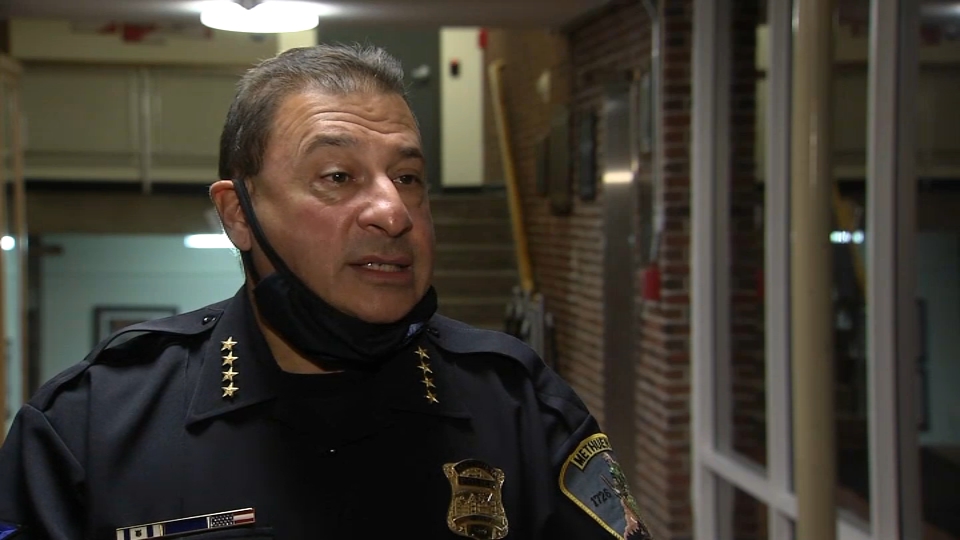 Gallant, the leader of the Methuen Police Superior Officers' Association, allegedly changed the system by which top officers' base pay is calculated. His method, referred to in the report as the "Gallant Formula," led to such officers receiving raises as high as 183%.

"Mayor Zanni agreed to the Superiors' Contract without understanding its financial implications," Cunha wrote, explaining that Gallant added language to the final contract that the city never agreed to.

Perry said Executive Capt. Kristopher McCarthy would serve as the acting police chief, while Lt. Randy Haggar has been named as captain of field operations.

Earlier this month, Solomon defended his salary to NBC10 Boston.

Previously, City Council Chair James McCarty had accused Solomon of acquiring his high salary through political favors, explaining that the city did not have enough resources to sustain it. But Solomon said he believed his agreement with the city should be honored.

"If you negotiate a contract and it's signed by both parties and approved, the contract should be honored until both parties come together and have a reasonable negotiation and either renegotiate or agree to disagree," he said earlier this month.

Those budget issues have been all too evident at Solomon's own workplace. In January of 2019 — a year after his salary increased to $375,000 — he began executing layoffs of dozens of officers.

Weeks later, the city increased the police department's budget by $1.2 million, saving some of those jobs.

Throughout the layoff crisis, critics in the city council pointed to the juxtaposition of top officers' exorbitant salaries and a department that could not afford to pay its full staff.

"We were faced with a ridiculous contract in a community where the average household income of only $62,000," City Councilor Steve Saba said last year. "We're expected to approve and smile and be happy with paying captains upwards of $250,000 each."