The legislation confronts several aspects of policing that have come under strong criticism, especially as more and more police violence is captured on cellphone video and shared widely across the nation and the world

Democrats proposed a far-reaching overhaul of police procedures and accountability Monday, a sweeping legislative response to the mass protests denouncing the deaths of black Americans in the hands of law enforcement.

The political outlook is deeply uncertain for the legislation in a polarized election year. President Donald Trump is staking out a tough "law and order” approach in the face of the outpouring of demonstrations and demands to re-imagine policing in America.

“We cannot settle for anything less than transformative structural change,” said House Speaker Nancy Pelosi, drawing on the nation’s history of slavery. 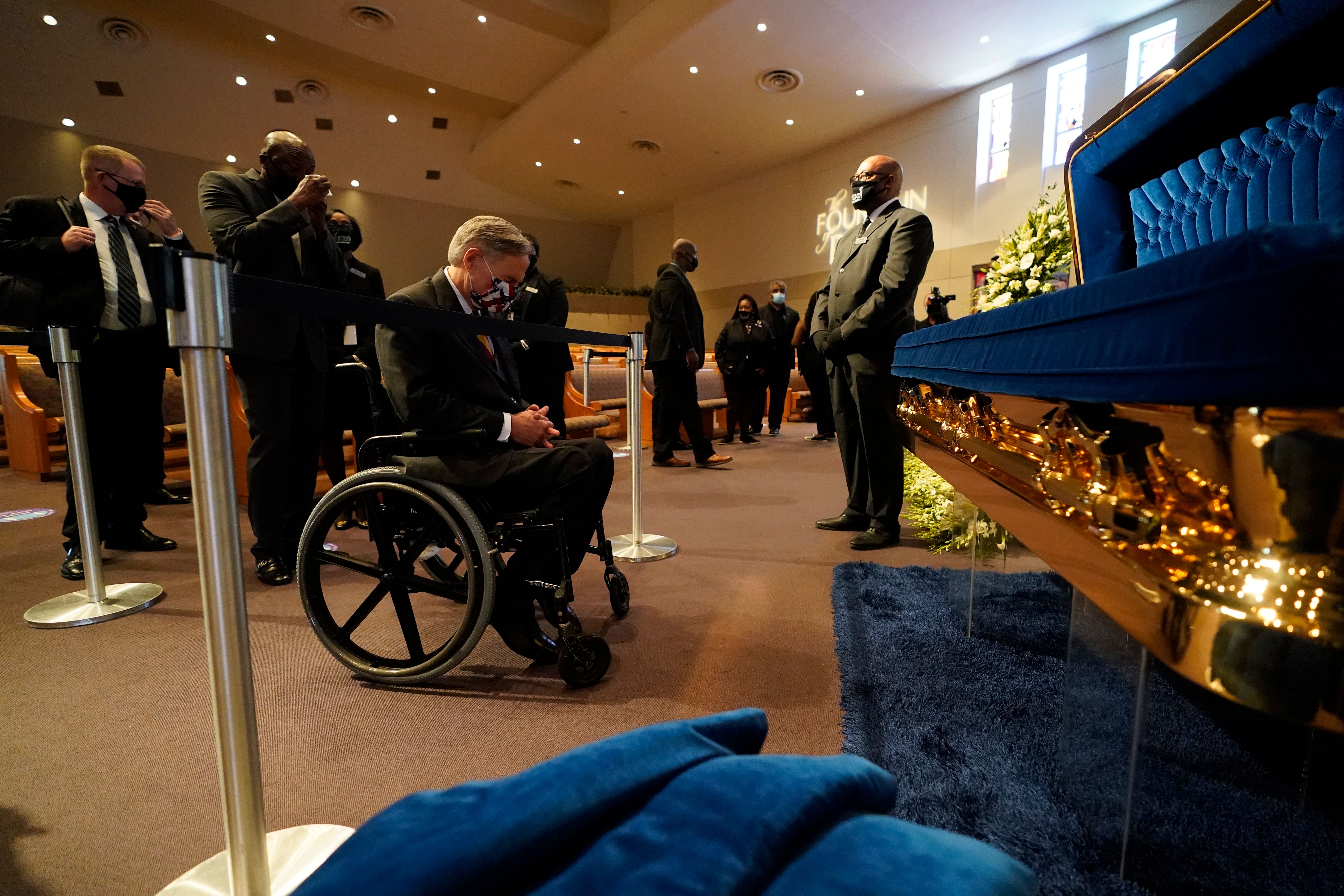 Mourners Gather in Houston to Pay Respects to George Floyd

Before unveiling the package, House and Senate Democrats held a moment of silence at the Capitol's Emancipation Hall, reading the names of George Floyd and many others killed with police interactions. They knelt for 8 minutes and 46 seconds — now a symbol of police brutality and violence — the length of time prosecutors say Floyd was pinned under a white police officer’s knee before he died.

Trump, who met with law enforcement officials at the White House, characterized Democrats as having “gone CRAZY!”

As activists call for restructuring police departments and even to “ defund the police,” the president tweeted, “LAW & ORDER, NOT DEFUND AND ABOLISH THE POLICE.” He declared later, “We won't be dismantling our police.”

Democratic leaders pushed back, saying their proposal would not eliminate police departments — a decision for cities and states — but establish new standards and oversight.

Joe Biden, the presumed Democratic presidential nominee, “does not believe that police should be defunded,” said spokesman Andrew Bates.

The Justice in Policing Act, the most ambitious law enforcement reforms from Congress in years, confronts several aspects of policing that have come under strong criticism, especially as more and more police violence is captured on cellphone video and shared widely across the nation and the world.

The package would limit legal protections for police, create a national database of excessive-force incidents and ban police choke holds, among other changes.

It would revise the federal criminal police misconduct statute to make it easier to prosecute officers who are involved in “reckless” misconduct and it would change “qualified immunity” protections to more broadly enable damage claims against police in lawsuits.

The legislation would ban racial profiling, boost requirements for police body cameras and limit the transfer of military equipment to local jurisdictions.

Young people have been behind some key victories in the protest movement against police brutality, including that some schools are breaking security contracts with local police, said Tiffany Loftin, director of the NAACP Youth and College Division.

Overall, the bill seeks to provide greater transparency of police behavior in several ways. For one, it would grant subpoena power to the Justice Department to conduct “pattern and practice” investigations of potential misconduct and help states conduct independent investigations.

And it would create a “National Police Misconduct Registry,” a database to try to prevent officers from transferring from one department to another with past misconduct undetected, the draft says.

A long-sought federal anti-lynching bill that has stalled in Congress is included in the package.

“The world is witnessing the birth of a new movement in this country,” said Rep. Bass, chairwoman of the Congressional Black Caucus, which is leading the House effort. She called the proposal “bold” and “transformative.”

While Democrats are expected to swiftly approve the legislation this month, it does not go as far as some activists want. The outlook for passage in the Republican-held Senate is slim.

“No industry is safe from the Democrats’ abolish culture,” said Michael McAdams, a spokesman for the House Republican campaign committee, in an email blast. “First they wanted to abolish private health insurance, then it was capitalism and now it’s the police.”

Ben Crump, the attorney for George Floyd's family, spoke at the memorial for Floyd and called for people to stand up to evil.

"This isn’t about that,” Pelosi said. Congress is not calling for any wholesale defunding of law enforcement, leaving decisions to local cities and states, Democrats noted. Some cities are shifting police resources to other community services in response to the protests.

It is unclear if law enforcement and the powerful police unions will back any of the proposed changes or if congressional Republicans will join the effort.

Senate Majority Leader Mitch McConnell, whose Louisville hometown faces unrest after the police shooting of Breonna Taylor in her home, said he would take a look at potential Senate legislation.

Democrats from the House and the Senate took a moment of silence on Monday to remember George Floyd and others killed during interactions with police officers.

Republicans are likely to stick with Trump, although McConnell was central to passage of a 2018 criminal justice sentencing overhaul the president signed into law, and some key GOP senators have similarly expressed interest in changes to policing practices and accountability.

Sen. Lindsey Graham, R-S.C.,chairman of the Senate Judiciary Committee, has said his panel intends to hold a hearing to review use of force and other issues. And Sen. Mike Lee, R-Utah, has said he’d like to review the package coming from Democrats.

Rep. Will Hurd, R-Texas, who marched in support of Floyd in Houston, penned an op-ed Monday about how his own black father instructed him as a teen driver to respond if he was pulled over by the police. Hurd offered his own proposals for changes in police practices.

What started with the Black Lives Matter movement after the death of Michael Brown in Ferguson, Mo., has transformed with the killings of other black Americans into a diverse and mainstream effort calling for changing the way America polices its population, advocates say.

“I can’t breathe” has become a rallying cry for protesters. Floyd pleaded with police that he couldn’t breathe, echoing the phrase Eric Garner said while in police custody in 2014 before his death in New York.

“All we’ve ever wanted is to be treated equally — not better, not worse,” said Rep. Hakeem Jeffries, D-N.Y.