There’s a video interlude during the “Gold Over America Tour” that Simone Biles spent the fall headlining where she offers advice to the audience of predominantly young women on how to deal with adversity.

“Regroup, reset, and everything will be just fine,” she says.

The seven-time Olympic medalist — the most decorated gymnast of all time — knows what she’s talking about.

Three months ago, on the other side of the world, Biles removed herself from competition in the middle of the team final at the Tokyo games. The 24-year-old did it for her own personal welfare while she battled what is known as “ the twisties,” a phenomenon that didn’t allow her mind and body to get in sync enough to allow her to safely do what she’s done as well as anyone in the history of her sport. 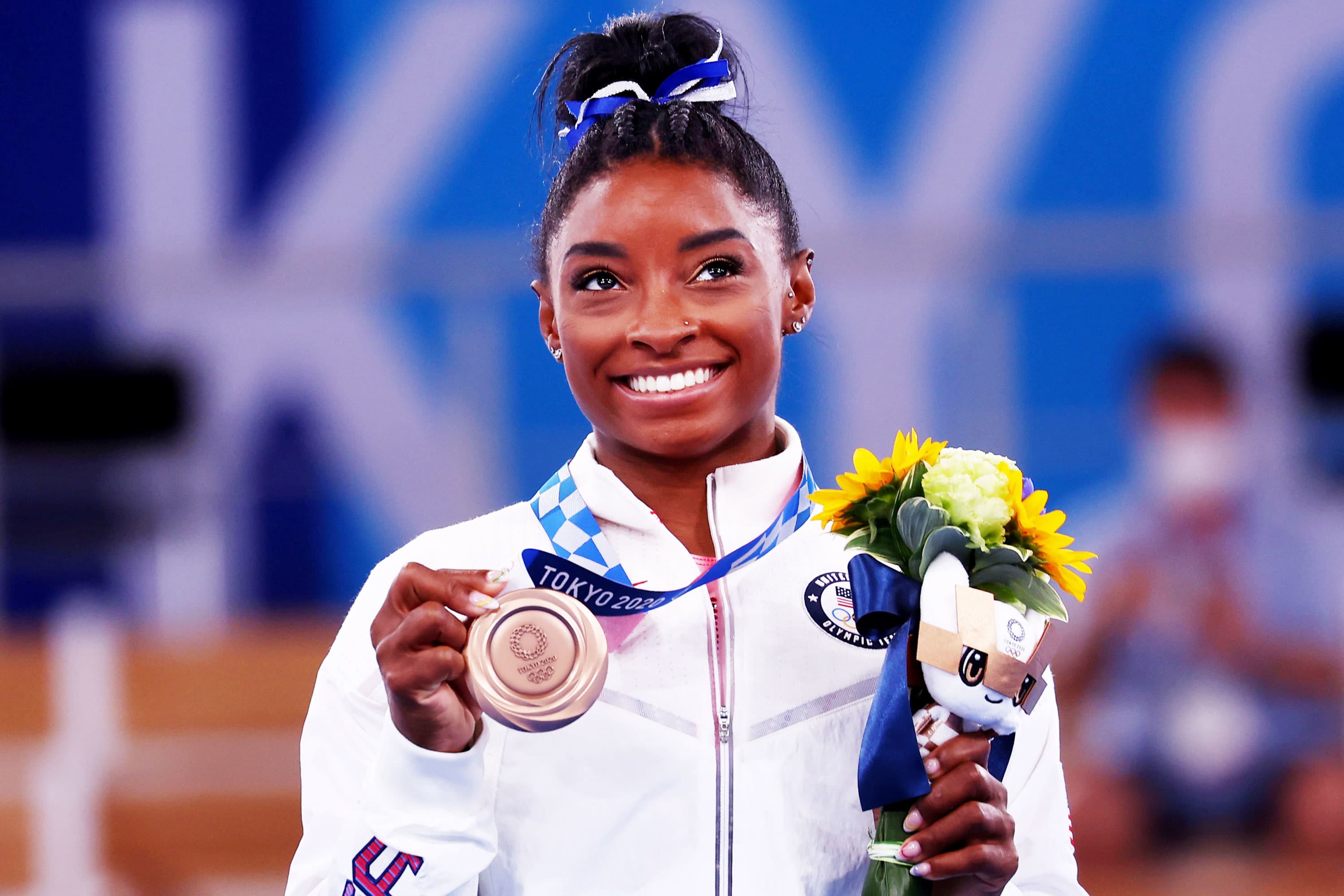 The decision further spurred a rapidly evolving discussion about the role that proper mental health plays not just for athletes, but for everyone.

“It was very alarming (in the moment),” Biles recently told The Associated Press. “(My body) told me like, ‘Hey, enough is enough, you got to go get help.’”

She did, and returned on the final day of the meet to earn a bronze medal on beam. Biles went home not with a fistful of gold as she did after her breathtaking performance in Rio de Janeiro in 2016 but with something more valuable: a clean slate mentally.

Simone Biles arrives back home in Houston after her leaving the Olympics in Tokyo.

Having a post-Olympic tour to lead also helped. Biles never considered bailing on it. If anything, she needed the tour — which wrapped up a 32-city sprint Sunday in Boston — to help her and fellow Olympic teammates Jordan Chiles, MyKayla Skinner, Jade Carey and Grace McCallum (as well as world champions Chellsie Memmel and Morgan Hurd, among others) step out of the hyper-pressurized bubble of elite gymnastics.

“It’s kind of that break we needed, in the best sort of way,” Biles said.

The “GOAT” tour allowed Biles to reconnect with the energy of a crowd, energy that was palpably missing inside the spectator-free Ariake Gymnastics Centre in Tokyo.

When she initially announced the tour in fall 2019, she viewed it as an alternative to the typical post-Olympic tour run by USA Gymnastics. She wanted something “completely different.”

The two-hour celebration of gymnastics, self-care and mental well-being seems aptly suited for an audience that’s spent nearly two years grappling with the stress of the COVID-19 pandemic. The tour also shifted the focus around the sport back to the joy of simply doing it just to do it.

“I think we’ve definitely changed the outlook on gymnastics because it’s had a bad rep for a couple of years now,” Biles said. “So for kids and parents to come and see the show, they’re like, ‘You can still have fun.’ This is normal.”

The show isn’t quite over — the “Gold Over America Tour” will hold a streaming event at 4 p.m. EST Dec. 4, a decision Biles made in an effort to share her vision with those who couldn’t make it in person.

“At least we’ll have that opportunity to be able to be in their living rooms and feel like they’re there with us,” she said.

For now, a post-tour trip to Belize awaits. And while Biles jokes that she “would love to burrow in a hole or an island for two months,” it’s not an option. If anything, it’s possible her “it’s OK to not be OK” stand in Tokyo raised her profile more than if she would have just gone out there and dominated just as she’s done for the better part of a decade.

Simone Biles fields questions from the media after she stopped competing before the end of the women’s team gymnastics final during the Tokyo Olympics.

Biles is intent on using her platform to become an advocate for mental well-being, even as she stresses she’s hardly an expert on what it takes to find balance.

“I’m not trying to tell you how to navigate your journey,” she said, in part because she’s still on her own.

The success of the tour has forced her to recalibrate her future. She’s going to wait to make any hard decisions about whether she’ll return to competition.

Yet, she can see a day where the “Gold Over America Tour” becomes a post-Olympic fixture, with her name attached as a presenter if not a performer.

Chiles, who has grown close with Biles since joining World Champions Centre — the massive gym Biles’ family owns in the northern Houston suburbs — called her friend “a businesswoman at heart.”

Whether any of that “stuff” means a run at the Paris Olympics in three years remains to be seen. One thing Biles has learned is that she’s not tethered to gymnastics; the sport she helped redefined will not be the only thing that defines her.

So it’s time to take a break. Maybe a permanent one, maybe not. Either way, she’s good.

“I know if I walked away from the sport, I know there are other things and different avenues out there,” Biles said. “For me, it’s just finding out what I really want to do.”