Nearly two years into the COVID-19 pandemic, the world raced Friday to contain a new coronavirus variant potentially more dangerous than the one that has fueled relentless waves of infection on nearly every continent.

A World Health Organization panel named the variant “omicron” and classified it as a highly transmissible virus of concern, the same category that includes the predominant delta variant, which is still a scourge driving higher cases of sickness and death in Europe and parts of the United States.

“It seems to spread rapidly,” U.S. President Joe Biden said of the new variant, only a day after celebrating the resumption of Thanksgiving gatherings for millions of American families and the sense that normal life was coming back at least for the vaccinated. In announcing new travel restrictions, he told reporters, “I’ve decided that we’re going to be cautious.”

Omicron's actual risks are not understood. But early evidence suggests it carries an increased risk of reinfection compared with other highly transmissible variants, the WHO said. That means people who contracted COVID-19 and recovered could be subject to catching it again. It could take weeks to know if current vaccines are less effective against it.

In response to the variant's discovery in southern Africa, the United States, Canada, Russia and a host of other countries joined the European Union in restricting travel for visitors from that region, where the variant brought on a fresh surge of infections.

The White House said the U.S. will restrict travel from South Africa and seven other countries in the region beginning Monday. Biden issued a declaration later Friday making the travel prohibition official, with exceptions for U.S. citizens and permanent residents and for several other categories, including spouses and other close family.

Medical experts, including the WHO, warned against any overreaction before the variant was thoroughly studied. But a jittery world feared the worst after the tenacious virus triggered a pandemic that has killed more than 5 million people around the globe. 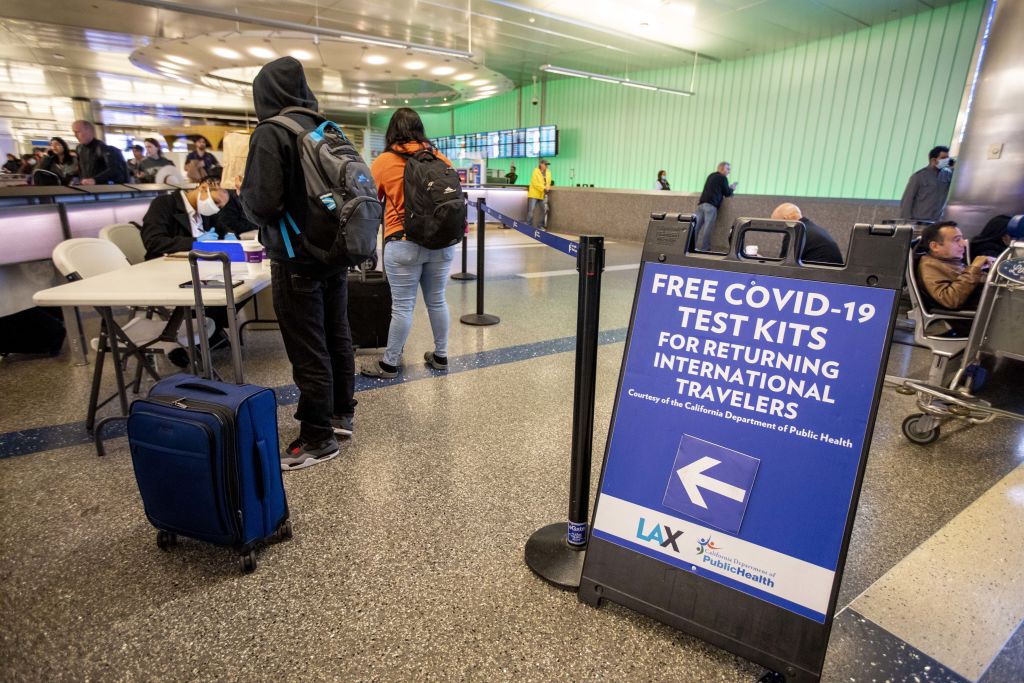 Omicron has now been seen in travelers to Belgium, Hong Kong and Israel, as well as in southern Africa.

There was no immediate indication whether the variant causes more severe disease. As with other variants, some infected people display no symptoms, South African experts said. The WHO panel drew from the Greek alphabet in naming the variant omicron, as it has done with earlier, major variants of the virus.

Even though some of the genetic changes appear worrisome, it was unclear how much of a public health threat it posed. Some previous variants, like the beta variant, initially concerned scientists but did not spread very far.

Fears of more pandemic-induced economic turmoil caused stocks to tumblein Asia, Europe and the United States. The Dow Jones Industrial Average briefly dropped more than 1,000 points. The S&P 500 index closed down 2.3%, its worst day since February. The price of oil plunged about 13%.

“The last thing we need is to bring in a new variant that will cause even more problems,” German Health Minister Jens Spahn said. Members of the 27-nation EU have experienced a massive spike in cases recently.

Britain, EU countries and some others introduced their travel restrictions Friday, some within hours of learning of the variant. Asked why the U.S. was waiting until Monday, Biden said only: "Because that was the recommendation coming from my medical team.’’

The White House said government agencies needed the time to work with airlines and put the travel limits into effect.

EU Commission President Ursula von der Leyen said flights will have to “be suspended until we have a clear understanding about the danger posed by this new variant, and travelers returning from this region should respect strict quarantine rules.”

She warned that “mutations could lead to the emergence and spread of even more concerning variants of the virus that could spread worldwide within a few months."

“It’s a suspicious variant," said Frank Vandenbroucke, health minister in Belgium, which became the first European Union country to announce a case of the variant. “We don’t know if it’s a very dangerous variant.”

Omicron has yet to be detected in the United States, said Dr. Anthony Fauci, the U.S. government's top infectious disease expert. Although it may be more transmissible and resistant to vaccines than other variants, "we don’t know that for sure right now,” he told CNN.

Speaking to reporters outside a bookstore on Nantucket Island, where he was spending the holiday weekend, Biden said the new variant was "a great concern” that “should make clearer than ever why this pandemic will not end until we have global vaccinations."

He called anew for unvaccinated Americans to get their widely available doses and for governments to waive intellectual property protections for COVID-19 vaccines so they can be more rapidly manufactured around the world.

Israel, one of the world's most vaccinated countries, announced Friday that it also detected its first case of the new variant in a traveler who returned from Malawi. The traveler and two other suspected cases were placed in isolation. Israel said all three were vaccinated, but officials were looking into the travelers' exact vaccination status.

After a 10-hour overnight trip, passengers aboard KLM Flight 598 from Capetown, South Africa, to Amsterdam were held on the edge of the runway Friday morning at Schiphol airport for four hours pending special testing. Passengers aboard a flight from Johannesburg were also isolated and tested.

“It’s ridiculous. If we didn’t catch the dreaded bug before, we're catching it now,” said passenger Francesca de’ Medici, a Rome-based art consultant who was on the flight.

Some experts said the variant's emergence illustrated how rich countries’ hoarding of vaccines threatens to prolong the pandemic.

Fewer than 6% of people in Africa have been fully immunized against COVID-19, and millions of health workers and vulnerable populations have yet to receive a single dose. Those conditions can speed up spread of the virus, offering more opportunities for it to evolve into a dangerous variant.

“This is one of the consequences of the inequity in vaccine rollouts and why the grabbing of surplus vaccines by richer countries will inevitably rebound on us all at some point,” said Michael Head, a senior research fellow in global health at Britain’s University of Southampton. He urged Group of 20 leaders "to go beyond vague promises and actually deliver on their commitments to share doses.”

The new variant added to investor anxiety that months of progress containing COVID-19 could be reversed.

The Africa Centers for Disease Control and Prevention discouraged any travel bans on countries that reported the new variant. It said past experience shows that such travel bans have “not yielded a meaningful outcome.”

The U.S. restrictions will apply to visitors from South Africa, Botswana, Zimbabwe, Namibia, Lesotho, Eswatini, Mozambique, and Malawi. The White House suggested the restrictions will mirror an earlier pandemic policy that banned entry of any foreigners who had traveled over the previous two weeks in the designated regions.

The U.K. banned flights from South Africa and five other southern African countries and announced that anyone who had recently arrived from those countries would be asked to take a coronavirus test.

Canada banned the entry of all foreigners who have traveled to southern Africa in the last two weeks.

The Japanese government announced that Japanese nationals traveling from Eswatini, Zimbabwe, Namibia, Botswana, South Africa and Lesotho will have to quarantine at government-dedicated accommodations for 10 days and take three COVID-19 tests during that time. Japan has not yet opened up to foreign nationals. Russia announced travel restrictions effective Sunday.