The mother of the suspect in the shooting death of a police officer and an innocent bystander in Weymouth, Massachusetts on Sunday is speaking out about her son.

Emanuel Lopes's mother said on the phone that the mental health system failed her son, who had struggled with mental health issues.

She said she tried to get help for her son, most recently at South Shore Mental Health in Quincy, but he refused to take his medication.

She also said she has a restraining order against her son.

"I am heartbroken and I am extremely sorry," she said on the phone.

Authorities said Officer Michael Chesna, a five-year veteran of the Weymouth Police Department, was responding to a report of an erratic driver near South Shore Hospital shortly after 7:30 a.m. on Sunday.

Chesna, 42, saw the suspect, whom police have identified as 20-year-old Lopes, allegedly vandalizing a home on Burton Terrace.

"Lopes then attacked Officer Chesna, it is believed, with a large stone, striking him in the head, and Officer Chesna fell to the ground," Connor said.

According to authorities, Lopes grabbed Chesna's gun and shot him multiple times in the head and chest. Chesna was taken to South Shore Hospital, where he was pronounced dead.

Additional responding officers chased Lopes through the neighborhood, where he allegedly discharged Chesna's gun at least three times, killing an elderly woman in her home. Her name has not been released pending notification of family.

Missing Attachment Officer Michael Chesna, 42, and a woman whose name is yet to be released, are dead. They were allegedly shot by 20-year-old Emanuel Lopes early Sunday. After Warmer Wednesday, Cold Will Creep Back in to New England 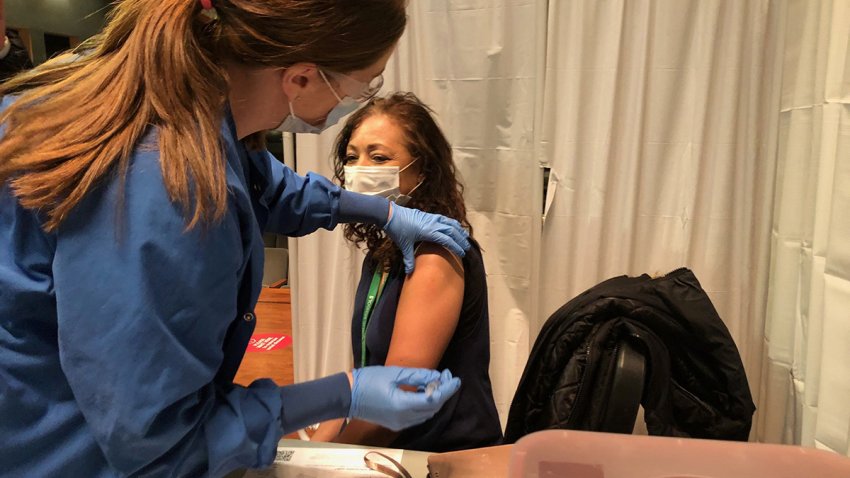 Massachusetts Teachers Eligible for COVID Vaccine Next Week: Here's How to Sign Up

"I am deeply saddened to learn of the passing of Officer Chesna and an innocent bystander today and my thoughts and prayers are with their families, loved ones and the @WeymouthPD after this tragic loss," Massachusetts Gov. Charlie Baker said on Twitter Sunday. The Commonwealth is forever grateful for the courageous men and women who risk their lives to serve and protect our communities every single day.

New England Patriots owner Robert Kraft stopped by the Weymouth Police Department on Sunday to share his condolences. "It's just terrible," he said.

Chesna, an Army combat veteran, is survived by his wife and two young children. Monday would have been his sixth anniversary as an officer with the Weymoth Police Department.

Weymouth Police Chief Richard Grimes described Chesna Sunday as a "family man" who "always had a kind and good attitude."

"He was one of those people who truly sought this job, was fortunate enough to get it, and very much appreciated it," Grimes said.

Chesna is the second officer to be killed in a shooting in Massachusetts this year. Yarmouth Police K-9 Sgt. Sean Gannon was shot and killed by a man who was hiding in an attic in April. His K-9 partner Nero was recently cleared for normal activity.