The New England Patriots are rolling.

On a short week, they earned a 25-0 road win over the Atlanta Falcons for their fifth straight victory. That brings their season record to 7-4, which will propel them to first place in the AFC East if the Buffalo Bills lose to the Indianapolis Colts on Sunday. 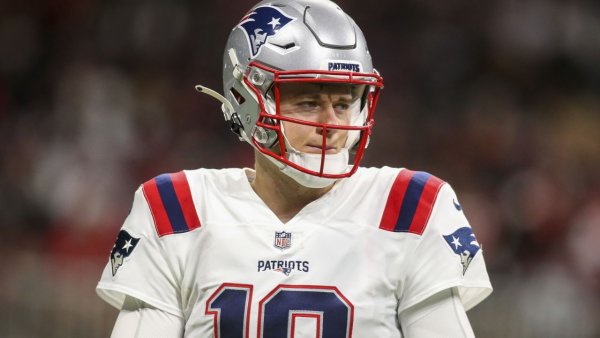 While it wasn't quite an offensive explosion like last week's win over the Cleveland Browns, it was another solid performance from Mac Jones. The rookie quarterback completed 22 of his 26 passes for 207 yards and a touchdown, though he was picked off by Falcons cornerback A.J. Terrell for his eighth interception of the season.

Next up for the Patriots is a big game against the AFC South-leading Tennessee Titans next Sunday at Gillette Stadium.

Here are a few immediate takeaways from Patriots-Falcons.

The Patriots defense followed last week's strong outing vs. Cleveland with an even more dominant performance vs. Atlanta on Thursday night.

Several names on the defensive side of the ball made an impact, starting with second-year safety Kyle Dugger and rookie defensive tackle Christian Barmore. Dugger set the tone for the shutout with with an active first quarter and finished with seven tackles to go with a pass defensed. He helped to limit first-round tight end Kyle Pitts to a modest three catches for 29 yards.

Barmore put constant pressure on Falcons quarterback Matt Ryan. The Alabama product finished with a tackle for a loss and a quarterback hit in the box score. It was a repeat performance for the second-rounder after he put Baker Mayfield under duress throughout Sunday's blowout win.

Also coming up big for the second straight week was linebacker Kyle Van Noy, who tallied two sacks and added a pick-six off reserve QB Josh Rosen late in the fourth quarter.

Matt Judon continued his outstanding debut season in New England by notching sack No. 10.5 of the season, a career-high.

Davon Godchaux added a sack of his own -- his first of the year -- early in the fourth quarter.

Ryan was picked off twice in what marked another nightmare of a game for Atlanta's offense. Devin McCourty and J.C. Jackson came up with interceptions in the fourth quarter. Jackson's sixth interception of the season passed Hall of Famer Mike Haynes for the most INTs through a player's first four seasons in Patriots history (23).

Alexa, why do they call him @MR_INT?

Just to top it all off, Adrian Phillips picked off Felipe Franks at the end of the fourth quarter on the third-string QB's first pass attempt of the season.

.@Phillips_17 ends the night with an INT.

The biggest plays of the night came courtesy of Dont'a Hightower, Carl Davis, and Adrian Phillips. After the Falcons picked off Mac Jones late in the third quarter and got themselves to New England's 16-yard line, Hightower stuffed the run on third-and-1. Atlanta went for it on fourth-and-1 and were stuffed once again on a joint effort by Davis and Phillips.

This game was all about the Patriots D, but don't sleep on the running game.

New England totaled 134 yards on the ground to mark its seventh straight game with more than 100 yards rushing. The Patriots haven't had such a stretch since 2012.

Damien Harris accounted for 56 yards on 10 carries, including this 17-yard scamper late in the first quarter.

.@DHx34 is back breaking tackles.

Rookie running back Rhamondre Stevenson, who put on a show with Harris sidelined last week, carried the ball 12 times for 69 yards. The third-round pick out of Oklahoma had an incredible 36-yard run called back on a hold in the fourth quarter.

With a smart quarterback, strong running game and a suffocating defense, this Patriots team looks like it'll be tough to beat in the second half of this NFL season.

3) The Falcons are incompetent

Despite throwing two interceptions and being sacked four times, Matt Ryan wasn't the problem for Atlanta in its second straight horrific loss.

The Falcons were out of sorts from the get-go. In the second quarter, kicker Younghoe Koo drilled a 45-yard field goal that should've put Atlanta on the board and made it a 10-3 game. Instead, an illegal formation penalty was called and Koo was forced to retry the kick from 50 yards out. Of course, he missed it, and the Falcons were left with a goose egg they'd keep for the rest of the contest.

The embarrassment didn't end there, either. Two Falcons wide receivers ran their routes straight into one another during the third quarter.

And one last note before we quit picking on Atlanta, the Falcons have been outscored 68-3 in their last two games. Yikes.