Nicholas Scaglione, of Cranston, was arrested on Tuesday and charged with attempted malicious destruction of a vehicle by fire for the June 2 incident

A second man has been charged in connection with the burning of a Providence police cruiser during a violent night in the city in early June, federal prosecutors said Wednesday.

Nicholas Scaglione, 30, of Cranston, was arrested on Tuesday and charged with attempted malicious destruction of a vehicle by fire, according to a statement from the office of Aaron Weisman, the U.S. attorney for Rhode Island.
Scaglione was freed on $10,000 unsecured bond.

His attorney, William Dimitri, said he had no comment on the case when reached Wednesday.

Luis Joel Sierra, 34, of Providence, was arrested last Friday on the same charge. He remains in custody. An email seeking comment was left Wednesday with his federal public defender.

Authorities allege Sierra poured lighter fluid into the interior of the cruiser and ignited it in the early morning hours of June 2 as a crowd rampaged outside the Providence Place mall. The violence in Providence came amid nationwide protests over the police killing of George Floyd in Minneapolis, but Rhode Island authorities say the people in the crowd were not protesters but a “mob” bent on destruction.

Scaglione squirted a flammable liquid into the vehicle, causing the fire to intensify, prosecutors said. Providence Officer Placed on Leave in Wake of Violence 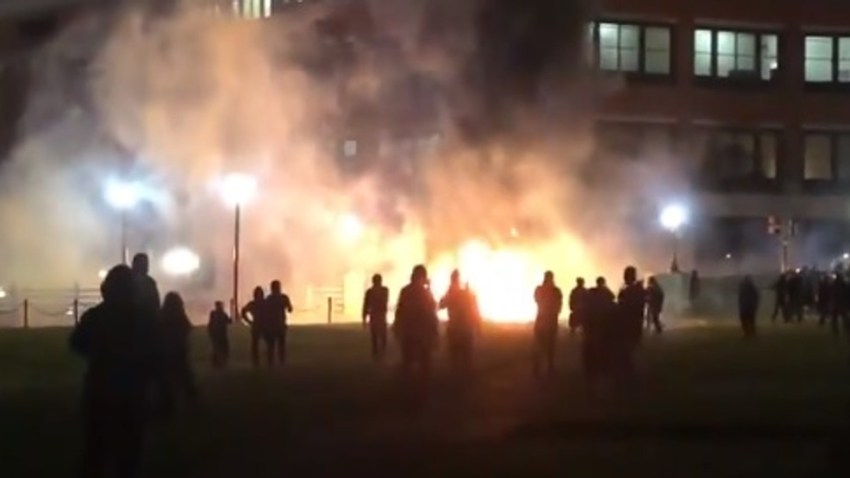 The cruiser became fully engulfed and was destroyed.

Both men were charged based in part on emails, telephone calls, text messages and video clips exchanged with others, prosecutors said, including a text in which Scaglione allegedly wrote: “That was pent up years of rage and frustration with the way I’ve seen and been treated by police. That cop car can be replaced. People’s lives cannot.”

The FBI earlier this month released a poster that included surveillance images of two men wanted for questioning in the case and offering a reward for information into the cruiser’s arson.

If convicted of the charge, the men face a maximum of 20 years in prison.