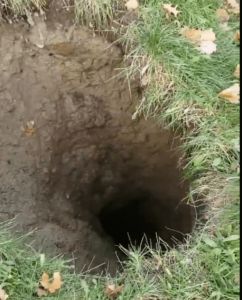 Over the weekend, we came across a video on social media of what was described as a giant sinkhole in Dorchester's Ronan Park, about 40 feet deep.

What on earth caused this?

Either way, 311 has been alerted and hopefully no one will fall down that hole before it’s repaired. Yikes.

The post Holy Sinkhole! Spotted in Dorchester appeared first on Caught In Dot.