Mostly Clear Wednesday Ahead of Possible Showers for Some on Thursday

It snowed a half-inch in the Northeast Kingdom of Vermont today as exceptionally cold air for this time of year begins to overspread New England for the next week or so.

So far, the cold is limited to our northernmost communities. Expect a cool and mostly clear overnight ahead of a mostly clear Wednesday as a round of wet weather misses us to the south, then consolidates around a second storm center south of New England.

The system will pass close enough to raise our chance of showers late day and into Thursday near the south coast, though significant rainfall amounts are not forecast.

Sunshine continues central and north with highs mostly in the 50s Thursday and Friday. Then another batch of even colder air dislodged from the North Pole and migrating south arrives Friday with rain developing at night with the potential for a period of accumulating snow in parts of New England.

Regardless of how the storm developing on the leading edge of the chilly air evolves, we're sure to see a burst of unusual cold for this late in the spring season Saturday, with highs in the 30s and 40s.

As the wind quiets Saturday night, the chance for frost is high deep into southern New England, excepting the urban areas, leading to a cool but dry Mother's Day with sunshine. 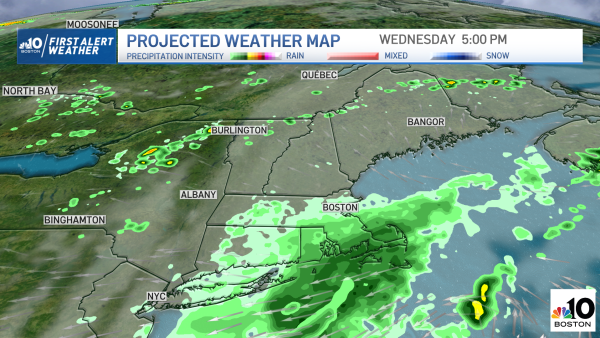 Wednesday Will Be Cloudy, But the Rain Won't Come Until Later in the Week

Next week, much of the week will continue cooler than normal, but temperatures slowly moderate and starting at the very last day of our exclusive First Alert 10-day forecast.