After a cool start to the week, the anticipated stretch of mild days begins Wednesday and runs through Friday for nearly all of New England.

With the exception of northern Maine, most New England communities will climb to the 60s and even just above 70 degrees Wednesday afternoon under a blend of sun and clouds with a diminishing wind after a breezy first half of the day for some.

Although clouds mix in with sunshine at times as a weak upper atmospheric disturbance moves overhead, no raindrops are expected and a partly cloudy fall night follows.

The bright overnight moon is just past the full Hunter's Moon, still casting plenty of light and thereby dimming the display of the Orionid meteor shower, which peaks early Thursday morning. Usually, New Englanders can see 20 meteors per hour streaking across the night sky in the Orionids, but with so much extra light from the moon, chances are good we'll see closer to five per hour this year.

A strengthening southwest wind Thursday ahead of a slowly approaching storm center moving east through the Great Lakes will mean milder air continues pouring into New England under variable clouds with high temperatures reaching the 70s for all but the far North Country, where an isolated shower is possible from time to time. The nearing storm center is expected to divert northeast across Ontario and Quebec Friday, but a trailing cold front will enter New England while slowing to a crawl, delivering a few overnight Thursday night showers that will tend to weaken predawn Friday ahead of lingering clouds that will mix with limited sun.

In Vermont, Friday will be a cool day with highs in the 50s, but for most of the rest of New England, being ahead of the cold front will mean one more day of temperatures near 70 degrees before the front eases through southern New England Friday night, leaving cooler air for the weekend and beyond. 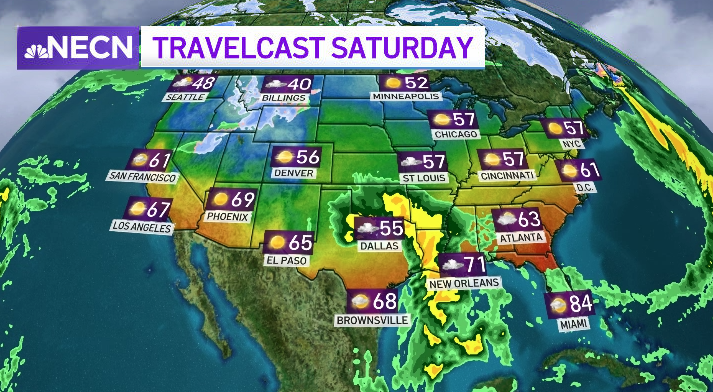 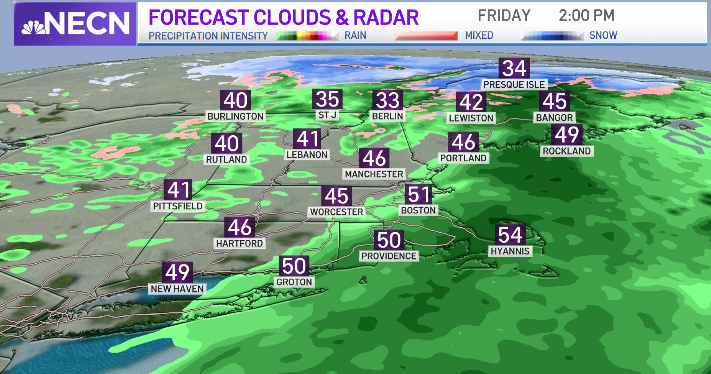 Saturday, a disturbance aloft will prompt weak storm development along the slowly departing cold front, meaning showers become increasingly likely, particularly in southern New England and especially during the afternoon to evening, but as that small storm center moves east of New England, the counter-clockwise flow of air around it will induce a slightly stronger north and northwest wind into Sunday, reinforcing cool air and drying most of New England out.

The exception to drying on a northwest wind often is in the mountains of Northern New England, where this wind direction pushes up against the mountain slopes, creating scattered rain showers that may be mixed with snow in the highest terrain Sunday.

It looks like fall chill will prevail for most of next week in our exclusive First Alert 10-day forecast, with an attempt of returning mild air at the end of next week leading to increased clouds and a rising chance of showers.