Thousands Without Power as Nor'easter Slams Into Mass.

The rain made for a messy start to Tuesday morning, causing heavy delays, including a crash in the O'Neill Tunnel on the northbound side of the expressway

The first nor'easter of the season caused heavy traffic delays and power outages in Massachusetts Tuesday, even before storm intensified by nightfall.

More than 29,000 people were already without power in Massachusetts as of 11:59 p.m. Tuesday, with winds gusting around 30-40 mph. As the storm strengthens, our First Alert weather team is forecasting up to 70 mph winds by Tuesday night into Wednesday morning, threatening power outages from downed trees, branches and power lines.

Hundreds of crews were spread out across the state, according to officials with both National Grid and Eversource, positioned to respond to outages from the extreme wind.

“In preparation, we’re making sure our crews are ready to go, our equipment is ready to go, so we can respond to any potential outages that come," Eversource spokesperson Chris McKinnon said.

The threat for damaging winds in excess of 60 mph will continue overnight, mainly in eastern Massachusetts, especially on Cape Cod and the Islands, as well as the immediate coast. There will be 40-50 mph gusts farther inland, still capable of producing minor damage.

A large tree branch came down Tuesday night in Cohasset, and the power was out on Chief Justice Cushing Highway.

Many South Shore areas were in the dark late Tuesday.

In Scituate, there was a large tree down across Beaver Dam Road.

The storm was already impacting commuters earlier in the day, as well.

The rain made for a messy start to Tuesday morning, causing miles of delays, including a crash in the O'Neill Tunnel on the northbound side of the expressway.

The MBTA shut down ferry service due to the weather. Boats to Charlestown and Hingham will not run Tuesday or Wednesday. The Steamship Authority suspended all ferry service to the islands as of 6 p.m.

Along the coast, residents were getting ready for impact -- some were even watching the waves crashing ashore.

"I love to see what storms do to the ocean," said Dianne Finch in Rockport.

In Falmouth, the Cape is bracing for heavy rain and strong winds -- at least one vehicle had already gotten stranded in flood waters in the community's downtown neighborhood. Going into Tuesday night, they are expecting three or more inches of rain and 12-to-17-foot seas.

Communities on Cape Cod and the North Shore and South Shore of Massachusetts are bracing for heavy winds, power outages and potential flash flooding as a result of the nor'easter moving through the region.

Some coastal erosion and flooding are expected, and the Cape is bracing for possible power outages. Boat owners are preparing and securing their vessels.

Along the South Shore, Tuesday morning brought mostly light breezes, some rain and fast moving clouds. But it ramped up going into Tuesday night.

Boaters in Plymouth rushed to pull out their boats before the storm. The Plymouth harbormaster said they hauled out about 20 or 30 boats.

Many recreational boaters took their boats out last month, but some left them in due to the recent warm weather.

Eric Smith, the Gloucester fire chief, said that some damage was expected, but that residents should be careful for other reasons.

The first nor'easter of the season was already causing heavy traffic delays and power outages in Massachusetts Tuesday morning, and the storm is only expected to intensify as the day goes on.

"We really can't stress enough that people operate as safely as they can in their homes and don't do those things that could potentially lead to a fire and then pull us out there in suboptimal conditions," he said.

Some people have adapted their plans to stay safe, like Pat Clarke, from Plymouth. He was supposed to travel to Western Massachusetts this week.

“When we heard about the weather we change our minds and thought we’d better get home,” Clarke said. “There will be a lot of wind, rain and streets flooded and trees down, so here we are.”

A tree came crashing down on powerlines around 4:30 a.m. on Walnut Avenue in Braintree, Massachusetts. Crews were trying to clean up that scene Tuesday morning. 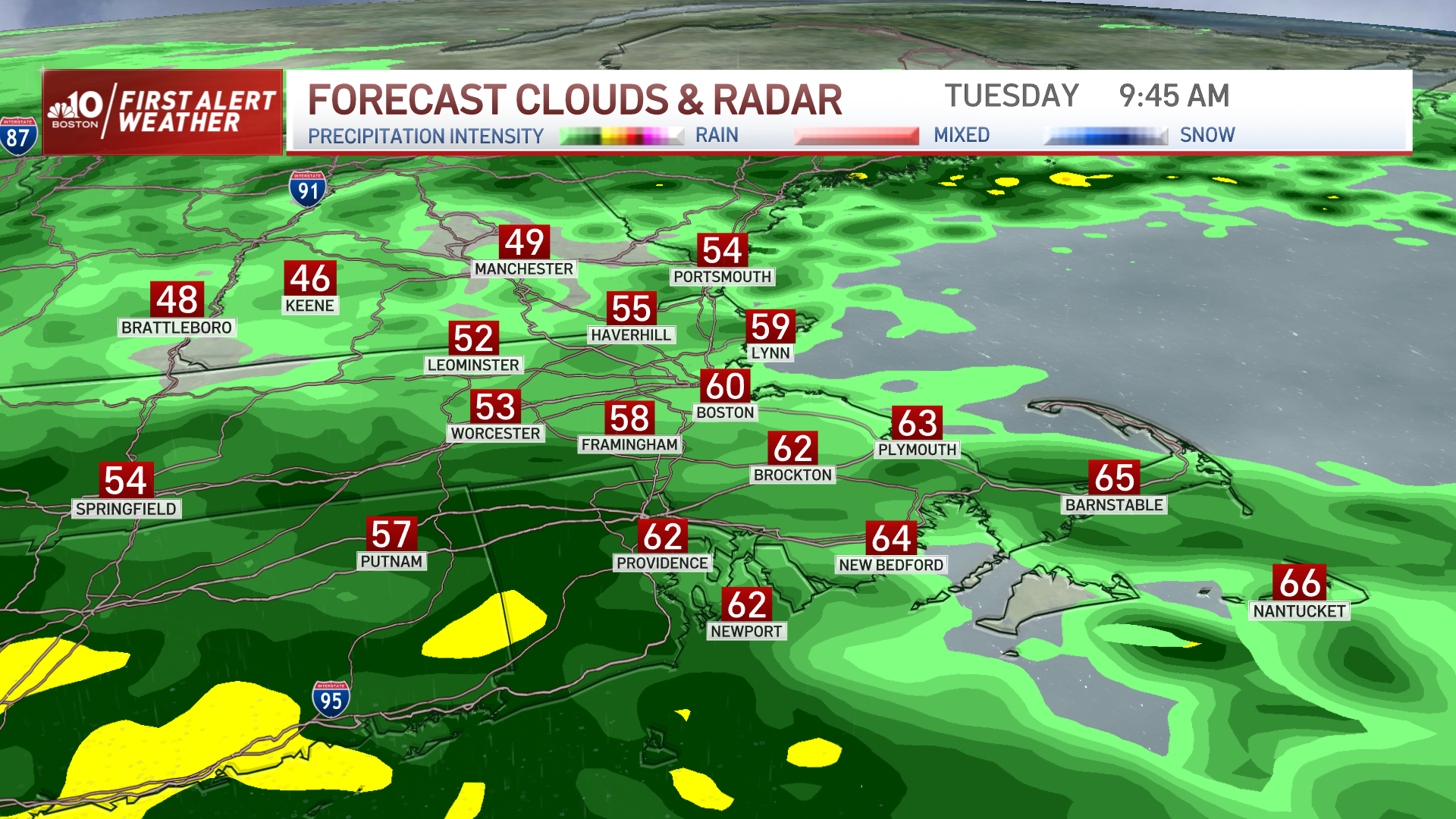