In all, 254 people were killed in Gaza in this war, including 67 children and 39 women. according to the Gaza health ministry

The al-Kawlaks, a family of four generations living next door to each other in downtown Gaza City, were utterly unprepared for the inferno.

Like others, they were terrified by the heavy bombing in Israel's fourth war with Gaza's Hamas rulers that began May 10. The explosions felt more powerful than in previous fighting. At night, parents and children slept in one room so they would live or die together.

Yet the relatively well-to-do Rimal neighborhood where the family lived in a cluster of apartment buildings seemed somewhat safer than areas along Gaza’s border with Israel, which had been devastated in this and past fighting.

Then one night disaster struck. Azzam al-Kawlak’s four children had gone to bed, and he and his wife were preparing to join them.

At around 1 a.m. on May 16, a thunderous boom shook his top-floor apartment, followed quickly by a second and third. “The floor cracked below our feet and the furniture was thrown to the wall,” the 42-year-old engineer said.

The four-story building collapsed, with Azzam’s apartment dropping to the ground. The family escaped through the kitchen balcony, now almost ground level. Bizarrely, the laundry hanging on a clothesline seemed untouched.

It took a day for the full horror to emerge, as bodies and survivors were pulled from the rubble. The family and neighbors used ropes to clear chunks of concrete, working alongside ill-equipped rescue teams.

By nightfall, the family's death toll stood at 22. Eight bodies were dug out of Azzam’s building and 14 from the one next door. The dead included 89-year-old family patriarch Amin, his son Fawaz, 62, his grandson Sameh, 28, and his great-grandson, 6-month-old Qusai.

The bombing along several hundred meters (yards) of al-Wahda Street took just minutes. In all, it brought down three houses — two in the al-Kawlak compound and one nearby — and killed a total of 43 people, making it the single deadliest air raid of the 11-day war.

Israel said the target was a Hamas tunnel underneath the street, part of what it called a roughly 350-kilometer-long (220-mile) underground network. The tunnels served offensive and defensive purposes, military officials said, accusing Hamas of using civilians as human shields.

Lt. Jonathan Conricus, a military spokesman, acknowledged the many civilian casualties that night. “It’s not a totally mathematical exercise in choosing the ordnance,” he said, suggesting the military had miscalculated. He said Israel carried out dozens of airstrikes in areas just as densely populated, with far fewer casualties.

He said the army was reviewing the incident and “adjusting the analysis and the ordnance used in the future” to prevent similar events from occurring again. “It’s not a totally mathematic exercise in choosing the ordnance,” he said.

He said Israel carried out dozens of airstrikes in areas just as densely populated, with far fewer casualties.

Defense Minister Benny Gantz told foreign journalists this week that Israel does everything it can to avoid civilian casualties, but Gaza’s crowded urban landscape makes it virtually impossible to avoid them altogether

“Hamas is aiming to hit civilians by purpose and we are trying our best for that not to happen,” he said.

The fighting began May 10 after Hamas fired rockets toward Jerusalem in support of Palestinian protests against Israel’s heavy-handed policing of the Al-Aqsa Mosque compound, a site sacred to Jews and Muslims, and the threatened eviction of dozens of Palestinian families by Jewish settlers. In all, Hamas fired more than 4,000 rockets toward Israel during the war, while Israel said it struck hundreds of targets linked to militants in Gaza.

Israel carried out hundreds of air strikes in Gaza on Wednesday morning, as Hamas and other Palestinian militants fired rockets at Tel Aviv and Beer Sheva.

Two had serial numbers identifying them as fitted with Joint Direct Attack Munition kits manufactured by Boeing Co. at its factory in St. Charles, Missouri, to make them so-called “smart bombs,” able to be guided to a target by GPS or lasers. Boeing did not answer questions about the bombing, only saying in a statement: “In accordance with U.S. law, the U.S. government authorizes and provides strict oversight for all defense exports.”

Meqdad said that based on the fragments, the bombs that brought down the al-Kawlak homes were likely GBU-31s, packed with 430 kilograms (945 pounds) of high explosives. The GBU-31 typically is used for large buildings, but also can destroy underground targets, said N.R. Jenzen-Jones, the director of Armament Research Services, a specialist arms investigations firm.

The bombs carry a powerful blast, meaning surveillance, intelligence-gathering, pre-planning and the correct choice and explosive punch of the weapon should be carefully considered before an attack, he said.

“The intrinsic wide-area effects of large explosive munitions mean they must be used judiciously in the urban environment,” he said.

The Israeli military did not respond when asked what bombs were used in the al-Wahda Street strikes. 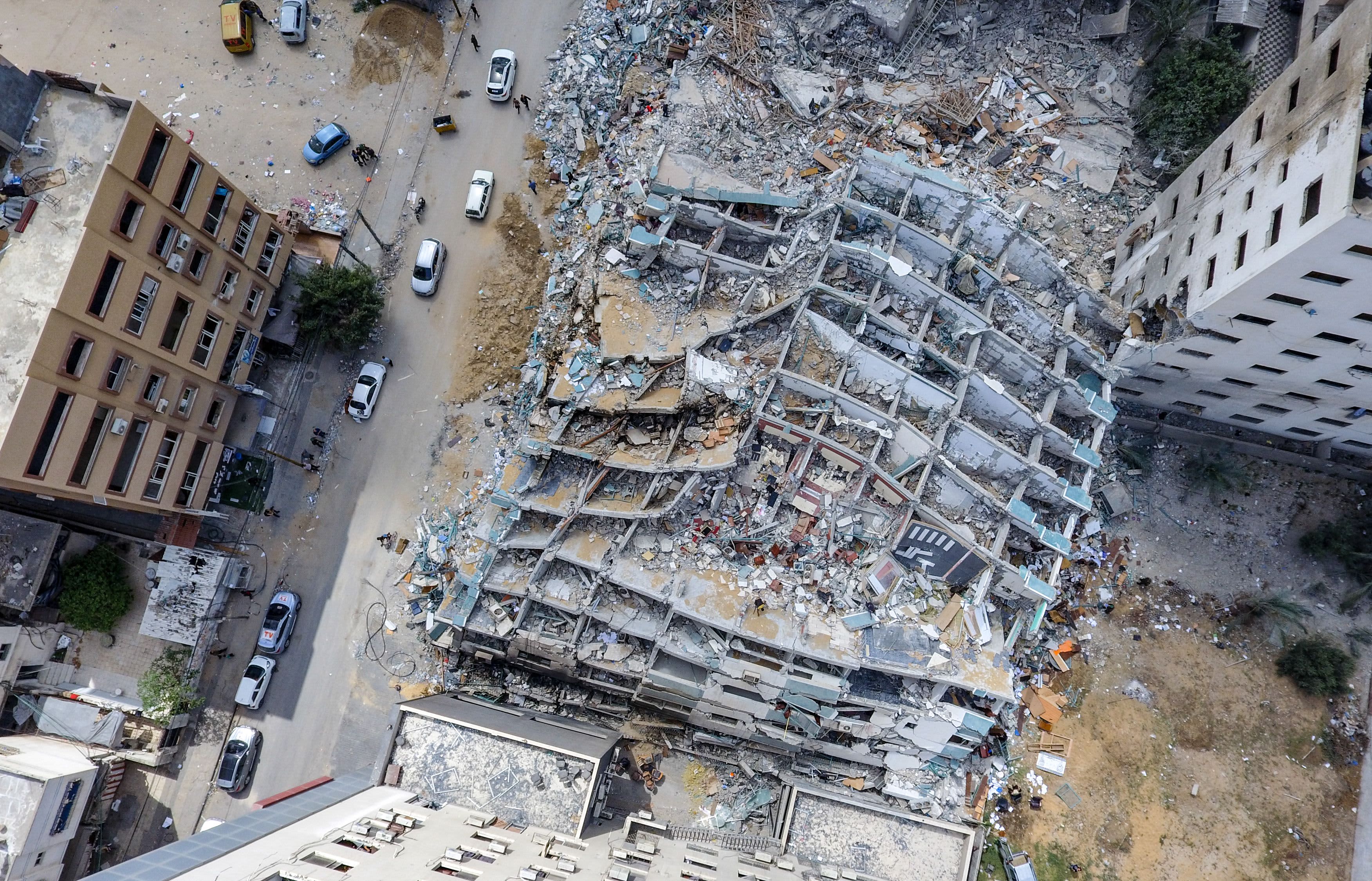 After Another War, Displaced in Gaza Face Familiar Plight

Earlier this year, the International Criminal Court began investigating Israel and Hamas for possible war crimes going back to the previous 2014 war. This includes random Hamas rocket fire toward Israeli communities — widely seen as a violation of the rules of war — and some of Israel’s deadliest practices, such as the toppling of high-rises that killed entire families in pursuit of militants.

Two Gaza rights groups — al-Mezan and the Palestinian Center for Human Rights — have been documenting Israel’s strikes and incursions for years. This time, they again interviewed survivors, including the al-Kawlaks, visited hospitals, took photos and collected death certificates, in preparation for possible new submissions to the ICC.

Samir Zakout of al-Mezan and Mohammed al-Alami of PCHR said they believe the al-Wahda Street bombings — along with other deadly airstrikes — violated the laws of war, arguing the value of any possible military target was dwarfed by significant harm to civilians.

Zakout accused Israel of intentionally using excessive firepower to sow fear, saying it was “one of the direct goals of the war.”

The Israeli military does not recognize the ICC, but says its airstrikes are cleared by lawyers to make sure they comply with international standards. During the fighting the military released video of what it said were air force teams calling off strikes because they spotted children in the vicinity. In many cases, it ordered occupants to evacuate buildings before bombing them.

International law professor Paola Gaeta said that “certainly we are witnessing something which is wrong,” referring to civilian deaths, but there is a high threshold for proving a war crime. This includes proving disproportionate use of force and intentional targeting of civilians, said Gaeta, who teaches at the Graduate Institute of International and Development Studies in Geneva.

If Israel says it made a reasonable mistake in calculating the amount of explosives in the al-Wahda Street strike, this could serve as a defense, she said.

In all, 254 people were killed in Gaza in this war, including 67 children and 39 women. according to the Gaza health ministry. Hamas has acknowledged the deaths of 80 militants. Eleven civilians, including two children, were killed in Israel, along with one soldier.

President Joe Biden spoke on Thursday after Israel and Hamas announced a cease-fire that ended a bloody 11-day war.

Awni al-Kawlak keeps 22 death certificates in a briefcase, along with the deeds for the two destroyed homes. A third family house was damaged and awaits demolition. The family business, a generator repair shop, was also destroyed. Two apartment buildings, including Awni’s home, remain intact.

Sitting in a courtyard behind the rubble, the 49-year-old shrugged when told of Israel’s apparent acknowledgement of error. “What will I do with this information?” he said. “I lost my livelihood and I lost my brothers and their children.”

The fear that justice will never come makes it harder for the family to deal with loss, he said. He worries that Gaza and its problems, including a suffocating blockade enforced by Israel and Egypt since 2007 to contain Hamas, will soon sink back into oblivion.

“We know that the world is now empathetic, but after a while it will forget our problem,” he said. “Even when they remember us again, they will remember us as numbers.”