Joe Biden vowed to address “institutional racism” in his first 100 days in office as he met with community leaders at a predominantly African American church in Delaware Monday morning, leaving home for a second consecutive day to address exploding racial tensions that have begun to reshape the upcoming presidential election.

Biden, the former vice president who will represent Democrats on the ballot against President Donald Trump this fall, has struggled in recent weeks to be heard from his basement television studio over the noise of dueling national crises. But after another night of violent protests, the 77-year-old Democrat gathered with roughly a dozen local black leaders during an intimate meeting in his hometown ahead of a virtual meeting with mayors from Los Angeles, Atlanta, Chicago and St. Paul, Minnesota. 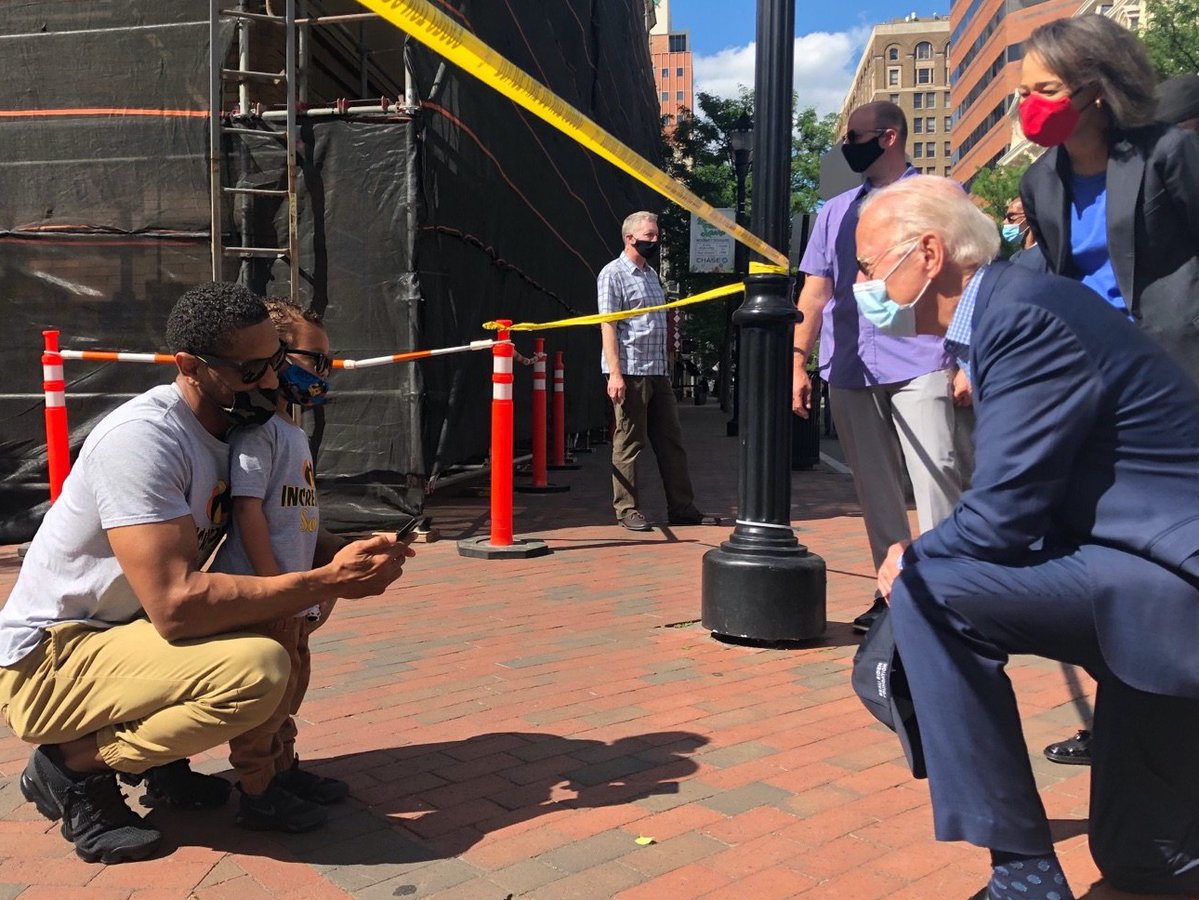 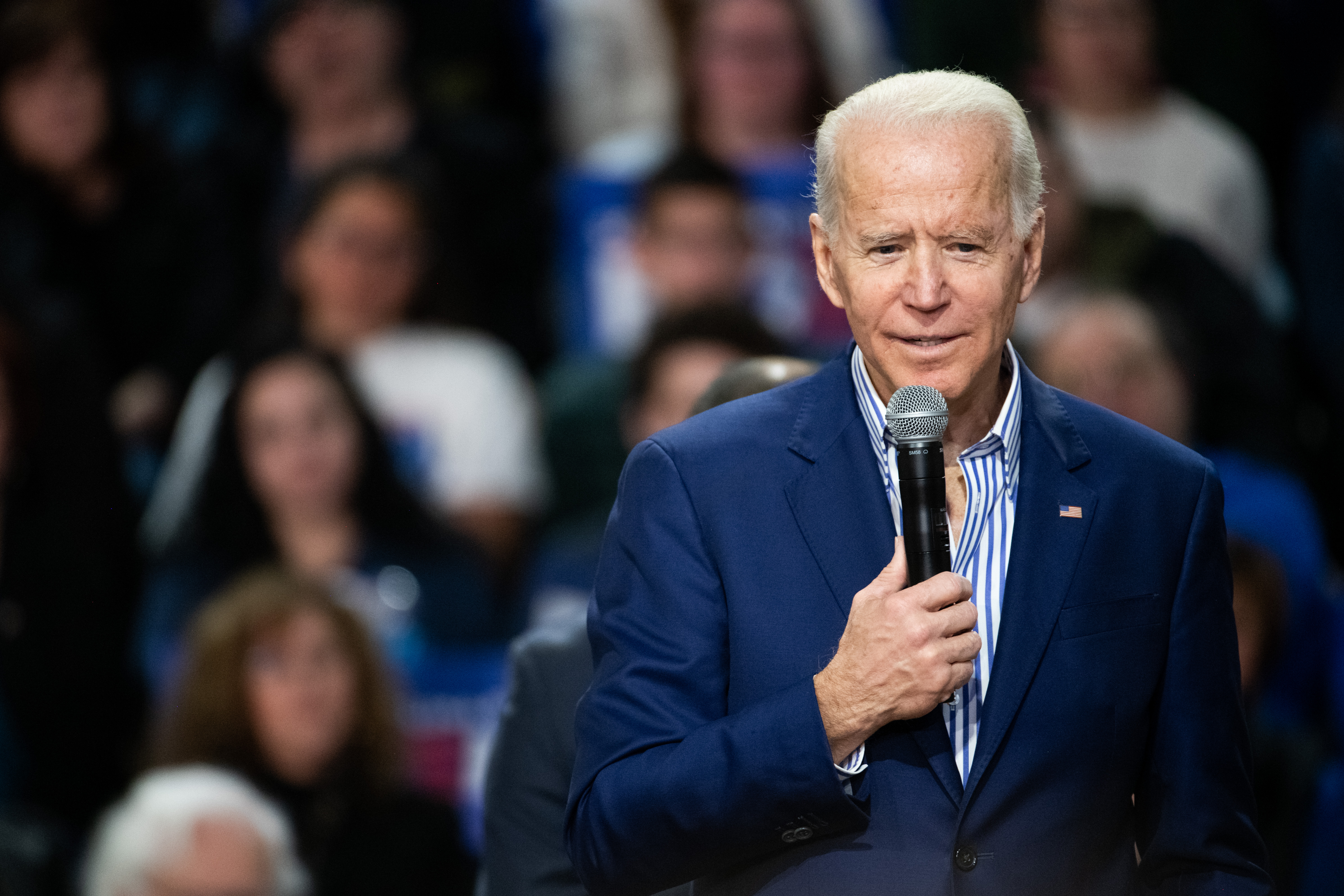 “Hate just hides. It doesn’t go away, and when you have somebody in power who breathes oxygen into the hate under the rocks, it comes out from under the rocks,” Biden said, his face mask lowered around his chin, after several participants shared their thoughts on police brutality.

If elected, he promised to “deal with institutional racism” and set up a police oversight body in his first 100 days in office.

Biden's low-key, high-touch approach marked a sharp contrast to that of President Donald Trump, who has made little effort to unify the country. The Republican president slammed governors as “weak” during a video teleconference Monday and demanded tougher crackdowns on protesters. Trump also lashed out at Biden on Twitter, writing that “Sleepy Joe Biden’s people are so Radical Left that they are working to get the Anarchists out of jail, and probably more.”

Biden's softer approach may foreshadow how he presents himself in the five months before the presidential election, emphasizing calm and competence as a contrast to a mercurial president. It is an approach that carries the risk of being drowned out by Trump's much louder voice.

“He’s not in office, and he certainly does not have the megaphone like the person currently occupying the White House does, but I do think our people are looking for someone who can make them feel better during these extremely tough times,” said Rep. Val Demings of Florida, whom Biden is considering as a running mate. “America just needs to be reassured that there’s someone who’s understanding, someone who’s willing to say, ‘Yes, we do have some issues,’ and someone who’s willing to address it.”

Reassurance requires presence, and that has been a hurdle for the former vice president, driven inside by the coronavirus pandemic, still working to adapt to the power of social media as a substitute and without the natural platform of a public office.

Biden delivered a well-received address on Friday calling on white people to shoulder the responsibility of ending America’s systemic racism. But he was largely out of sight over the weekend, which marked the fifth anniversary of the death of his son Beau Biden from brain cancer.

Monday marked just his third public appearance since the pandemic exploded in mid-March.

Biden and his wife, Jill, marked Memorial Day by laying a wreath at a veterans' memorial near his Wilmington home last week, and the former vice president’s campaign posted pictures of him visiting a protest site in the city on Sunday afternoon. Earlier, he wrote a post on Medium expressing empathy for those despairing about the police killing of George Floyd.

In the early moments of Monday’s gathering at the Bethel AME church in Wilmington, Biden listened quietly and took notes in a spiral notebook. All the attendees, including Biden, wore face masks but lowered them as they spoke.

“The vice president came to hear from us. This is a homeboy,” pastor Sylvester Beaman said before everyone bowed their heads in prayer.

Biden's standing with the black community weighs heavily as he works to deny Trump a second term. African Americans rescued Biden's flailing primary campaign earlier in the spring, but it's unclear if they will turn out for him in large numbers in November.

“I want to make something clear. I don’t expect anything from the black community," he said Monday, insisting he has never taken their support for granted. The former vice president has been doing cleanup since telling a prominent black radio host a week and a half ago that African Americans who back President Donald Trump “ain’t black.”

The morning gathering featured 15 religious, political and educational leaders, including Democratic Rep. Blunt Rochester. Pasted notices on the main entrance cautioned people from entering if they had a cough or other symptoms that could indicate they were suffering from coronavirus.

For his part, Trump has refused to wear a mask and has largely ignored social distancing guidelines issued by his administration's medical professionals.

Much of Biden's campaign strategy centers on trying to draw a contrast with Trump on temperament and values. He has called the White House contest a battle for the soul of the nation and has been particularly forceful in condemning Trump's handling of moments of racial tension.

Democrats note that Biden spoke about Floyd's death before Trump addressed it and has shown compassion for the protesters. Trump has alternated between expressing alarm over Floyd's death and sympathy for his family and issuing tweets antagonizing protesters and disparaging his political enemies.

In an election that is likely to be a referendum on the sitting president, some Biden aides say privately that the best plan may be to let Trump do himself in.

Yet there is also a recognition that Biden needs to do more than simply wait for voters who may be turned off by Trump to turn toward him. Some Democrats who have criticized Biden for not being more visible during the onset of the coronavirus said he is making the right moves now.

“I’m sure they have some reluctance, understandably, right now to politicize it. That's not who he is," said Democratic strategist James Carville. “There might be a time for eloquence, but I think that simplicity is eloquence right now.”

Catch up on the 2020 election campaign with AP experts on our weekly politics podcast, “Ground Game.”