Coldest Air of the Season Moves Into the Region

Low and mid-50s are possible on Thanksgiving as we shake off the cold and look ahead to a developing storm on Friday.

All the focus is on Thanksgiving in the next couple of days, but you may have noticed the change in the airmass. It’s hard to miss.

Highs today will struggle to make 40 as the “coldest air of the season” moves in. Sure, we’ll be saying that until February with every cold blast, but this one should put an end to the growing season along the immediate coast and officially bring the freeze to Boston (Logan Airport).

And you won’t miss the ground-hardening freeze tonight either. Some cold spots in the suburbs may reach down into the mid-teens as the winds collapse and the skies remain clear. You’d think that Wednesday would be a bone-chiller, but it seems that we at least crack 40 in many spots in the afternoon.

Then there’s Thanksgiving. By now, you know we aren’t talking about any storms (we would have been harping on that all week), but we are talking about a turnaround in temperatures. Low and mid-50s are possible as we shake off the cold and look ahead to a developing storm on Friday. 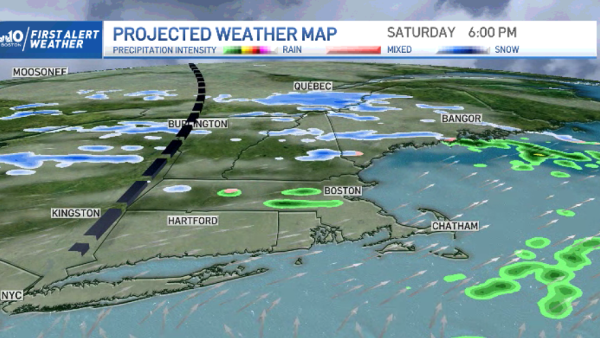 Temperatures Heading Below Average This Weekend

This one really is a weather-maker for Northern New England. It’s there that the snow may pile up on Friday night and through Saturday. Lots of people like to say, “Keep it in the mountains,” and this is certainly a case for that. Higher elevations in the north could see up to 6-10”, but down here, just a few passing flakes or a quick snow shower are possible into early Saturday morning. The finish to the holiday weekend will remain cold too. Highs both days will remain in the upper 30s to low 40s.

Enjoy the rest of the week and be safe!