Ready for a 70 Degree Day? Signs of Spring Bursting Forth

From spring peepers to awakening bears, spring is quickly advancing

Sure signs of spring continue unfolding across New England as mild air rolls on with daylight now increasing at nearly three new minutes per day and set to cross 12 hours Thursday for the first time since Sept. 25.

Peepers are sounding off in the evenings, crocuses are blooming, bears have been reported to be waking from hibernation and soft ground marks the arrival of mud season where snow has melted.

As we look ahead in our First Alert forecast, we see far more spring showers than snowflakes, though Wednesday brings a break from those showers after dawning beneath pockets of low-hanging clouds that persist after overnight showers departed.

With a light wind early in the day, clouds were stubborn but give way to a slug of incoming dry air that brings a fair sky with temperatures responding by reaching into the 50s to near 60 for many, particularly in central and southern New England.

Another hallmark of spring, however, is a sea breeze: as land warms and contrasts with cold ocean water, air rises over the warmer land and draws in air from the colder ocean, providing a chilling onshore wind until the land cools again at night, meaning afternoon temperatures can fall dramatically near the shore, and that’s expected Wednesday afternoon and again on many relatively mild days that lay ahead in the spring to early summer.

As the gentle wind slowly turns to blow from the south overnight Wednesday night, a warmer and more humid air will slowly trickle into New England across the cool ocean, and this will mean not only blossoming clouds anew, but also developing fog in much of Southern New England, most dense nearest to the South Coast.

Though fog will thin for many Thursday, it may linger near the coast and in Southeast New England as a slow-moving, energetic storm moves off the U.S. East Coast and passes south of New England, casting rain showers north across the southern half of New England Thursday afternoon, evening and night.

Though the storm center moves away from New England Friday, mild air remains and the return of sunshine will boost afternoon temperatures to near 70 degrees, though, again, a cooling sea breeze will be possible near the coast during the afternoon.

The next system in a rather busy pattern of progressive storms will arrive Saturday with returning rain, though enough cold air should stick around the North Country mountains for some snow and ice at the onset Saturday morning to midday, particularly in Maine, and perhaps for some mountain snow showers behind the storm’s departure Saturday night into Sunday.

Elsewhere in New England, periodic Saturday rain is expected before improving weather Sunday after an early morning shower may linger. 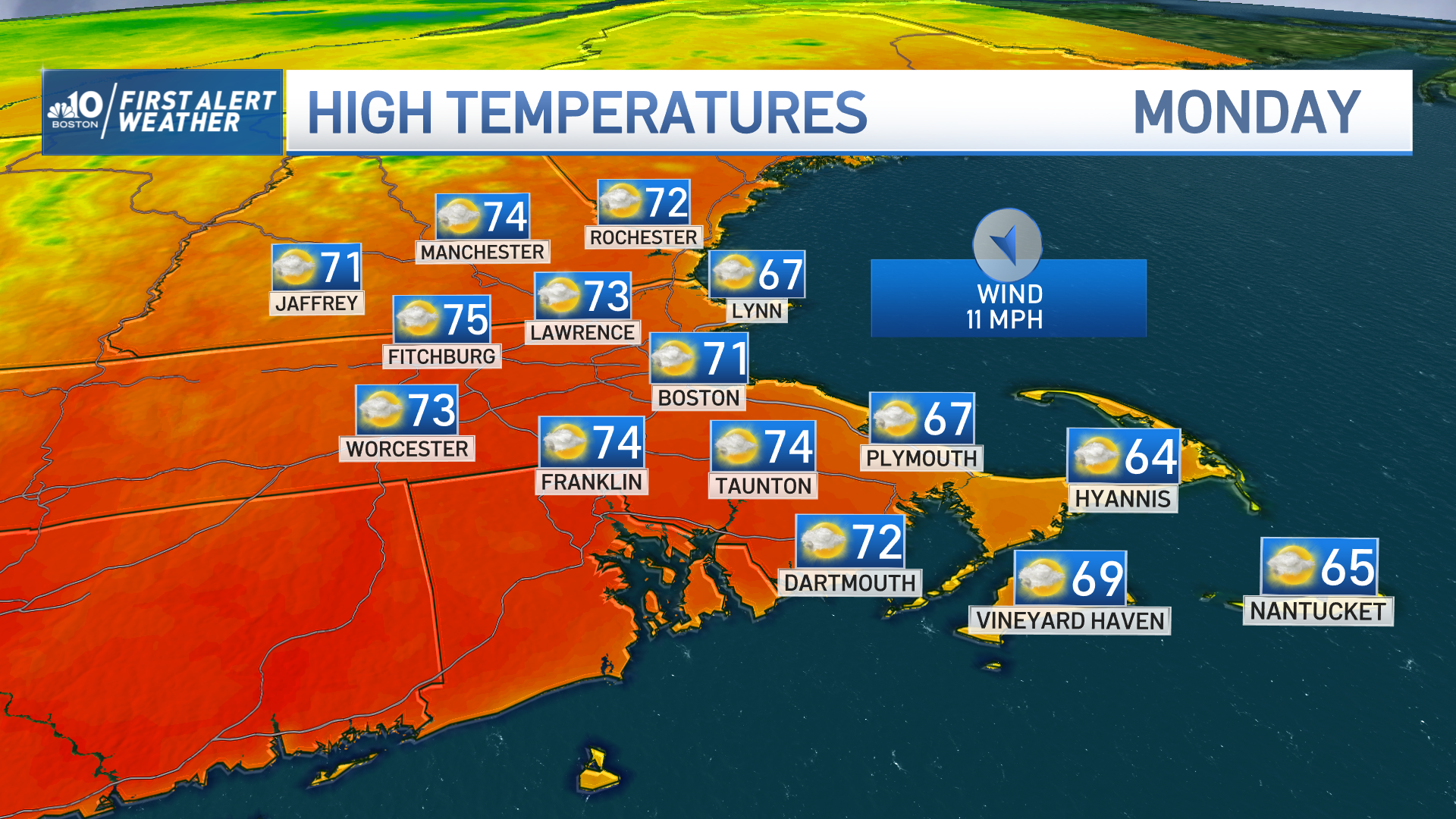 Overnight Rain Showers for Some as Spring Air Takes Hold

Heading through next week in our exclusive First Alert 10-day forecast, daytime temperatures look to hold in the 50s on most days – above normal for this time of year – with the next rain-making disturbance lined up for the second half of the week.