Although it’s all eyes on Gillette Stadium for Sunday Night Football on NBC10 Boston, much of the day leading into the football game looks fantastic for southern New England.

Sandwiched between offshore Hurricane Sam producing two to five foot waves with strong rip currents at our beaches and an approaching separate storm system from our north and west bringing showers throughout the day to foliage country of Northern New England.

The rest of us see morning sunshine giving way to afternoon clouds but showers holding off until evening and night with high temperatures either side of 70°. Northern New England is a wetter story with showers already under way Sunday morning and expected to increase through the course of the day.

The showers slowly expand southeast to the MA/NH border by middle to late afternoon and arrive at least in scattered form to Gillette Stadium in Foxborough sometime around kick off with a 40% chance of rain drops at the stadium when the game begins. The chance of rain for the Patriots game and Tom Brady’s return to Patriots Nation rises to 60% by the end of the game with temperatures hovering in the 60s. Rain expands and increases in intensity overnight Sunday night and continues through Monday with areas of fog and downpours at times. 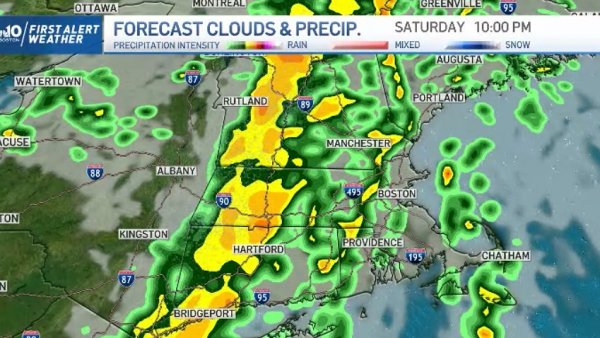 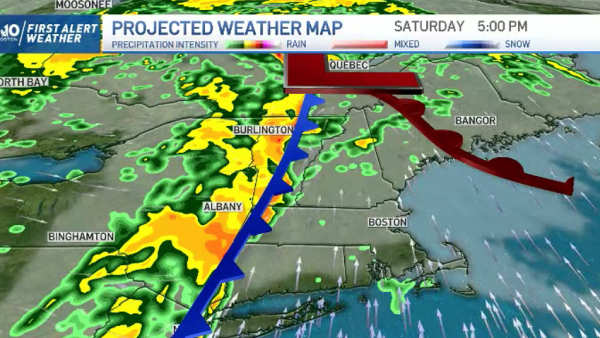 Our weather team has issued a first alert for Monday owing to the impact of rain on both the morning and evening commute with 1 to 2 inches of total rainfall expected. These rainfall amounts are unlikely to cause widespread flooding but certainly may cause ponding of water on roadways, hydroplaning concerns on highways and perhaps some urban street flooding during the heavier downpours along with fog at times, particularly stubborn in our hilly terrain.

Showers look like they will be stubborn on Tuesday with cool air on a northeast wind holding temperatures in the 50s for many but Wednesday begins improvement that should carry us through the end of the week and even if there is a chance of scattered showers returning at times in the exclusive First Alert 10-day forecast, we are still looking at daytime high temperatures of 65 to 70° which is warmer than normal for this time of the year.