CDC Director Dr. Rochelle Walensky was visiting the state one day after warning of a possible fourth coronavirus surge

Dr. Rochelle Walensky, the head of the Centers for Disease Control and Prevention, on Tuesday implored people in Massachusetts and beyond to wear masks and practice social distancing to prevent a possible new wave of the coronavirus pandemic.

During a tour of the FEMA mass vaccination site at the Hynes Convention Center in Boston, Walensky doubled down on her remarks a day earlier that she felt "impending doom" over a possible fourth surge in coronavirus cases as health experts deem Massachusetts among the "areas of greatest concern."

"We are just asking you to hang on just a little bit longer," she said. "Wear your masks, continue to distance, and do the things that keep you safe so that we don't have to see sickness, or hospitalization with COVID-19 in anyone who was supposed to get their vaccine the following week."

Walensky said the country is currently seeing cases rise by some 61,000 each day, a 13% increase from last week at the same time.

Asked if Massachusetts should be doing anything differently, Walensky said she wouldn't comment on individual states but was pleased to see everyone at Hynes wearing a mask.

She said she believes that all states should have a mask order in place, and in those that do not, people should still wear masks. Massachusetts' mask order remains in effect.

Walensky, formerly an infectious diseases expert at Massachusetts General Hospital, said data shows that two doses of the Pfizer and Moderna vaccines, and a single dose of the Johnson & Johnson vaccine, are effective against variants of the virus now circulating.

But she said the arrival of more variants increase the risk of new mutations forming that could reduce the overall effectiveness of the vaccines.

On Monday, Walensky sounded the alarm over a possible fourth surge in coronavirus cases as health experts deem Massachusetts among the "areas of greatest concern."

Acknowledging that COVID-19 infections are again on the rise in Massachusetts, Gov. Charlie Baker on Tuesday warned against letting a "false sense of security" settle in as vaccine distribution ramps up and federal officials caution states not to relax pandemic restrictions.

"COVID is still a highly contagious virus with all sorts of new variants," Baker said.

Walensky toured the vaccination site alongside Baker and other officials.

Recently chosen by the Federal Emergency Management Agency as a pilot vaccination site, the capacity to administer shots at the Hynes will increase beginning Wednesday from 1,000 to 7,000 shots a day with an additional 42,000 doses per week coming to the site from the federal government.

FEMA Director Robert Fenton said the plan is to support Hynes over the next eights with six weeks of Pfizer doses followed by two weeks of Johnson & Johnson vaccine.

"We'll take every dose we can get," Baker said.

With Walensky looking on, Baker said no one in Massachusetts can afford to let their guard down now.

Head of the CDC Dr. Rochelle Walensky is sounding the alarm over a possible fourth surge in COVID-19 cases as health experts label Massachusetts among the "areas of greatest concern."

He noted that the state continues to have a public mask mandate, and gathering limits at private residences have remained unchanged in recent weeks at 10 people indoors and 25 outdoors.

"Massachusetts has some of the strictest COVID-19 protocols in place and they're there for a reason. We need everyone to follow them and embrace them," Baker said.

U.S. Rep. Stephen Lynch, who joined the tour along with Sen. Ed Markey and other officials, also urged hospitals, schools and other organizations receiving aid through the American Rescue Plan for the purchase of personal protective equipment to buy from vendors in the United States, not China.

Tuesday's report from the Massachusetts Department of Public Health showed the seven day positivity rate in the state is at 2.55%, a figure that had been as low as 2% as recently as March 16.

The seven-day rolling average for daily new cases in the U.S. increased over the past two weeks from 53,670 on March 14 to 63,239 on Sunday, according to Johns Hopkins University.

Walensky warned states on March 1 against "rolling back" public health precautions too quickly, and since then she has noted that infection numbers nationally are again on the rise. 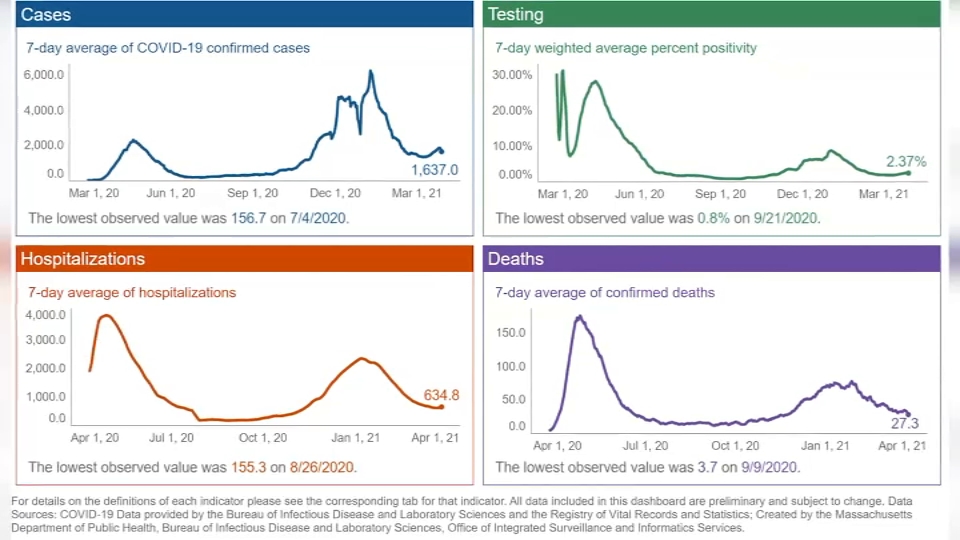 As COVID Cases Rise Across US, There's Concern in Mass.