Another convincing factor for Hamilton's return was James Cameron, who directed the first two films and would serve as a producer on "Dark Fate,"

For the new "Terminator" film, it was seemingly easy to bring back Arnold Schwarzenegger as the human-looking cyborg assassin because of his devotion to the franchise. But having Linda Hamilton return as Sarah Connor was a tougher decision considering she'd already turned down a chance to reprise her iconic role.

It took Hamilton six weeks to decide whether she wanted to portray Connor, the waitress-turned-warrior who along with Schwarzenegger made the first two "Terminator" movies among the best action films ever made.

Her hesitation stemmed from the fear that a return as Connor in "Terminator: Dark Fate" might not live up to the hype of the earlier films. 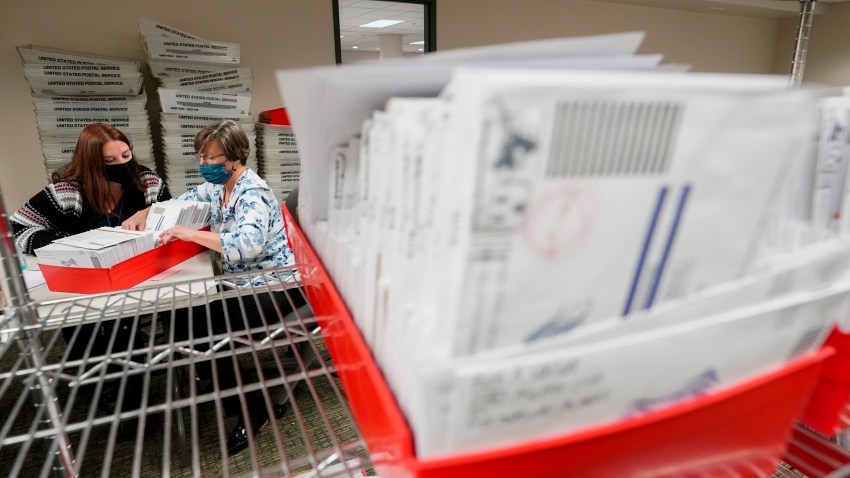 "I was terrified," she recalled. "I really didn't want to disappoint Sarah Connor. That's where I go when I'm terrified. You usually regret what you didn't do. So I thought, 'If I'm this terrified, then maybe that's the reason to do it.'"

Another convincing factor for Hamilton's return was James Cameron, who directed the first two films and would serve as a producer on "Dark Fate," which arrives in theaters Friday. She passed on the opportunity to appear in 2003's "Terminator 3: Rise of the Machines" believing she had "completed the character's story" and because of Cameron's absence, calling him the "magic ingredient."

Hamilton was concerned with "Dark Fate" messing with the legacy of the uber-popular "Terminator 2: Judgment Day." But she said Cameron's emails from three years ago detailing the pros and cons of her playing Connor and his enthusiasm about the project helped put her at ease.

The new film ignores three of the franchise's previous movies including 2015's "Terminator: Genisys," which fizzled with domestic audiences but had a strong turnout overseas. "Dark Fate" picks up soon after the events of "T2."

This time, Connor and an augmented soldier named Grace, played by Mackenzie Davis, must protect a young Mexican girl Dani (Natalia Reyes) who is being hunted by a newly modified liquid Terminator from the future.

Hamilton says Connor still has a vengeful heart against Terminators, yet grudgingly reunites with Schwarzenegger, a time-traveling killing-machine who's developed a conscience. Connor's character is also not a fan of humans because "humankind builds machines that create their own death," the actress said.

"Sarah has nothing else left, but vengeance," Hamilton said. "She's a woman without a country. She has no mission, no son; broken, dark, black heart."

Schwarzenegger said the 63-year-old Hamilton brought some "freshness" back into the franchise.

"I thought that she set the bar really high again, just like she did in 1991," Schwarzenegger said of Hamilton, who trained for a year to get in fighting shape. "Especially as a woman in her 60s now. There's no action lady out there that I know of who's in her 60s doing what she does. Only Cameron really has the (courage) to do something like that. But he always feels quite comfortable with those kinds of ideas, especially women action heroes."

Hamilton praised Schwarzenegger for his work as well as her female co-stars, Davis and Reyes. But sometimes, she said it was a struggle to find the voice of their female characters with an all-male screenwriter team.

Hamilton said initially the writers had a hard time writing "organic" dialogue between her and Davis' character. She called the process a fail at first and sometimes declined to recite certain lines, until everyone got on the same page.

The results have been met with mixed reviews, with some criticizing the dialogue between female characters.

"They really had trouble getting the script together," she said. "There were so many writers. They were four months late delivering it to me, because they didn't want me to read the first pass. In the end, I think they really did a bang up job. But it was really changing throughout, even as we were shooting. That was wacky to me, because I never really had to work that way and try to fill in the blanks when you don't quite know where you've been or where you're going or when you're going to learn that. Acting is a linear job. You want to know precisely where I just come from, where I'm going and I fill in those moments with as much authenticity as I can. There were some issues with the script, but ultimately I think we got it worked out."

Hamilton believes her input helped serve the film, her character and others well.

"In the end, I know her best," she said. "That is the advantage of having played someone over a 35-year period. Otherwise, in all my other work, I would let the greater minds have their way. But not this time."