The victory by the state’s first Black senator ensures Democrats an outright majority in the chamber, and the party will no longer have to negotiate a power-sharing deal with Republicans

Democratic Sen. Raphael Warnock defeated Republican challenger Herschel Walker in a Georgia runoff election, NBC News projects, ensuring Democrats an outright majority in the Senate for the rest of President Joe Biden’s current term and capping an underwhelming midterm cycle for the GOP in the last major vote of the year.

With Warnock’s second runoff victory in as many years, Democrats will have a 51-49 Senate majority, gaining a seat from the current 50-50 split with John Fetterman’s victory in Pennsylvania. There will be divided government, however, with Republicans having narrowly flipped House control.

“After a hard-fought campaign — or, should I say, campaigns — it is my honor to utter the four most powerful words ever spoken in a democracy: The people have spoken,” Warnock, 53, told jubilant supporters who packed a downtown Atlanta hotel ballroom.

“I often say that a vote is a kind of prayer for the world we desire for ourselves and for our children,” declared Warnock, a Baptist pastor and his state's first Black senator. “Georgia, you have been praying with your lips and your legs, your hands and your feet, your heads and your hearts. You have put in the hard work, and here we are standing together.”

In last month’s election, Warnock led Walker by 37,000 votes out of almost 4 million cast, but fell short of the 50% threshold needed to avoid a runoff. The senator appeared to be headed for a wider final margin in Tuesday's runoff, with Walker, a football legend at the University of Georgia and in the NFL, unable to overcome a bevy of damaging allegations, including claims that he paid for two former girlfriends’ abortions despite supporting a national ban on the procedure.

“The numbers look like they’re not going to add up,” Walker, an ally and friend of former President Donald Trump, told supporters late Tuesday at the College Football Hall of Fame in downtown Atlanta. “There’s no excuses in life, and I’m not going to make any excuses now because we put up one heck of a fight.”

Walker's defeat bookends the GOP’s struggles this year to win with flawed candidates cast from Trump’s mold, a blow to the former president as he builds his third White House bid ahead of 2024.

Democrats’ new outright majority in the Senate means the party will no longer have to negotiate a power-sharing deal with Republicans and won’t have to rely on Vice President Kamala Harris to break as many tie votes.

National Democrats celebrated Tuesday, with Biden tweeting a photo of his congratulatory phone call to the senator. “Georgia voters stood up for our democracy, rejected Ultra MAGAism, and ... sent a good man back to the Senate,” Biden tweeted, referencing Trump's “Make America Great Again” slogan.

About 1.9 million runoff votes were cast in Georgia by mail and during early voting. A robust Election Day turnout added about 1.4 million more, slightly more than the Election Day totals in November and in 2020.

Total turnout still trailed the 2021 runoff turnout of about 4.5 million. Voting rights groups pointed to changes made by state lawmakers after the 2020 election that shortened the period for runoffs, from nine weeks to four, as a reason for the decline in early and mail voting.

Warnock emphasized his willingness to work across the aisle and his personal values, buoyed by his status as senior pastor of Atlanta’s Ebenezer Baptist Church, where civil rights icon Martin Luther King Jr. once preached.

Walker benefited during the campaign from nearly unmatched name recognition from his football career, yet was dogged by questions about his fitness for office.

A multimillionaire businessman, Walker faced questions about his past, including his exaggerations of his business achievements, academic credentials and philanthropic activities. 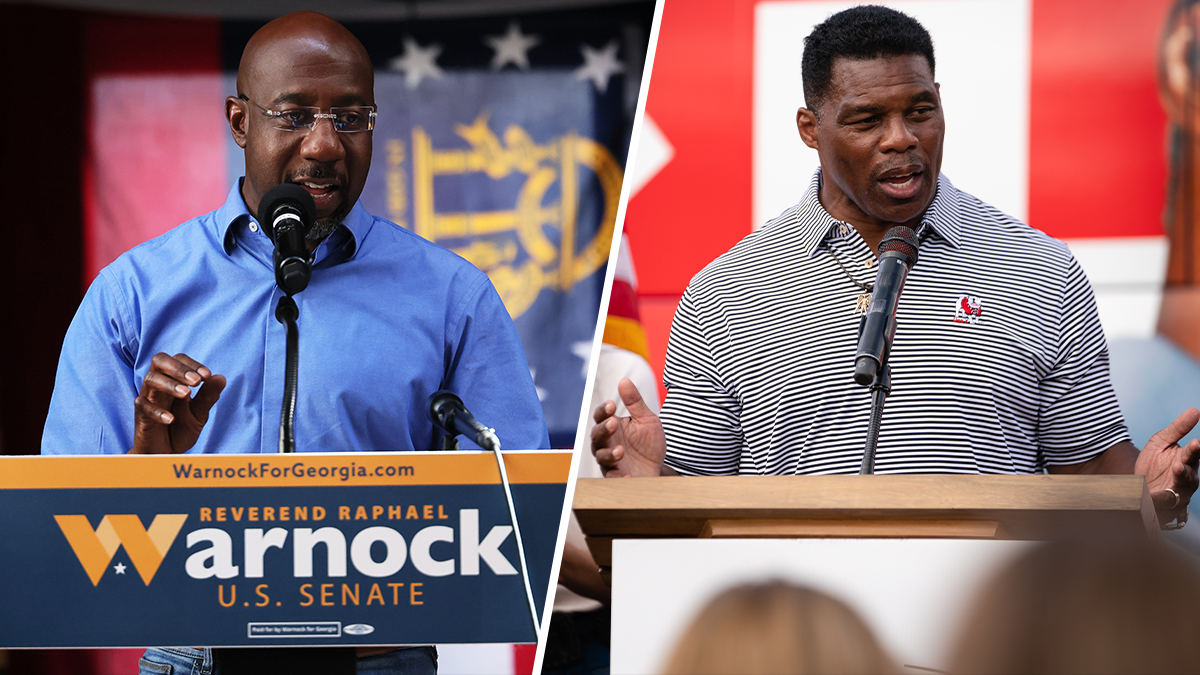 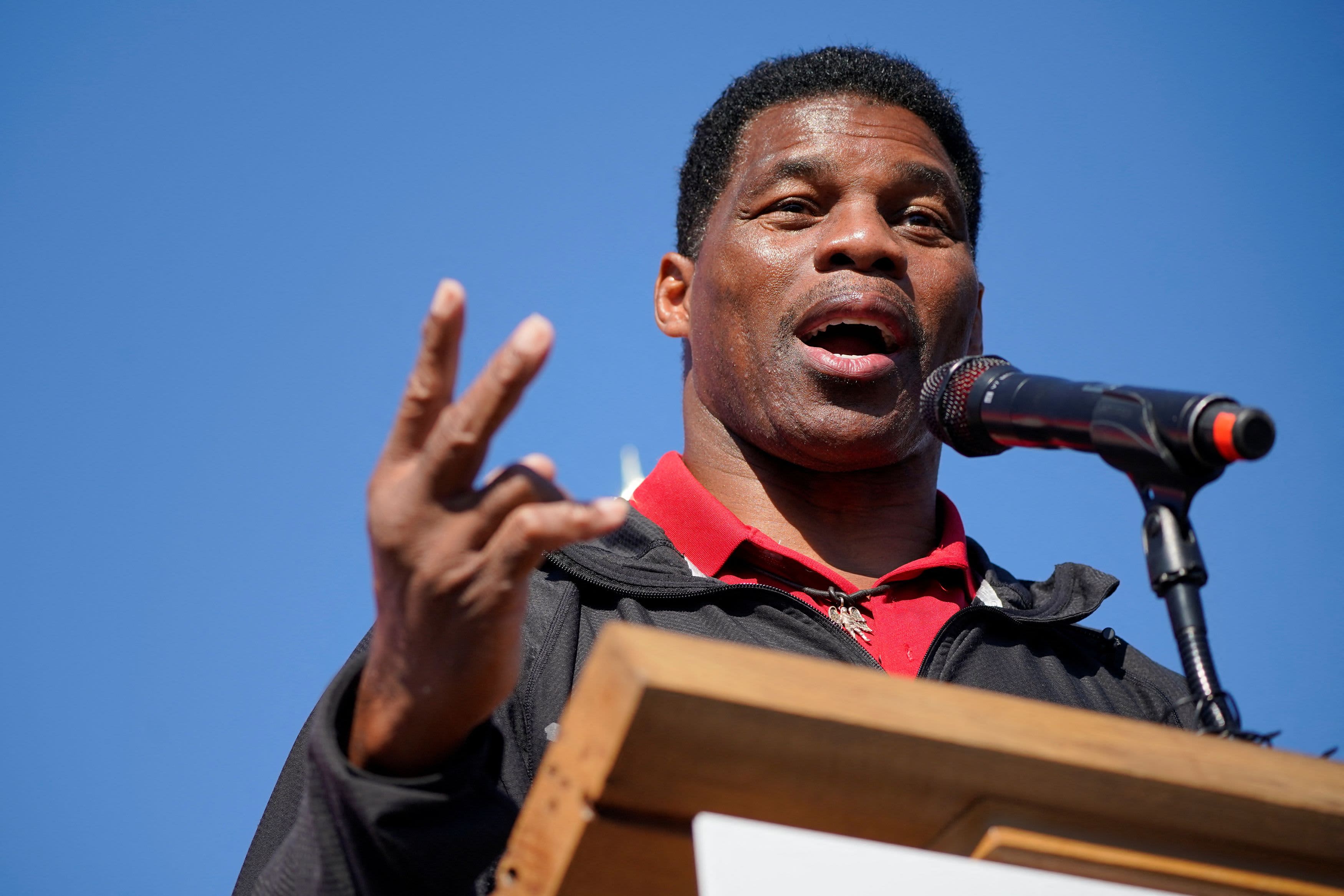 In his personal life, Walker faced new attention on his ex-wife’s previous accounts of domestic violence, including details that he once held a gun to her head and threatened to kill her. He has never denied those specifics and wrote of his violent tendencies in a 2008 memoir that attributed the behavior to mental illness.

As a candidate, he sometimes mangled policy discussions, attributing the climate crisis to China’s “bad air” overtaking “good air” from the United States and arguing that diabetics could manage their health by “eating right,” a practice that isn’t enough for insulin-dependent diabetic patients.

On Tuesday, Atlanta voter Tom Callaway praised the Republican Party’s strength in Georgia and said he’d supported Kemp in the opening round of voting. But he said he cast his ballot for Warnock because he didn’t think “Herschel Walker has the credentials to be a senator.”

“I didn’t believe he had a statement of what he really believed in or had a campaign that made sense,” Callaway said.

Walker, meanwhile, sought to portray Warnock as a yes-man for Biden. He sometimes made the attack in especially personal terms, accusing Warnock of “being on his knees, begging” at the White House — a searing charge for a Black challenger to level against a Black senator about his relationship with a white president.

Warnock promoted his Senate accomplishments, touting a provision he sponsored to cap insulin costs for Medicare patients. He hailed deals on infrastructure and maternal health care forged with Republican senators, mentioning those GOP colleagues more than he did Biden or other Washington Democrats.

Warnock distanced himself from Biden, whose approval ratings have lagged as inflation remains high. After the general election, Biden promised to help Warnock in any way he could, even if it meant staying away from Georgia. Bypassing the president, Warnock decided instead to campaign with former President Barack Obama in the days before the runoff election.

Walker, meanwhile, avoided campaigning with Trump until the campaign’s final day, when the pair conducted a conference call Monday with supporters.

Walker joins failed Senate nominees Dr. Mehmet Oz of Pennsylvania, Blake Masters of Arizona, Adam Laxalt of Nevada and Don Bolduc of New Hampshire as Trump loyalists who ultimately lost races that Republicans once thought they would — or at least could — win.

Associated Press writers Christina A. Cassidy and Ron Harris contributed to this report.