Election Day 2021: These Are the Races to Watch Across the US Tuesday

It may be an odd-numbered year but Tuesday's elections aren't sleepy, local contests. Voters in Virginia are weighing in on a governor's race that could rattle President Joe Biden and Democrats in Washington. In Minneapolis, a city still shaken by George Floyd's murder will vote on whether to disband its police department and create a new public safety agency. School board races across the country have become the new battlegrounds for partisan debates over race.

What to watch as returns come in Tuesday:

Virginia was an early hub of the Democratic resistance to President Donald Trump. Today, it may be the center of Democratic fatigue. Polls have shown that Republicans in Virginia have a sizable enthusiasm advantage over Democrats, jeopardizing Democrats' chances of holding onto the governor's office in a state Biden won by 10 percentage points last year.

Former Gov. Terry McAuliffe has been trying to fire up his voters by casting Republican newcomer Glenn Youngkin as a “Trump wannabe.” But it's not clear the label is sticking. Youngkin has avoided being seen with Trump — or any national GOP leaders — and has kept his focus on education, spending and other state issues.

McAuliffe's campaign notes he's running in a tough environment for any Democrat. Biden's approval number have slouched amid a stalemate over his economic agenda in Congress, his pullout from Afghanistan, rising inflation and the persistence of the coronavirus.

Democrats' best bet may be that the unexpectedly tight race — along with the threats to abortion rights and continued messaging on Trump — jolts their base and pushes them to the polls. Even a narrow win for Democrats in a state they won by double digits last year will be little comfort as the party tries to hold onto its incredibly tight congressional majorities in next year's midterms. Just a five-seat swing in the House or a single one in the Senate could flip a chamber.

CAN REPUBLICANS RECLAIM SUBURBAN VOTERS TURNED OFF BY TRUMP? YOUNGKIN A KEY TEST FOR GOP

Youngkin, in his first bid for public office, is showing Republicans a potential way forward in the post-Trump era. He positioned himself as a nonthreatening suburban dad in a fleece vest, but steadfastly refused to denounce the former president, who remains popular among Republicans.

Youngkin has stayed on message even as McAuliffe hammered him for being a stalking horse for Trump. Rather than engaging, Youngkin has gone after McAuliffe on taxes and especially education.

It's those education attacks that offer the most encouraging path for Republicans. Seizing on widespread discontent with schools during the pandemic and heated debates about race, Youngkin has criticized schools over hot-button conservative issues like critical race theory. He even waded into a murky sexual assault allegation and resurrected a debate about banning books. That's enabled him to appeal both to suburban voters resentful of their local school districts and to hard-line Trump voters who see the education debate as central to their political identity. 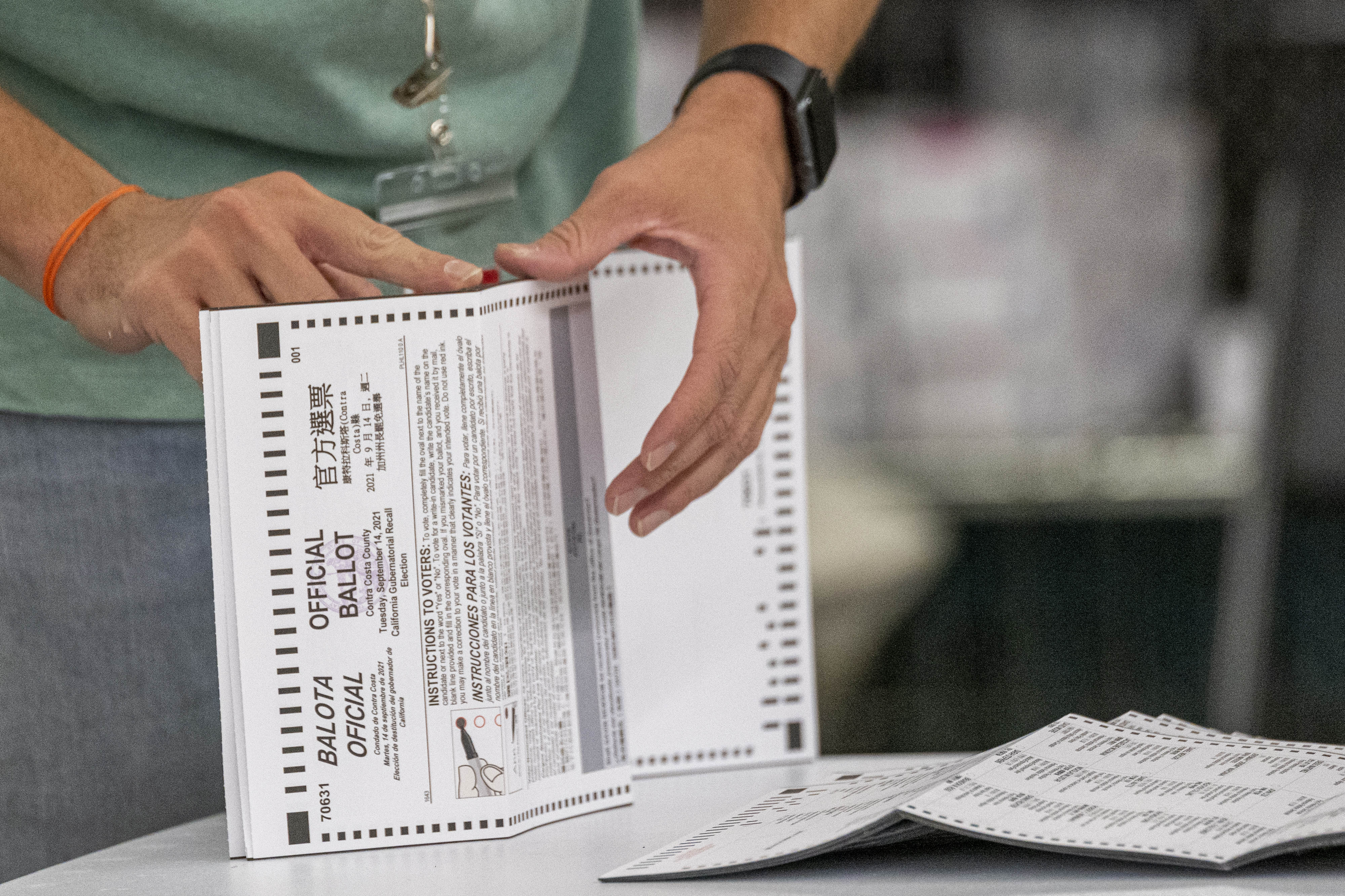 Few Snags for Election Day Voting Amid Scrutiny on Process 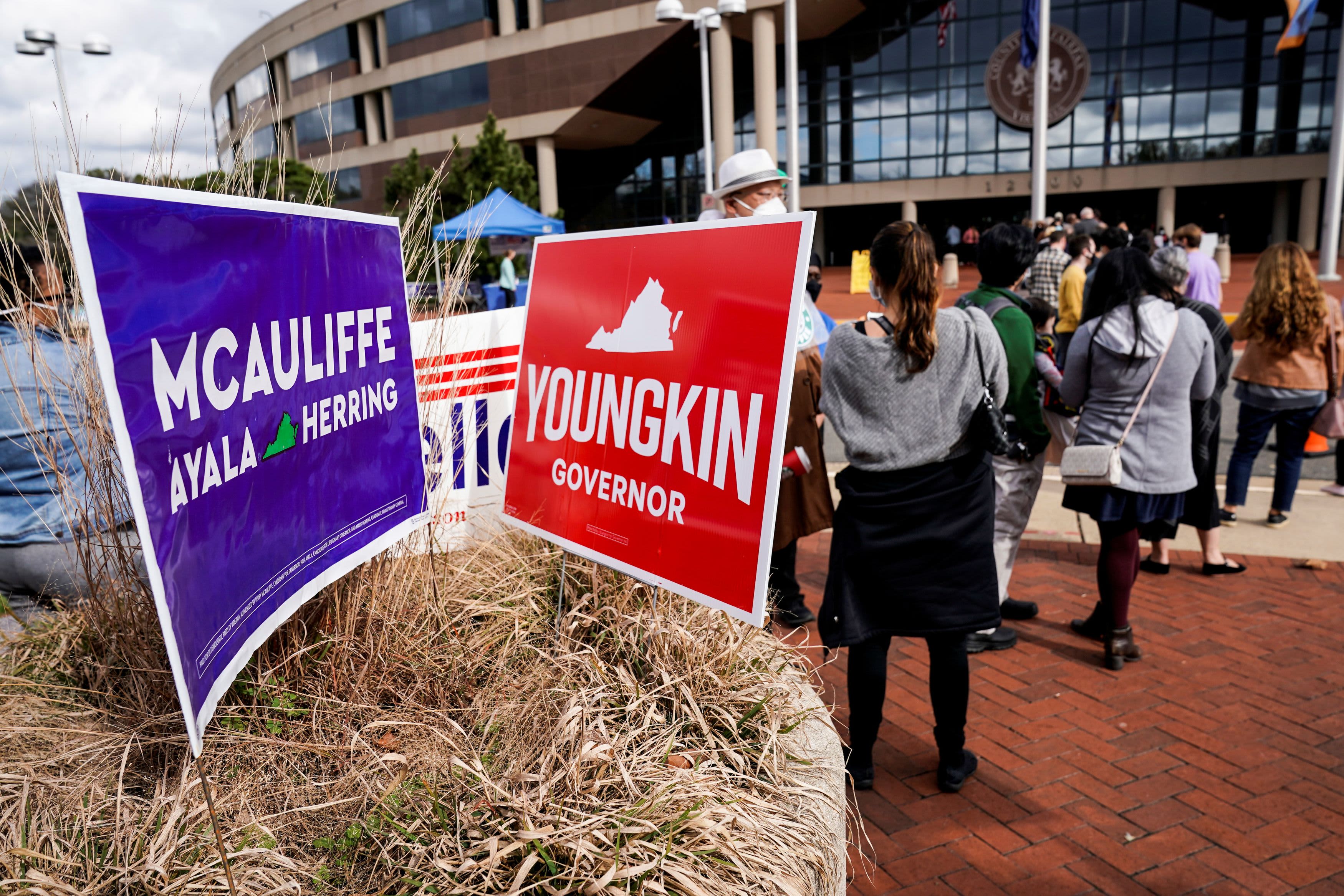 The best sign that Youngkin's gambit works will be how he performs in the affluent northern Virginia suburbs of Washington, D.C., once a bastion of the Republican Party but now a key part of the Democratic coalition.

If Youngkin makes inroads in northern Virginia and in the Richmond suburbs, it's a sign he was able to successfully walk the line. Likewise, if Democrats hold the margins from their successful 2017 gubernatorial race there, it'd be a sign of continued trouble for Republicans in highly educated suburbs.

WHEN WILL WE KNOW THE WINNER?

Be wary of early returns in Virginia because they might not resemble the final results.

In 2020, Trump jumped out to a huge early lead over Biden that lasted until early Wednesday, when heavily Democratic counties in northern Virginia finished counting their mail ballots. Once the Democratic counties reported, the race flipped in Biden’s favor and he ultimately won by a comfortable margin.

The late swing in favor of Biden was especially big because most counties, including Fairfax, the state’s largest, released the results of their mail ballots at the end of the night, and Virginia’s mail ballots heavily favored Democrats.

This year, a new state law requires counties to start processing mail ballots at least seven days before Election Day so they can be counted and released on election night soon after the polls close at 7 p.m. EDT. Counties are expected to release the results of their mail ballots first, followed by early in-person votes and, finally, votes cast at local polling places on Election Day. Fairfax County officials have said they plan to follow this procedure.

If Virginia’s mail ballots continue to favor Democrats and the Election Day votes favor Republicans, the vote count could swing back and forth, depending on which type of votes are being released.

Mail ballots can arrive as late as Friday and still be counted, as long as they are postmarked by Election Day. Historically, less than 2% of Virginia’s votes are counted after Election Day.

NJ TO DECIDE ON 2ND TERM FOR MURHY OR CHANGING DIRECTIONS

The tumult of the Virginia governor's race has overshadowed the only other race for governor Tuesday. In New Jersey, Democratic Gov. Phil Murphy is trying to fight off a challenge from Republican Jack Ciattarelli, a former state legislator.

New Jersey is something of a test case for Democrats' theory of how they can win in 2022 and beyond. Murphy fulfilled his campaign promises and was able to implement vastly expanded government funding for widespread prekindergarten and free community college — policies that Biden is struggling to get through the Democrats' razor-thin majorities in Congress. Murphy has embraced the left wing of the party and hosted Vermont independent Sen. Bernie Sanders for a campaign rally last month.

While Ciattarelli has also tried to walk the line between energizing Trump voters and appealing to suburbanites, he faces a more daunting task than Youngkin. New Jersey is a more Democratic state than Virginia — Murphy won his first election by 14 percentage points in 2018. He also has the power of incumbency on his side, unlike in Virginia, the only state in the nation that doesn't allow governors consecutive terms.

The few public polls in the race have shown Murphy with a steady lead. If he wins easily, it may be a sign of hope for Democrats that they can survive 2022 if they deliver on Biden's plans for a massive expansion of social safety net and climate change programs. If it's closer, that'd be another promising indication for GOP hopes in the midterms.

WILL MINNEAPOLIS VOTERS DECIDE TO REPLACE THE POLICE?

Democrats may firmly control the nation's city halls, but that doesn't mean there's nothing to fight about. Tuesday features a wide array of local and mayoral races that will be the latest installments in the long-running battle between liberals and relative moderates.

The most prominent may be in Minneapolis, where voters will decide whether to disband their police department after the death of George Floyd and replace it with a “Department of Public Safety.” The city's mayor, Jacob Frey, a Democrat, opposes the measure and is himself up for reelection against two liberals who contend he hasn't been aggressive enough on reforming the city's police.

LIBERAL DEMOCRATS FACE OFF AGAINST MODERATES IN BOSTON AND BUFFALO

In Boston, Michelle Wu, the 36-year-old daughter of Taiwanese immigrants and a protégé of Massachusetts Sen. Elizabeth Warren, is running against Annissa Essaibi George, the daughter of Tunisian and Polish immigrants who has received support from the city's traditional powerbrokers.

In Buffalo, New York, India Walton, a self-described Democratic socialist who won an upset victory in the Democratic primary there in June, will again have to defeat the city's mayor, Byron Brown, who is staging a write-in campaign after losing the primary.

The races may provide a yardstick on whether the liberal wing of the Democratic Party can still dominate in the country's bluest areas. But some mayoral races won't fall into neat ideological categories, such as in Atlanta, where a sprawling field has become a test of whether former Mayor Kasim Reed's ethics turmoil when he was in power should bar him for winning office again.

Adams, who would be the city’s second Black mayor, ran as a moderate in a crowded primary field. He spent 22 years in the police department before winning a seat in the state senate.

Sliwa, founder of 1970s-era Guardian Angel anti-crime patrol, has called for hiring 3,000 more police officers and has tried to portray Adams as an out-of-touch elitist.

Elections are being held for three open congressional seats in Ohio and Florida.

In Florida, 11 Democrats are running in Tuesday’s primary special election to replace Democratic Rep. Alcee Hastings, who died in April.

Big players have gotten involved, including some big GOP donors, prominent Republican officeholders and former Vice President Mike Pence, who urged attendees of an Ohio rally last weekend to vote for conservative school board candidates. Republican Iowa Gov. Kim Reynolds is backing an anti-masking candidate running for the board in suburban Des Moines. Dozens of other races, from suburban Denver to suburban Philadelphia, have also become heated.

School board races are small and often not representative of larger trends, but conservatives are hoping to change that Tuesday.