Rask's absence was announced Saturday morning and it did not seem to rattle the defending Eastern Conference champions later in the day.

The Boston Bruins, shortly after waking up Saturday to face the Carolina Hurricanes, found out goaltender Tuukka Rask was opting out of the NHL playoffs to be with his family.

While the defending Eastern Conference champions are supporting their teammate at least publicly, they're focusing on their quest to go a step farther in the playoffs than they did a year ago with Rask in net.

Jaroslav Halak stopped 29 shots after starting on short notice in place of Rask and Charlie Coyle provided plenty of offense, scoring once and setting up another goal to help Boston beat Carolina 3-1 to take a 2-1 lead in their first-round series.

"We move on," Bruins coach Bruce Cassidy said. "I know it sounds cold, but on the professional part of it we have a job to do here."

Rask, a Vezina Trophy finalist, is the highest-profile player to opt out of the NHL's return from the coronavirus pandemic shutdown. He led the league with a 2.12 goals-against average and helped Boston reach Game 7 of the Stanley Cup Final last year.

Rask left the league's bubble in Toronto to be with his wife and three young children, including a newborn.

"We found out shortly before departure of the bus," Boston defenseman Zdeno Chara recalled. "Obviously, our first concern is the health and safety of his family."

Game 4 is Monday night, when fifth-seeded Carolina may be without Andrei Svechnikov against fourth-seeded Boston. The 20-year-old Russian standout forward was injured late in the game when his right leg, near his ankle, buckled after getting tied up with Chara in front of the net.

On Saturday afternoon, Boston was without star David Pastrnak for a second straight game due to an undisclosed ailment. He watched from the stands Saturday, sitting alone with a mask.

Coyle did his part to make up for the loss. He broke a scoreless tie, scoring on a power play off a rebound in the opening seconds of the second period. Coyle batted the puck out of the air and past Petr Mrazek after the goaltender stopped Brad Marchand's shot that was set up by David Krejci's pass off the end boards.

"We need Charlie Coyle to be an effective player for us, an impact player," Cassidy said.

Boston Bruins in the Playoffs 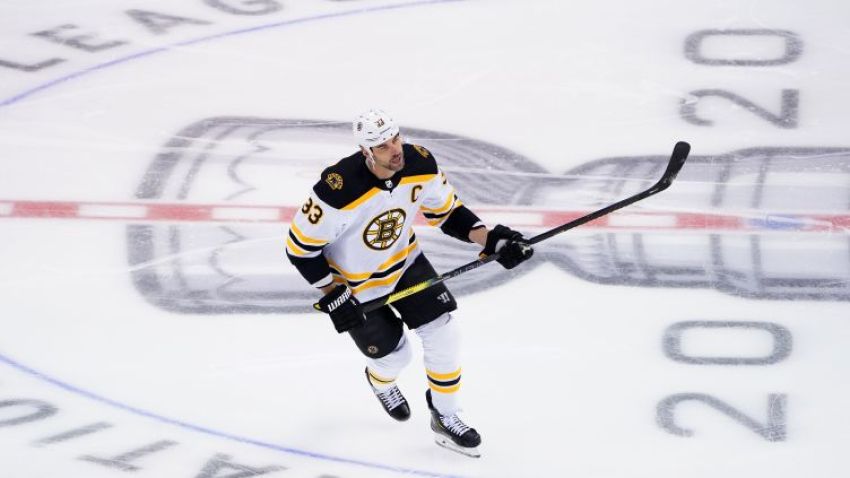 The 35-year-old Halak made his first start in the playoffs since 2015 with the New York Islanders. He came out of net midway through the second period to prevent Justin Williams from getting a shot off to potentially tie the game.

"They played better, but we were still there," Williams said. "We got a lot more to give. We plan on being here for a long time so we've got to show up.''

The Hurricanes had an opportunity to tie it late in the second period or early in the third on a power play, but Boston took advantage. Coyle made a centering pass to set up Sean Kuraly for a score 1:16 into the third to give Boston a two-goal cushion.

Nino Niederreiter scored later in the third to pull the Hurricanes within a goal. Marchand ended Carolina's comeback chances by tapping the puck into an empty net with 30.9 seconds left to restore Boston's two-goal lead and lead in the series after winning Game 1 in double overtime.

"They pushed back and that's what they do,'' Williams said. "They're a championship hockey team."

NOTES: Boston's backup options in goal are Maxime Lagace, who has 17 games of NHL experience, and Dan Vladar, who has not played an NHL game. "There will be a little bit of competition in there," Cassidy said. ... Mrazek started in place of James Reimer, who helped Carolina win Game 2.