Red Sox Trade Mookie Betts and David Price to Dodgers, According to Reports

Mookie Betts, one of the best players in Major League Baseball, has played his last game with the Red Sox.

According to Ken Rosenthal of the Athletic, the Dodgers will send young outfielder Alex Verdugo, a fixture on top prospect lists put out the last three offseasons, to Boston as part of the deal. Pitcher Kenta Maeda will go from Los Angeles to the Minnesota Twins, who will send a notable pitching prospect in Brusdar Graterol to the Red Sox.

Multiple baseball insiders reported that the Sox would send "significant" cash to the Dodgers to offset some of the $96 million still owed to Price over the next three years.

Rosenthal added that fellow Dodgers outfielder Joc Pederson would take the short trip to Anaheim to play for the Los Angeles Angels if the deal is completed, but ESPN's Jeff Passan later confirmed that would be a separate deal for Angels outfielder Luis Rengifo.

The three-team blockbuster is still pending medical reviews, and the amount of money the Red Sox will send the Dodgers was not immediately known.

In the time since former General Manager Theo Epstein made him a fifth-round draft pick in 2011, Betts has developed into one of baseball's biggest stars.

Nicholas Sapienza was diagnosed with a physically debilitating disease. Through the Make-A-Wish Foundation, he was able to meet Mookie Betts.

He has made the last four All-Star games and was named American League MVP in 2018, when he led the majors with a .346 batting average, swatted 32 homers, stole 30 bases and accrued a 1.078 OPS. His Wins Above Replacement, or WAR, was the best in baseball that year at 10.9, as calculated by Baseball Reference.

But as his talent developed, so too did his earning potential. Betts has repeatedly stated his intent to hit the open market when he becomes a free agent after the 2020 season. In his final year of club control, Betts will make $27 million, after signing a record-breaking deal to avoid arbitration.

According to Lou Merloni, there was a wide chasm in past extension talks between the Red Sox and Betts. He said last week on WEEI that Boston had offered Betts a 10-year, $300 million deal after the 2018 season, which Betts countered with a request for 12 years and $420 million — just $10 million less than Trout's record extension, signed the same offseason.

If that divide weren't already irreconcilable, matters were only further complicated by the chaotic position the team has found itself in. After winning the most games in team history on their way to a World Series title in 2018, the 2019 squad finished with a pedestrian 84-78 record and missed the postseason. The team fired Dave Dombrowski as president of baseball operations and made public statements showing intent to shed salary and get under the MLB's luxury tax. 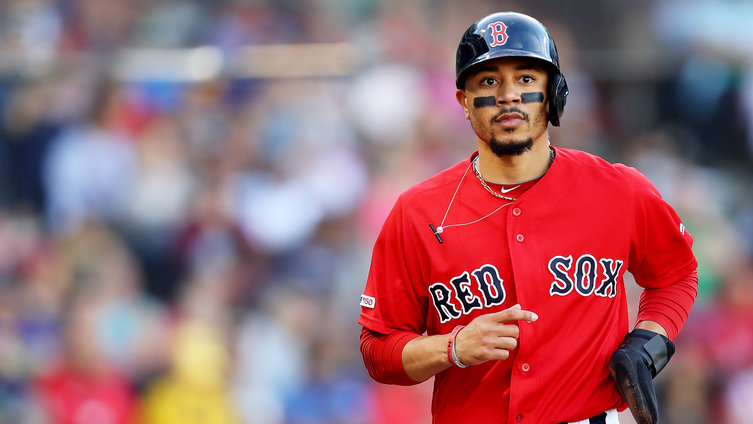 Months later, following revelations that he helped the Houston Astros cheat in 2017 and may have done the same in Boston in 2018, the Red Sox fired manager Alex Cora, who has yet to be replaced as spring training approaches.

Given the ample uncertainty in 2020 and beyond, many have argued the team would be better served by lowering its payroll and/or adding prospects, and by trading Betts rather than risking him walking as a free agent.

Barring an extension with the Dodgers, the Sox will have the opportunity to reunite with their homegrown star next offseason — if they are willing to pay him an enormous sum of money while competing with 29 other potential suitors.

Price was an established star and Cy Young Award winner when he landed in Boston on a seven-year, $217 million free agent contract after the 2015 season — a record for a pitcher until the Yankees committed $324 million to Gerrit Cole in December.

Price's time in Boston was a roller coaster, with detractors pointing to a pedestrian first season and a history of being less effective in the postseason. He silenced critics on the latter with absolute dominance in the 2018 World Series, when he started three games against the Dodgers and Cora used him twice out of the bullpen, going 2-0 with a 1.98 ERA against his new team. He was extremely effective against the Astros in the ALCS, as well.

When Price and ace Chris Sale are healthy and effective, they make the Red Sox' rotation formidable. But as the team professed its desire for salary relief, Price — who chose not to opt out of his final four years after winning the World Series — became an obvious trade candidate. He is owed $32 million in each of the next three seasons.