Climate change has altered the approach to winter seasonal forecasting

This winter, we're expecting a body of frigid air to affect the weather in New England. But to understand whether it's going to make it very cold here, or bring lots of snow, you need to understand some climate science.

And the thing is, climate change is making it harder and harder to do that. Here's how we approached this year's seasonal forecast:

How the polar vortex works

In our climate change special, "Climate 2022," which tops this article, one of our segments featured an interview with Dr. David Coe, whose doctoral research at the University of Massachusetts, Lowell focused on how climate change has altered the winter season in New England and throughout the Northern Hemisphere.

The first key concept to explaining the change in the winter season is starting with the polar vortex.

Yes, in 2014 the polar vortex nearly became a joke term in mainstream media – reporters standing outside, smacking pieces of frozen pizza, eggs, steak or frozen T-shirts against flagpoles, the ground or themselves. But the scientific reality of what was occurring then, and what happens regularly to the polar vortex in the modern winter, is anything but funny.

The polar vortex isn’t new – it’s a recurring feature in the atmosphere, present to some extent throughout the year but most prevalent in winter as a counter-clockwise-swirling mass of cold air and atmospheric energy aloft that usually sits somewhere close to the North Pole. Each winter for generations, when the vortex wobbles south or sends a piece of its cold energy southward, a shot of substantial cold air would follow suit — that's been common knowledge among meteorologists.

Still, the bulk of the cold air would remain close to the polar vortex, with temperatures 10 and 20 degrees below zero and colder in the Arctic and Northern Alaska.

But in recent years – 2014 certainly the first, most visible example – the polar vortex has been under attack by warmth on all sides.

What happens when warmth invades the Arctic isn’t just a melting of glacial icecaps. The polar vortex, in response to warming temperatures through a deep layer of the atmosphere, breaks into pieces, unable to hold together a pool of consistent cold. As the vortex breaks into pieces, each of those smaller pools of cold air becomes unstable, wobbling and dipping south – farther south than an intact and whole polar vortex normally would.

These fractured pools of intense cold deliver subzero temperatures to areas farther south than normal, prompting some to question how much global warming is really taking place. What they may not realize is that warmth is rushing into the Arctic to take the place of the disjointed and fractured polar vortex. Farther south, those not impacted by the migratory, frigid Arctic pools of air experience warmer-than-normal weather in response to the warming climate all around those exceptional pools.

This fracturing of the polar vortex has an impact not only on temperature, but also on snow. The explanation here is one of the most basic elementary school concepts, that clouds and precipitation form when cold and warm air collide with moisture.

Consider this: if the base state, meaning most of the air and water, is warming, this means both warmer temperatures and more moisture in the air. Now, we introduce a southward migrating pool of intensely and abnormally cold air – a piece of the polar vortex – into the generally warm air. The result is an exceptional clash of warm and cold, meaning the potential for an exceptional zone of snow.

As storms develop on the periphery of the displaced Arctic cold and atmospheric energy, those storms are fueled by the temperature difference of warm to cold, and tend to develop along the same storm path, again and again, where the cold and warm collide. This means snow falls on the same area repeatedly, much like we saw in the Boston area in February and March of 2015, when we broke our seasonal snowfall record in a matter of weeks.

Again, some who are directly under the pummeling snow zone may question whether winter is really fading, but all those not under it see the evidence in the form of warmer-than-normal temperatures and rain or mixed precipitation events with below-normal snowfall.

This modern winter pattern poses a challenge for forecasters that takes seasonal forecasts from an already questionable accuracy rate to one of near futility. Essentially, the modern winter forecast is this: predict when the polar vortex will be splintered by warmth invading the North Pole, and then predict exactly where those fractured pools of cold will land.

If you can do that, you can nail down where the narrow, repetitive, heavy bands of snow will develop and you can determine the small areas that will verify a colder-than-normal winter, knowing just about everywhere outside those zones will be warmer-than-normal.

The problem is that some of this fracturing of the polar vortex can happen from one, two or a few powerful storms that successfully carry warmth into the Arctic, and forecasting the presence, track and intensity of these storms from months out is nearly impossible.

The additional challenge is, by and large, we’ve lost the value of what's called analog forecasting. Finding an analog in forecasting means going back to previous years, over several decades, and finding comparable weather patterns: similar jet stream patterns or seasonal patterns leading into winter, and researching what happened during those winters.

The problem is this: back then, you were largely dealing with a standard winter pattern featuring an intact polar vortex that was fairly stable. To introduce a splintering, wobbling, fractured polar vortex and flood even the Arctic atmosphere with warmth just isn’t something we have many analogs for. As a result, you can look at overall, large-scale atmospheric and oceanic patterns and certainly develop a “base state” of how the atmosphere should function, but forecasters need to be prepared to be dreadfully misled by historical analogies that simply don’t fit anymore.

So, for example, the winter of 2022-2023 is occurring in a La Niña pattern, which features colder-than-normal ocean water temperatures in the Pacific Ocean near the Equator. As you can imagine, having a huge mass of ocean water like the Pacific be either warmer or cooler than normal in a large enough area can alter the oceanic and atmospheric patterns on a larger scale.

In the words of First Alert Meteorologist Pamela Gardner, “La Niña is expected to develop for the 3rd year in a row.  Looking back at all past La Niña years, we have been pretty close to ‘normal’ snowfall. North Atlantic oscillation has been negative and is forecast to be neutral to slightly positive. So that means colder-than-normal temps here and a more coastal storm-type track.”

Pamela’s reference to North Atlantic Oscillation is a nod to another large-scale pattern that helps to provide a likely base state for the atmosphere. The NAO pertains to changes in the strength of atmospheric pressure over the North Atlantic – low pressure near Iceland and high pressure near the Azores Islands. A negative NAO means these are both fairly weak, often equating to cold conditions in New England.

As for La Niña, New England often sees warmer-than-normal conditions with it, and more mixed precipitation events than snow.

So how do we put this all together?

Our First Alert team believes the combination of all these factors increases the chance one of the fractured pieces of the polar vortex, with its intense cold, will settle somewhere around southern Hudson Bay and James Bay in Canada, extending into Ontario and Quebec. This would mean incursions of exceptional cold in those areas.

With New England not a far distance as the crow flies, powerful-enough cold fronts would unlock shots of this intense cold to open into New England, with northern New England obviously more susceptible. The end result is probably for New England to lean warmer than normal overall this winter season, given the tendency for warmth to stream northward during a La Niña year, with southern Canada colder than normal and the North Country of New England with the highest potential to settle closer to normal temperatures for the season — though, given the consolidation of polar vortex fragments, the North Country probably will run warmer than normal, as well.

This wouldn’t mean no snow for Southern New England – in fact, an active storm track with occasional shots of deep cold can mean bursts of accumulating snow on the front end of several storms — but a tendency for southern New England to trend toward mixed precipitation as each event unfolds, limiting the chance of an above-normal snow winter.

All of this said, for the reasons of a changing climate’s impact on our winter weather pattern in the Northern Hemisphere, our First Alert team approaches the winter forecast with exceptional humility, and the understanding that much of this is an educated guess, more than ever, as we work to nail down the location of a splintering polar vortex. 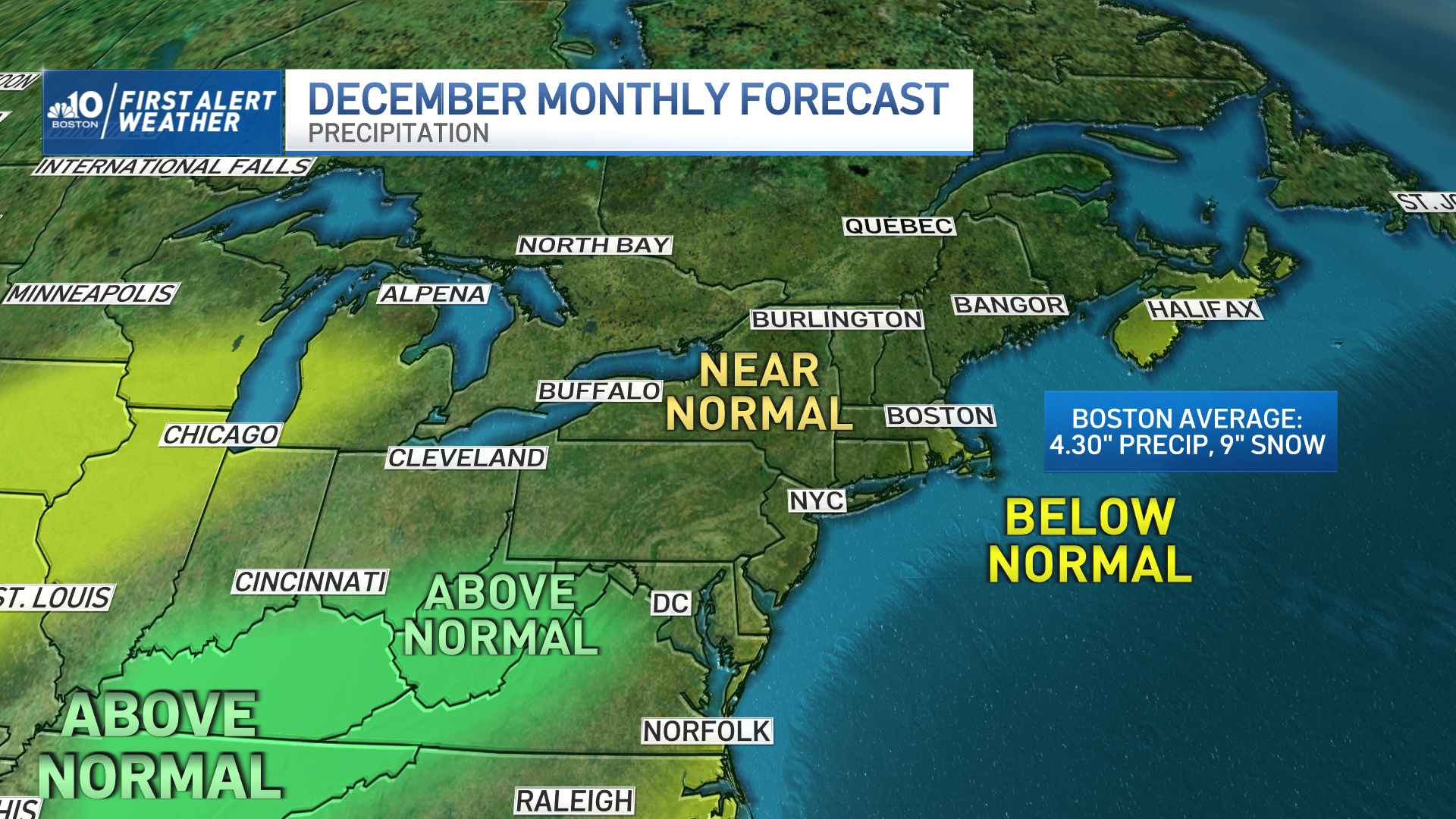 What Kind of Weather Should We Expect in December? Here's the Monthly Forecast 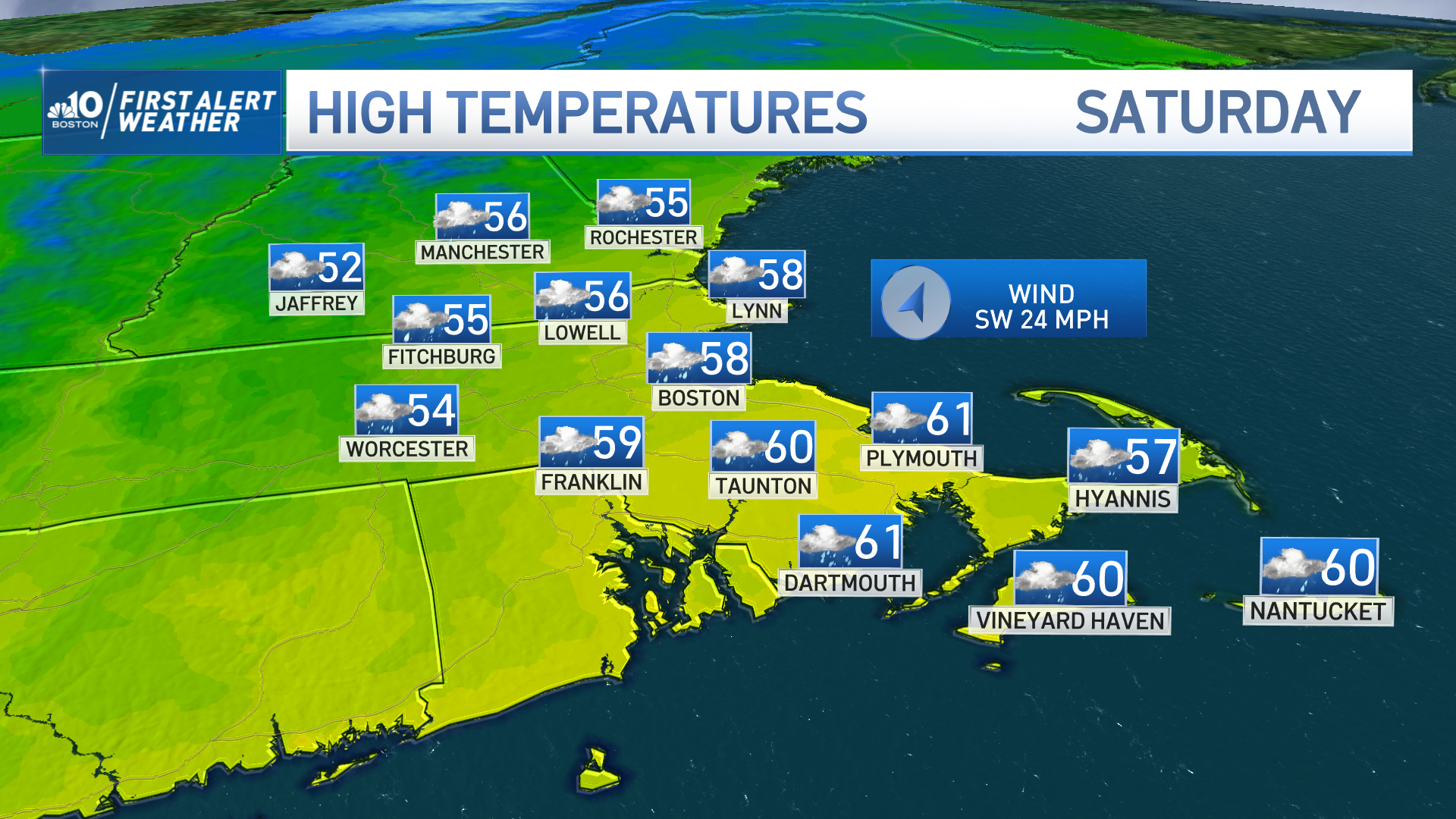