We have a first alert this morning for a mix of snow, ice, and rain lifting from southwest to northeast across the region.

The wintry mix arrived first in southwestern New England at midnight, with snow changing quickly to rain within 20 miles of the coast. That means much of southern New England has seen the worst of the wintry weather, for today anyway.

But northern Massachusetts, much of Vermont, New Hampshire, and especially Maine has several more hours to go of snow and ice. There are a few zones in central New England, where we picked up 3 inches of snow, is now raining with a temperature near 32°, very similar to what happened last Thursday and Friday, with ice accretion. Due to all of this, we have a number of school postponements and cancellations across central and northern New England. 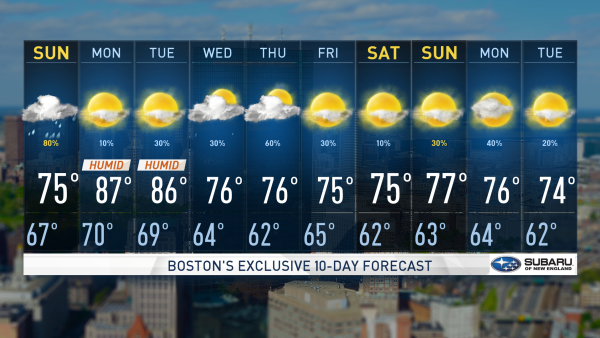 Rainy Close to Weekend, Thunderstorms in Parts of Region

We are being impacted by duel weather systems today. There is southern stream energy with low pressure traveling near Nantucket midday and then out to sea this afternoon. And there is an arctic cold front pushing into northwestern New England this afternoon, will much colder air that will bring a harsh freeze to all of the region tonight. So whatever kind of slush is left on your walkway you want to remove it before the temperature dives late tonight and tomorrow. High temperatures today near 40° in southern New England and low 30s north. With a clearing sky tonight the temperature will fall to the single numbers and teens north, teens and 20s south.

Those readings will probably be the high temperatures for tomorrow, as the air will continue to cool through the day. We may have some upslope snow showers left over, and also some possible ocean affect snow showers on outer Cape Cod, otherwise we have sunshine with wind gusting past 30 mph from the northwest adding an extra chill. High pressure moves right over us on Saturday, that means the wind will be much lighter with a good amount of sunshine, temperatures will rebound from sub zero north, to the single numbers and low teens, and from the single digits south to the 20s to near 30° by afternoon.

A warm front arrives from the west Sunday bringing clouds in a chance of mountain snow showers, otherwise a pretty nice day with temperatures back to 40° south cooler north. The forecast next week, winter break for many, is pretty complicated with the same old boundary between cold in Canada and warm in the eastern United States setting up over the region. Waves of low pressure will bring off and on rain or snow south, and snow north the first part of the week. We’ll take it day by day here in our First Alert 10-Day Forecast.