Harvard University professor Danielle Allen announced an historic run for governor of Massachusetts on Tuesday morning, pledging to re-imagine a commonwealth that works for all, not just for those in power.

"I stand here today, on the 241st anniversary of our state's constitution, as the first African-American woman to run for governor in our state's history," Allen said in front of the Robert Gould Shaw Memorial on the Boston Common.

"The men of the regiment and Robert Shaw were heroes, but leadership should be open to all. This was the first state to abolish enslavement, yet it has taken us this long to get to this day. It's time to accelerate the pace of change."

Allen, 49 and a Democrat, became the first Black woman to run for governor as a member of a major party in Massachusetts history Tuesday. She described her approach as a combination of progressive and integrative, outlining an agenda to establish strong, safe communities; healthy schools; and universal democracy rooted in "an energizing, fair, flourishing and sustainable economy."

Allen emphasized an "existential threat," both with regard to climate and to the health of democracy. Additionally, Allen criticized the state's response to the coronavirus pandemic, which she said highlighted disparities among classes of society.

"We all remember when COVID hit. No help was coming from Washington, little help from the state and the help that came was slow, halting and fumbling," Allen said. "But an even clearer truth was visible -- the pandemic made plain as day that there are different experiences for different people in our commonwealth."

Danielle Allen is entering the gubernatorial race in Massachusetts.

Allen pointed to the state's rocky vaccine rollout, which was initially confusing for the elderly and plagued by long wait times. She described feeling "a sense of shock" over the state's handling of the pandemic that spurred her to work on a COVID rapid response team of policy experts and researchers.

"We celebrate today the end of the emergency orders but we're on the cusp of a wave of evictions," she said.

The state of emergency that was in place in Massachusetts since March 10, 2020 ended at midnight Tuesday morning, as did a batch of pandemic-era policies. Lawmakers failed to move legislation to Gov. Charlie Baker's desk that would keeping in place authorization for remote public meetings, eviction protections, and restaurant relief before those measures expired.

"There was a lot of talk about how we're all in this together, all in the same boat, but it became clear pretty soon that some of us were in sinking scows while some were in the same yachts they had always been in," Allen said.

"But when our state government was failing us, the people did not," Allen said, pointing to various community vaccination efforts.

Allen, who has never held elected office, cited her experience in the mechanics of politics as a policy advisor, which she described as working behind the scenes with elected officials "of all kinds." She said her work on a COVID rapid response team of policy experts and researchers contributed to the Biden-Harris administration's plans, as well as at the state and local level.

"The powerful plainly abandoned the powerless, and the pain is still visceral raw and deep," Allen said. "If we want our institutions to work, this is what we have to change. We have to raise our expectations both of our institutions and of one another. The people have to claim their power."

Massachusetts is struggling through the coronavirus pandemic, but it's not the first outbreak to hit our state over the last few centuries. We'll take you through the history and how what happened to the diseases and viruses that have hurt us before.

Cambridge Mayor Sumbul Siddiqui, who became the first Muslim mayor in Massachusetts in January 2020, opened the event by highlighting Allen's policy work, which she said shaped school reopening guidance in the city.

"Danielle, to me, was a shining beacon of hope in the early days and months of the pandemic," Siddiqui said. "I relied heavily on the thoughtful leadership, Danielle provided. In fact, I remember before one of our major votes around a reopening plan, one of the first calls I made was to Danielle. I was able to trust her immediately."

Allen announced in December that she was exploring a run and has been traveling the state since to talk to residents.

She described her childhood growing up in Southern California in the 1970s, as part of a big family that had its share of struggles with job loss, housing insecurity and addiction. Many of Allen's family members were politically active, which she said reinforced her love for democracy.

Allen said her great grandmother was president of the League of Women Voters in Michigan in the 1930s, her grandfather helped found one of the first NAACP chapters in his northern Florida community, her father in 1992 ran for Senate in California and, in the same year, her aunt was on the ballot for Congress with the Peace and Freedom Party in the Bay Area.

In an interview Monday with NBC10 Boston, Allen addressed the historic element of her campaign.

"One feels the great sense of responsibility, but also a sense of sadness that it shouldn't have taken us 250 years to get to a point where this is possible," she said.

Allen enters the race at a time when the face of Massachusetts politics is changing.

Kim Janey became Boston’s first black mayor just months ago, and all of the top candidates for the fall election are people of color.

On the Republican side, Baker has not yet announced whether he will seek a third term. If he does not, Lt. Gov. Karyn Polito, would likely be the frontrunner for the party's nomination.

More on the Massachusetts governor's race 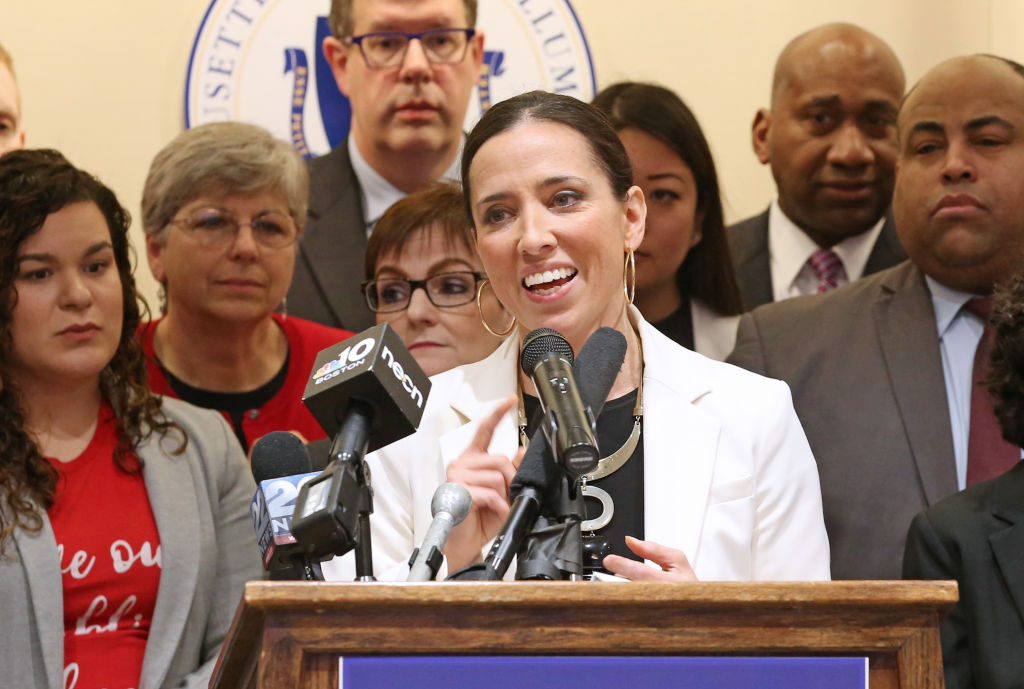