A hospital in Norwood, Massachusetts has been temporarily closed after a violent storm Sunday evening caused flash floods that sent water into the facility.

Calling the flooding a "significant event," Norwood Hospital president Dr. Salvatore Perla said the hospital was closed for the time being as dozens of remaining patiets were being evacutated from the premisis Monday morning.

Perla said highest-risk patients were evacuated and taken to other facilities starting last night when flooding began at the hospital.

Hospital workers should not come to work unless specifically called on to do so, Perla said. He said family members of patients should call 781-769-4000 to find out where their loved ones have been relocated to.

Norwood Hospital in Massachusetts remained closed Monday afternoon after a storm on Sunday caused severe flooding at the facility.

The update came as thousands were still without power across Massachusetts Monday morning, after storms the previous day caused flooding and other damage throughout the region and more downpours were expected.

The National Weather Service in Boston issued a rare flash flood emergency for Norwood and surrounding towns, calling it a life-threatening situation. This was the first flash flood emergency issued since 2014 -- which was during Arthur, a storm that dropped a half foot of rain near Fall River. The only other time a flash flood emergency was issued was in 2011 for parts of central and western Massachusetts during Hurricane Irene.

As of 4 a.m. Monday, 2,016 people in Massachusetts were without power. Sunday's storms brought lightening, hail, torrential rain and strong winds to wide swaths of New England, prompting watches and warnings throughout the day.

A massive tree broke through windows when it crashed into an apartment building on Perry Street in Brookline, according to residents, who said they were thankful they could get out through a back door. No injuries were reported.

"I'm so grateful that there were no cars there and nobody got hurt, there's no wires," resident Karin Welker said, "we're lucky."

Resident Jay Joshi couldn't get in or out of the front entrance of his home.

"The tree was right through the glass and right sticking through the window," resident Rachel Carlson said. "There was glass all over the place."

The damage was widespread in Norwood in particular, causing a car to get stuck under a railroad overpass on Nahant Street and forcing several restaurants to close due to heavy flooding on Central Street.

Officials said some four inches of rain fell in a span of some 90 minutes, causing storm drains to overflow. Cars were seen stalling out as they tried to navigate the dangerous terrain.

"It was something like a movie. It was like we were running away from water," Norwood Hospital employee Michael Ware said. “It burst open all the doors in the basement, so all the water just came in at once.”

Crews pumped water out after the heavy downpour Sunday forced the hospital to evacuate both the ICU and the emergency room. Ware said the water rushed in so quickly there was little time to react.

Several cars were submerged in the Norwood Hospital parking lot and the water knocked out power to parts of the building.

Initially, about 20 patients were forced to evacuate, but because of the ongoing power outages dozens more were evacuated late last night.

The emergency room was still closed as of Monday morning. Those who have an emergency are being asked to go to neighboring hospitals, like Beth Israel Deaconess in Needham and Sturdy Memorial Hospital in Attleboro.

“The flooding was significant, and it just came from multiple areas. But we were able to get through all of this with zero injuries," Norwood Hospital President Sal Perla said. 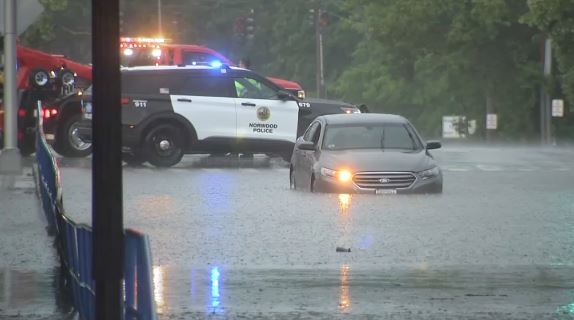 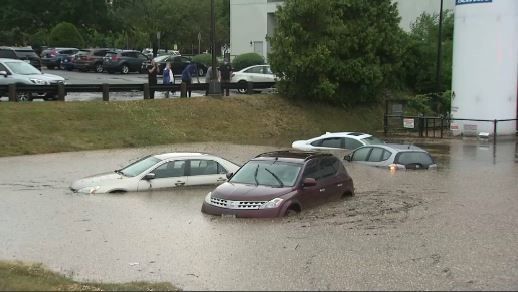