“Change is never easy, but with this vote, the House of Representatives acts to ensure fairness and equality," House Speaker Robert DeLeo said in a statement Friday night.

And on the third day, after sessions that ran for a collective 35 hours, the Massachusetts House of Representatives passed a sweeping police reform and accountability bill that seeks to certify all law enforcement officers in the state and curb the use of force tactics by police.

Republicans and a significant number of Democrats opposed the bill, but Democrats who control the House were able to pass it on Friday at 10 p.m. on a 93-66 vote.

The legislation will likely head next to six-member House-Senate conference committee for resolution, but the bill's negotiators have a short window - seven days - to try to get a consensus bill to Gov. Charlie Baker, who had proposed his own police accountability bill. The Senate approved its bill on a 30-7 vote. Formal legislative sessions, where controversial matters are settled, are set to end for 2020 on Friday, July 31.

The House bill creates an independent Massachusetts Police Standards and Training Commission that would be responsible for licensing all law enforcement in the state every three years. Members of the commission would have the authority to decertify an officer for misconduct, including bias, conviction of a felony, submission of false timesheets, and use of excessive force.

The Massachusetts House of Representatives has taken up the debate over police reform legislation.

"Everybody had to give up something here to get to a common good, right. And sometimes that's where life takes you. So these are moments that are historical and unique, challenging, but these are profile of courage moments," chair of the Black and Latino Legislative Caucus Rep. Carlos Gonzalez told reporters after Friday's session. "Both chambers want to get something across to the governor and get something that can be approved by the governor, but also veto-proof in both chambers."

The House vote suggests negotiators may need to work with Baker to craft a bill he is willing to sign.

With the slightly differing versions of police reform passed in both branches, the Legislature has begun to answer at least some of the calls from protestors to address police brutality after the killing of George Floyd while in Minneapolis police custody. For weeks demonstrators gathered by the thousands, showing their support for the Black Lives Matter movement and making it clear that they were seeking strong reforms.

The bill takes on qualified immunity, an issue that drew contentious debate in the Senate last week, by tying the court-made doctrine in the case of police directly to the licensing process and revoking immunity in any case that results in decertification. The House also proposes creating a commission to study qualified immunity and directs the panel to report findings by March 31, 2020, addressing concerns of police unions that the impact of the doctrine is not widely understood.

The Massachusetts House of Representatives is expected to debate a police reform bill Wednesday as police chiefs criticize the move as far reaching.

One amendment would have pushed off the effective date of several sections in the bill dealing with qualified immunity until the commission released its final report. The amendment was rejected on a 72-87 vote, with Rep. Bradford Hill (R-Ipswich) arguing that lawmakers should not so quickly approve and implement changes to a "complicated issue" without first studying its ramifications.

House Speaker Robert DeLeo first pledged to help assemble an omnibus piece of legislation in early June and said his goal was to get the bill to Baker's desk by July 31. The Senate released its bill July 6 and approved it July 14 after overcoming a difficult rollout and a lengthy session with a final vote taking place after 4 a.m.

DeLeo said the legislation was difficult to discuss and debate but respect was held on both sides.

"I don't think that people on either side had any anger at the other side," DeLeo told the News Service Friday night. "But having said that I think we wanted to try to get it as right to make sure that everyone had the proper protections, whether it was people Black and Brown or whether it was the members of the police force to make sure that everyone was treated fairly."

Carol Rose, executive director of the American Civil Liberties Association of Massachusetts, said the bill "does not reflect the fierce urgency that deadly police violence against Black people demands. Instead, it reflects the depth of entrenched opposition to necessary police reform. Police unions and officers used the weapon of fear to maintain the status quo and undermine even very moderate reforms."

The House bill, if signed into law, "will not help victims of violence hold police accountable," Rose added, calling for an end to qualified immunity and the empowerment of "victims of police violence to seek justice for the harms they have suffered and to hold abusive officers directly accountable."

A dozen reverends from Black churches across Massachusetts gathered on the steps of the State House to call on lawmakers to pass police reform legislation. The Senate has done it. The House is debating its bill this week, but these religious leaders say it doesn't go far enough.

Among the various permanent commissions the bill creates, one on the status of African Americans would attempt to help lawmakers create solutions to discrimination and issues facing the Black community. The legislation also bans the use of facial technology, chokeholds, and regulates the use of tear gas and rubber bullets unless officers have no other options to protect public safety.

A push to completely ban the use of tear gas and other chemical weapons by police officers in the House version failed Thursday after Rep. Mike Connolly's amendment died on a 38-120 vote. Rep. Jack Patrick Lewis publicly supported the amendment comparing the use of such weapons to scenes of the "horrors of war and authoritarian regimes."

Much of the debate in the House took place behind closed doors and on conference calls and House leaders packed bundles of proposed changes into three consolidated amendments, an approach that limited some public debate. The first dealt with the standards that must be met in order for a preliminary inquiry into an officer's conduct to be launched and for an officer to be certified.

Under one successful consolidated bundle, the commission could start a preliminary inquiry if it finds "by a preponderance of evidence" that the officer was part of an officer-involved injury or death, committed a felony or misdemeanor or violated state standards. Requirements to decertify an officer remained "by clear and convincing evidence."

One proposal from Rep. Liz Miranda drew emotional speeches from Democrats and a Republican around the issue of further restricting no-knock warrants. The amendment passed on a 83-76 vote Wednesday and only allows law enforcement officers to use the warrants if they have "no reason to believe that minor children or adults over the age of 65 are in the home."

Rep. Timothy Whelan, a former State Police trooper, argued that the amendment put law enforcement lives in danger and recounted a situation where he said he would likely have died if a no-knock had not been utilized.

Prior to the vote, Miranda recalled the death of Breonna Taylor and Ayanna Stanley Jones, both of whom were killed after police entered their households.

"It could have happened in Massachusetts," Miranda said on the House floor, adding that her amendment "is to save women like me, like Breonna, and girls like Ayanna." 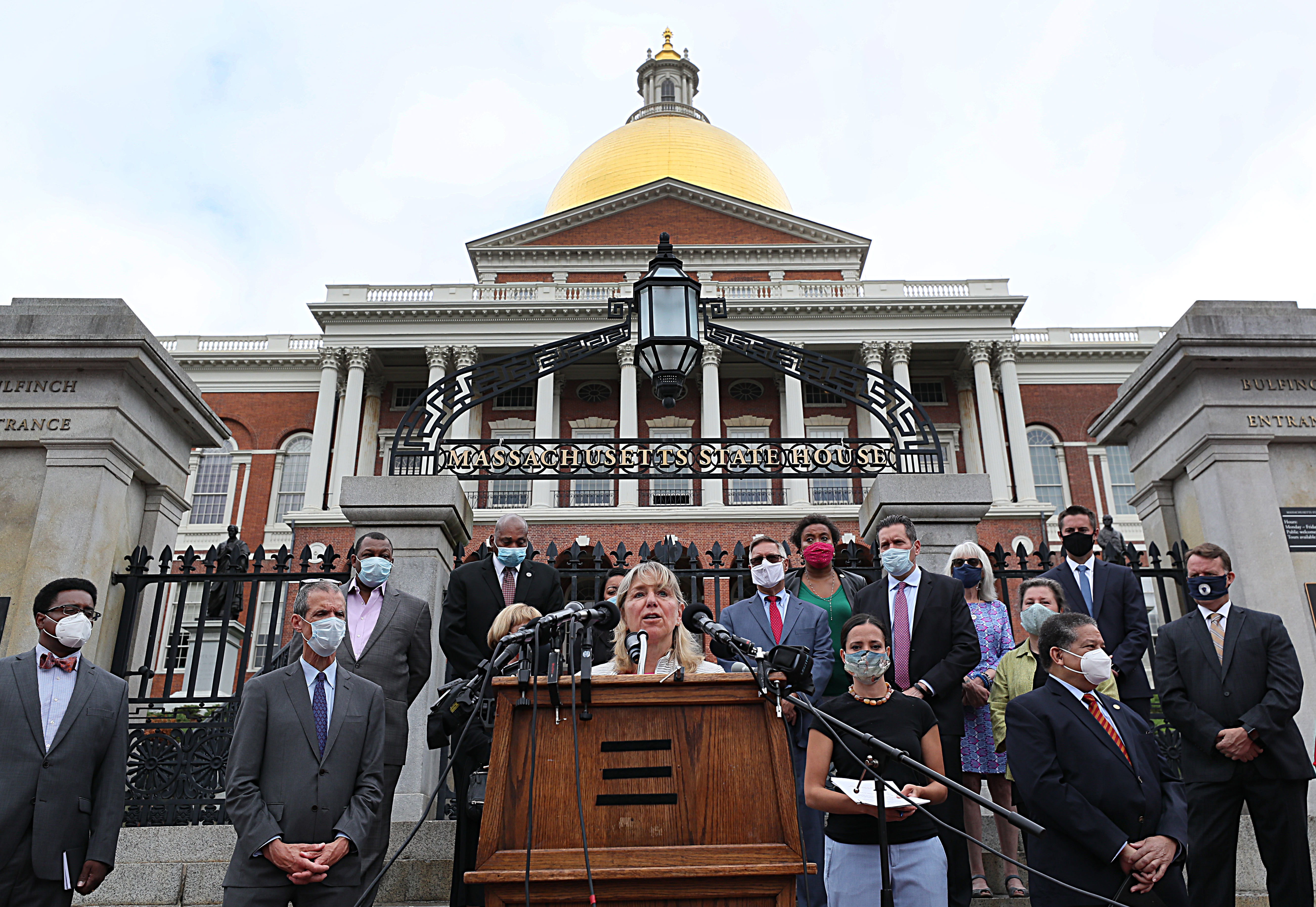