The Prince and Princess of Wales continued their string of public appearances Thursday, ahead of Friday's Earthshot Prize Award Ceremony

Royal fever gripped the Boston area on Thursday as the Prince and Princess of Wales made another day of appearances, visiting innovative local organizations and making friends along the way.

William and Kate are in Boston through Friday for The Earthshot Prize Awards, which are will be presented in a star-studded ceremony Friday at the MGM Music Hall in Fenway. They got a warm welcome from the City of Boston Wednesday evening, then went to the Celtics game at TD Garden with Governor-elect Maura Healey and Boston Mayor Michelle Wu.

On Thursday morning, a little boy from Somerville stole the show as he got a personal meet-and-greet with the royals thanks to his elaborate King's Guard costume.

"It was crazy!" Henry Dynov Teixeira, 8, recalled afterward, adding. "I wasn't actually that nervous now that I think of it when I actually did it."

With the Prince and Princess of Wales headed to Somerville, Massachusetts, on Thursday, 8-year-old Henry Dynov Teixeira dressed for the occasion, hoping to meet the prince and princess for the first time.

The couple had begun their day with a visit to the Greentown Labs startup to learn about their climate innovations. Then they headed to Chelsea to visit Roca Inc., a non-profit organization that focuses on helping high-risk young people.

With the Earthshot Prize aiming to find new solutions to repair the planet's climate, it was only fitting that the Prince and Princess saw firsthand some of the scientific innovation going on in Greater Boston.

Greentown Labs, a startup incubator, works toward "solving the climate crisis through entrepreneurship and collaboration," according to the startup, which said that it was honored to host the Prince and Princess.

Greentown also has a location in Houston. The lab's website describes it as a community for early-stage entrepreneurs, where members pay monthly fees for lab and office space. The startups also get access to staff support, programming, equipment and more.

The lab touts several accomplishments on its website, including having created over 9,000 jobs and incubating over 500 companies.

After their stop in Somerville, the royals dropped in to at Roca Inc. in Chelsea. The organization describes its mission as disrupting "incarceration, poverty, and racism by engaging the young adults, police, and systems at the center of urban violence in relationships to address trauma, find hope, and drive change."

Founder Molly Baldwin was surprised by the news of the visit, despite the group's focus on mental health, which is high-priority topic for Will and Kate.

"It’s just a huge gift that will elevate the work," said Baldwin, who is also Roca's CEO, ahead of the visit. "There are young people who struggle to connect with the resources we have in this country and we are so honored."

Roca's founder said that despite months of preparation for the royal visit, she's overwhelmed with excitement about the attention this will bring their mission.

Afterward, Baldwin said, "On one level you can hardly believe it, here are two of the most famous people in the world coming in the door, but they are human beings with great big hearts."

The Prince and Princess met with leaders of Roca and spent time with women in the young mothers program and men working through trauma that led them to harmful decisions.

Matthew Quinton said the royals were "very understanding, trying to understand us and where we come from."

Roca Inc. focuses on teens and young adults at the center of violence. They collaborate with police, judges, child protective services and other stakeholders to reduce trauma, violence and incarceration. At the same time, the group works to find youth sustainable employment.

The last stop on Thursday's schedule was East Boston, where the royals got to see the work that one of last year's Earthshot Prize finalists, Living Seawalls, will be doing.

Living Seawalls installs panels that imitate the ecosystem of a natural shoreline, and the organization is working with the Stone Living Lab — a partnership involving the city, state, UMass Boston and more — to install panels at two sites in Boston Harbor.

William and Kate were joined on their tour of the harbor by Wu.

As word started spreading that the Prince and Princess of Wales were making an unannounced visit to East Boston Thursday afternoon, neighborhood residents headed to Piers Park.

“Everyone in Eastie was talking about it,” said Steph Thomas.

Onlookers climbed the fence to catch a glimpse of their majesties. The Prince and Princess of Wales arrived to a warm welcome.

“She gave me a little wave and I said, 'Welcome to Eastie,'” said Meg Grady. “I think it’s an iconic moment in history, I think we’ll remember in 50 years that we were in Eastie in our home at our time in our lives and we’re so glad that East Boston made it to the list.”

The crowd hoped to get up close and personal with the future King and Queen of England.

“She flashed us a million dollar smile and then she walked down towards the water,” said Caroline Quinn.

The royal couple -- guided by Wu along Boston Harbor -- wanted to learn about Boston’s challenges when it comes to climate change, rising sea levels, and storm surge -- and what the city is doing to face environmental issues.

“They’re delightful and generous with their time,” Wu said. “We got to spend some chilly but quite educational time together here, walking along the waterfront and talking about the history of so many decades of community advocacy that have led us to this point of prioritizing green.”

When the royal couple left, there was no meet and greet with the crowd but the neighborhood was still thrilled to catch a glimpse of royalty in their own backyard.

“It’s still really exciting because how often are Will and Kate in Boston and how often are they in our neighborhood,” said Thomas. “It feels really surreal.”

The couple had begun their day with a visit to the Greentown Labs startup in Somerville to learn about their climate innovations. Then they headed to Chelsea to visit Roca Inc., a non-profit organization that focuses on helping high-risk young people. They also walked along the harbor in East Boston.

Boston Was 'the Obvious Choice'

William — the heir to the British throne — said that Boston was "the obvious choice" to host the second-ever Earthshot Prize Awards, founded by the prince to honor groundbreaking solutions to environmental issues.

It's the home of President John F. Kennedy, whose "moonshot" speech motivated the U.S. to send man to the moon and inspired the prince to sponsor the Earthshot Prize, which aims to find solutions to climate change.

Boston is also "a global leader in science, innovation and boundless ambition," thanks to its universities, researchers and startups, William said. He noted that its leaders are pushing for green policies as well.

Prince William spoke to the City of Boston on Wednesday, introduced by Gov.-elect Maura Healey and Mayor Michelle Wu, at the start of his and Princess Catherine's royal visit.

"Like President Kennedy, Catherine and I firmly believe that we all have it in ourselves to achieve great things, and that human beings have the ability to lead, innovate and problem solve," he said. "We cannot wait to celebrate the Earthshot Prize finalists later on this week, and we are both looking forward to spending the next few days learning about the innovative ways the people of Massachusetts are tackling climate change."

The royals landed at Boston Logan International Airport Wednesday afternoon on a British Airways flight and were greeted by Massachusetts Gov. Charlie Baker.

President Joe Biden will be in Boston on Friday as well, for a Senate fundraiser. The White House said Thursday that he will meet with William at the John F. Kennedy Library and Museum.

The royal visit to Boston began Wednesday, with Prince William and Princess Kate taking in a Celtics game.

Royalty at the Garden

After flying into Logan and discussing climate action with state and city leaders, the Prince and Princess were probably in need of a little R&R.

They headed to TD Garden Wednesday night, and sat courtside to watch the 17-4 Boston Celtics face the Miami Heat in a 2022 Eastern Conference Finals rematch. They sat next to Healey and Wu. And they also met up with Ambassador Caroline Kennedy.

It appeared the royals were ready for the matchup, too: Their official Twitter account posted a photo near the Garden floor about 20 minutes before tip-off. 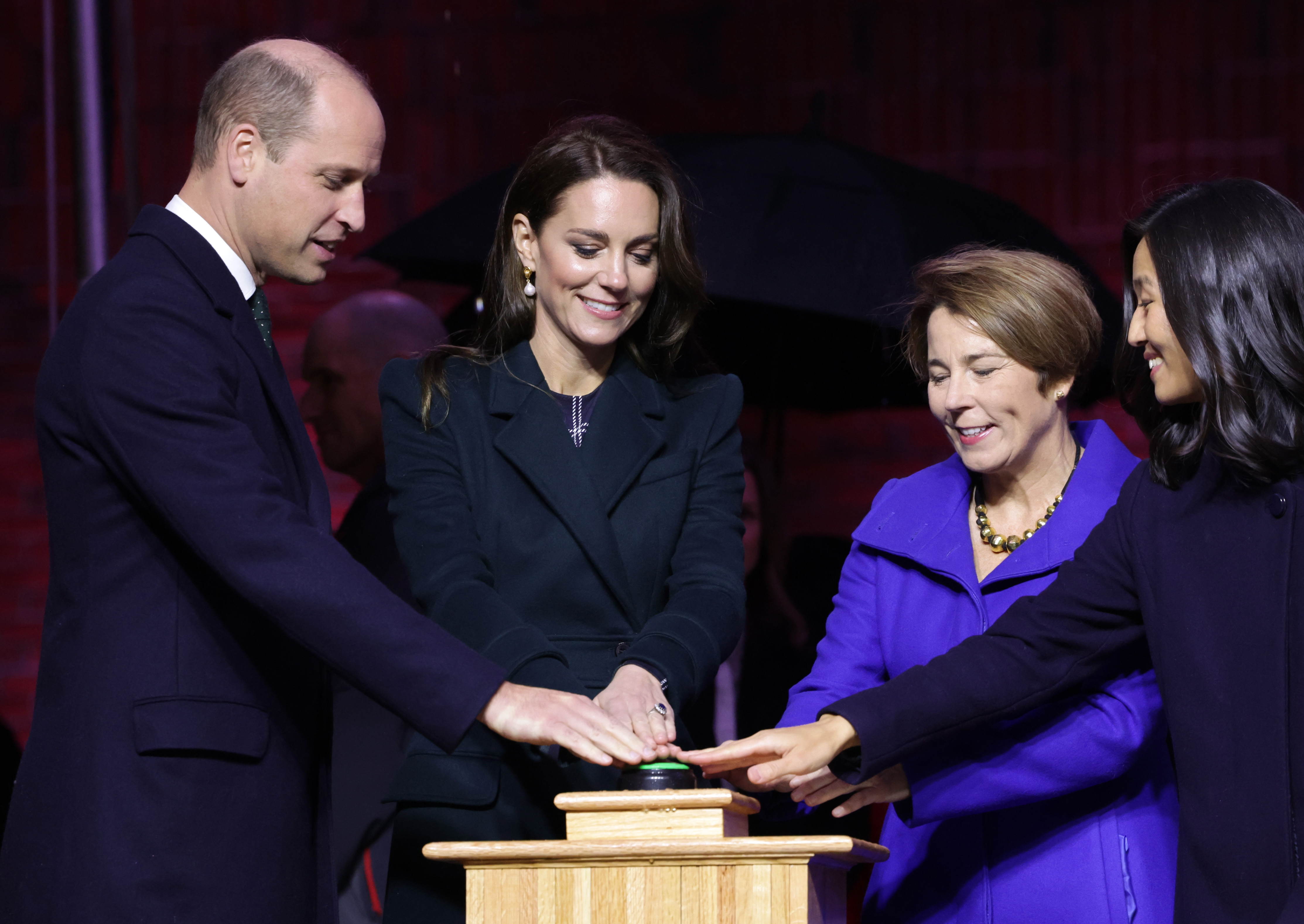 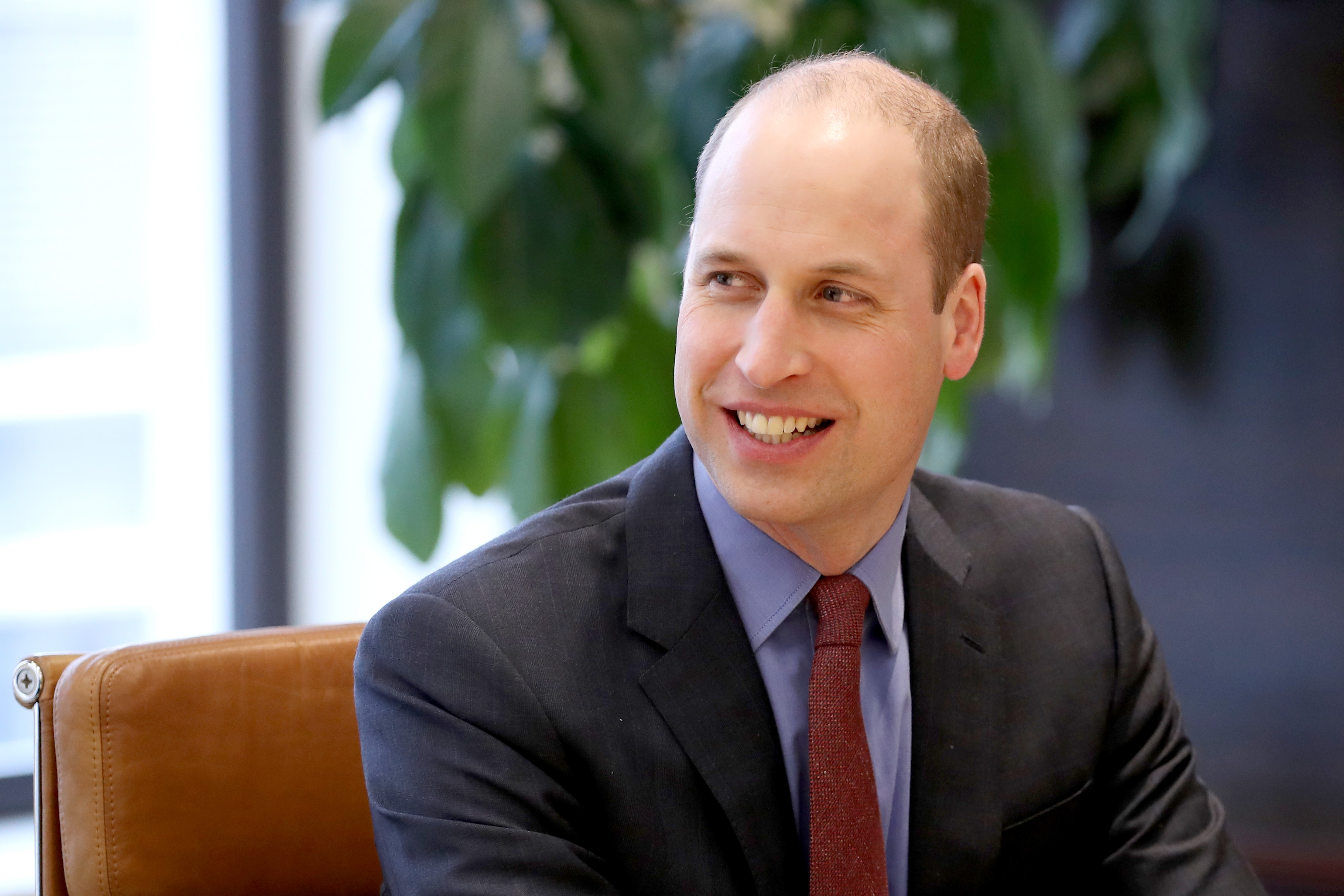 ‘To the People of Boston, Thank You': Prince William Issues Statement Upon Arrival