Would Belichick Have Had the Same Success Without Brady? ‘Of Course Not,' He Says

I think I've been on the record dozens of times saying there's no quarterback I'd rather have other than Tom Brady,' the Patriots coach said during a media availability Friday

For years, people have been asking who is more responsible for the Patriots' dynasty -- head coach Bill Belichick or former quarterback Tom Brady.

With Brady set to return to New England on Sunday to play the Patriots as a member of the Tampa Bay Buccaneers, it makes sense that the question would come up again.

During his media availability Friday, Belichick didn't settle the question, but he did make one thing clear: without Brady, he would not have had the same level of success as a coach.

"Of course not," Belichick replied bluntly when asked the question.

When asked to elaborate, he appeared agitated.

"Well, I mean, we've talked about that for two decades. I think I've been on the record dozens of times saying there's no quarterback I'd rather have other than Tom Brady. I was very lucky to have Tom as a quarterback to coach him, and he was as good as any coach could ever ask for."

Our partners at Strat-O-Matic simulated how the 2021 season would play it with Tom Brady at QB over rookie Mac Jones, keeping the remainder of the current roster in tact.

Belichick also fielded questions about Antonio Brown playing Sunday for the Buccaneers, saying "he'll be a problem when he's out there, I'm sure," and spoke in glowing terms about Tampa Bay's offense.

He was also asked if he thinks Sunday's game will be stopped if Brady passes the NFL's all-time passing yardage record, which he will do if he hits 68 passing yards.

"I have no idea, honestly," Belichick said. "We're going to try to keep him from getting too many yards passing the ball. But you're going to have to talk to someone else about that."

This was Belichick's second press conference ahead of Sunday's game. When he spoke Wednesday, he denied a report that he refused to meet with Brady before the quarterback left New England for Tampa Bay.

According to an excerpt from ESPN senior writer Seth Wickersham’s upcoming book, “It’s Better to Be Feared,” before Brady departed he reportedly wanted to say goodbye to Belichick in person, but the Patriots head coach said he wasn’t available.

"That's not true," Belichick said, adding that the book "sounds like a lot of second-, third-, fourth-hand comments."

More from the new book, 'It's Better to Be Feared' 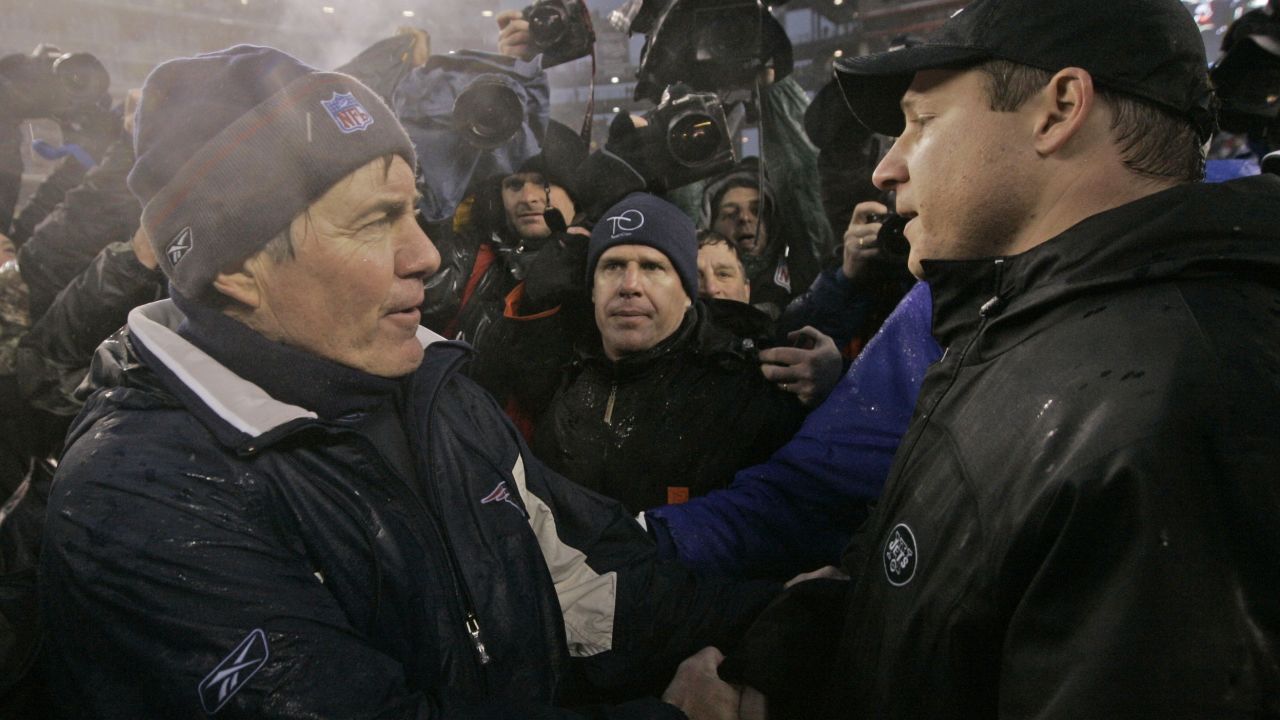 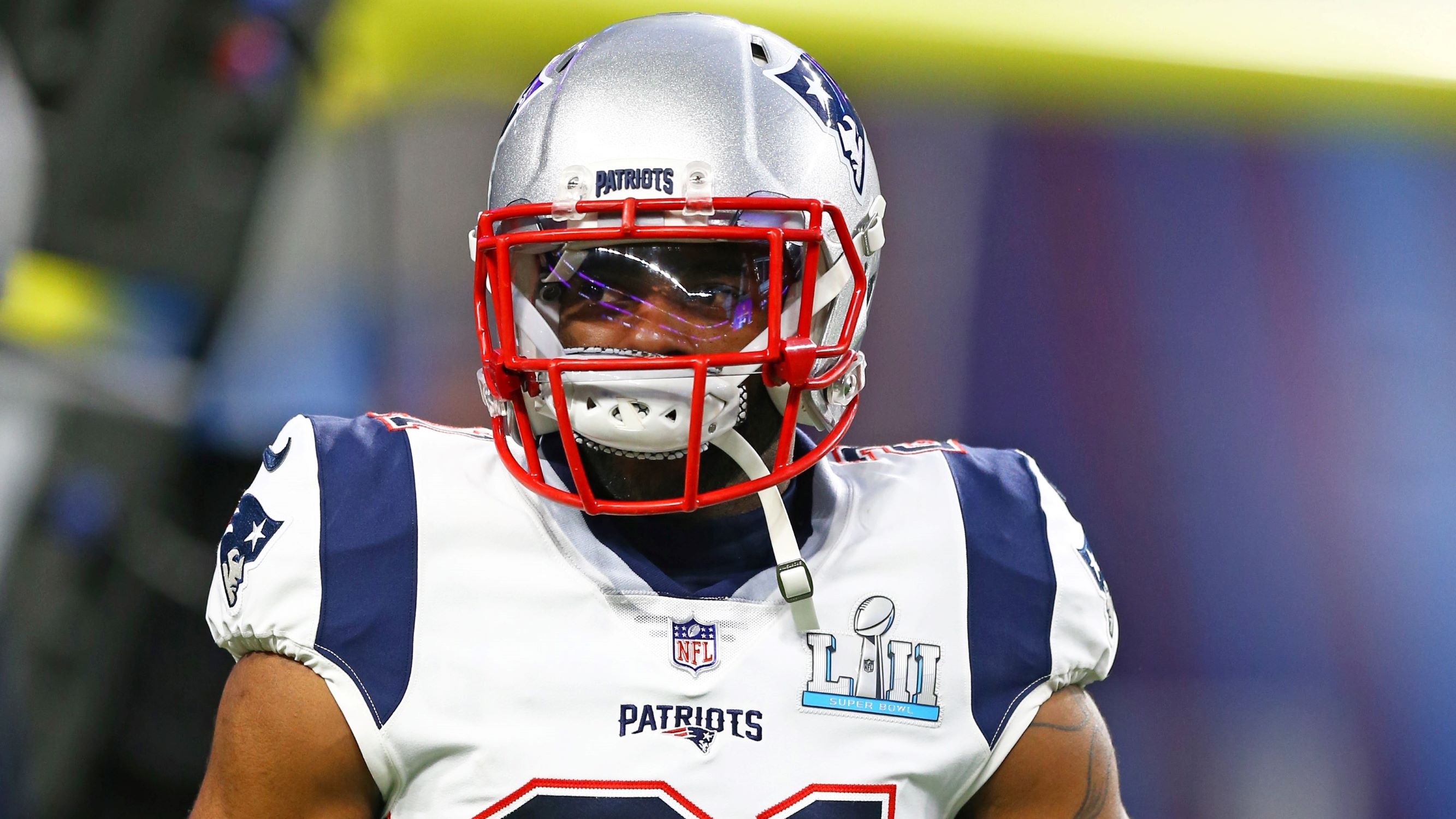 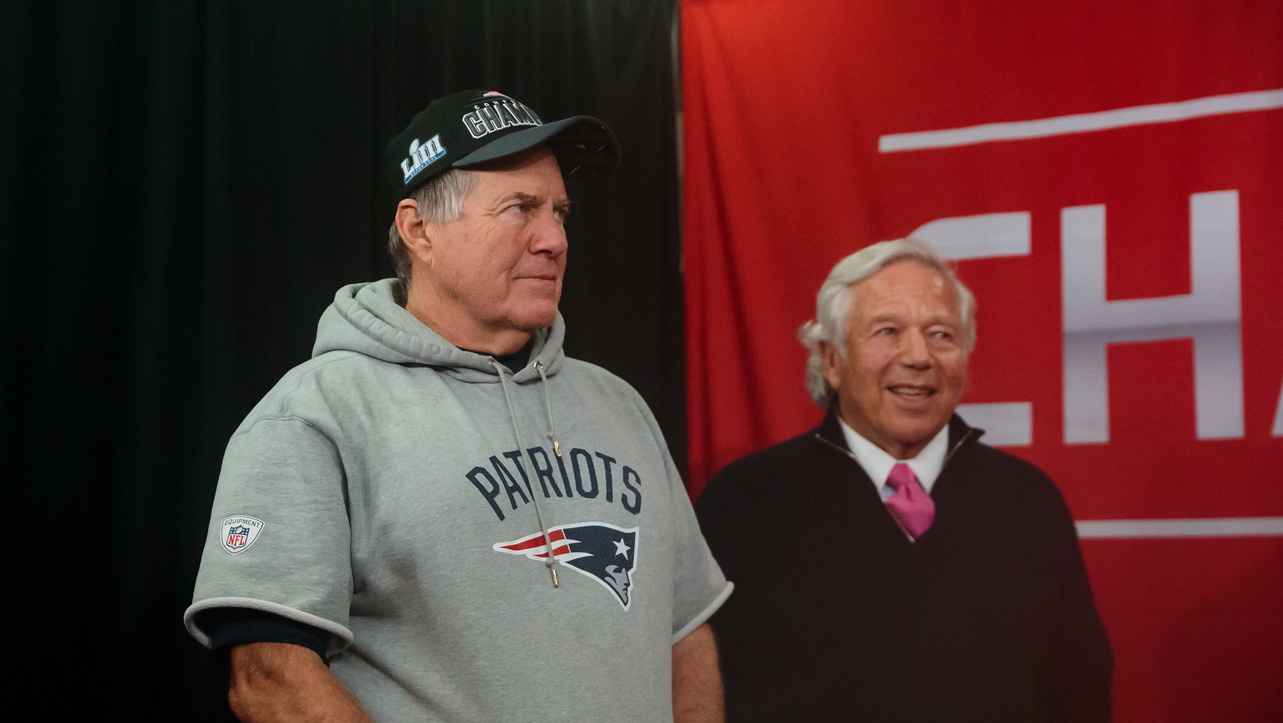 Other than that, Belichick had nothing but positive things to say about Brady and Rob Gronkowski ahead of Sunday's big matchup with Tampa Bay.

"We know some of their players well," he said. "Tom, Rob, players like that. Certainly Rob and Tom have done a lot for this organization and for me. I appreicate everything they've done, I have a lot of respect for them, but this Sunday, we're on opposite sides of the field. We'll do what we can to not make them enjoy the night and I'm sure they'll do the same to us."

Belichick said nothing Brady does surprises him, and if anyone can play until 50, as Brady has suggested he might, it will be his former quarterback.

The Patriots coach was also asked Wednesday if Brady is tough to defend, a question he couldn't seem to believe he'd just been asked.

"Yeah, he's as tough as any quarterback who is or ever has been. He's done more than any other player at that position, whatever measurement you want to take... There are not too many that are tougher than him."

Bill Belichick denies that the refused to meet with Tom Brady before the quarterback left for the Tampa Bay Buccaneers.

Belichick was also asked about his message to any Patriots fans wondering why Brady isn't still in New England, but refused to bite.

"All that is in the past right now," he said. "I am going forward."

Earlier this week, Belichick said on WEEI's The Greg Hill Show that the Patriots "weren't as good of an option as Tampa" during Brady's free agency following the 2019 season, leading to his departure from the only franchise he'd ever played for over 20 NFL seasons.

"You’d have to ask him [Brady] about all that," Belichick said. "But that really wasn’t a question about not wanting him -- that’s for sure."

Sunday will mark the first, and quite possibly last time that Brady plays against Belichick. Under the NFL's current scheduling template, the Patriots and Buccaneers aren't guaranteed to play again until 2025 in Tampa or until 2029 in Foxboro.

However, due to the inclusion of a 17th regular season game, the teams could possibly cross paths before then based on their respective finish in the standings in 2022. The AFC East and NFC South are scheduled to face one another in a 17th game in 2023, with division winners from the previous season facing one another, second place finishers facing second place finishers, etc. 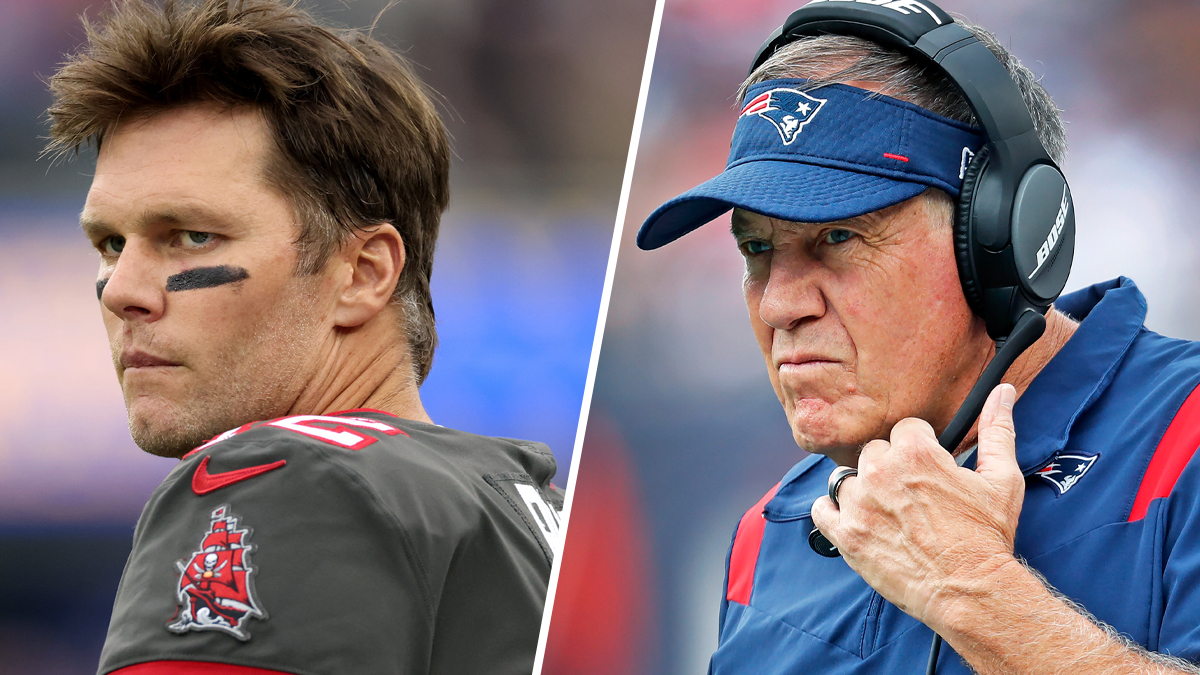 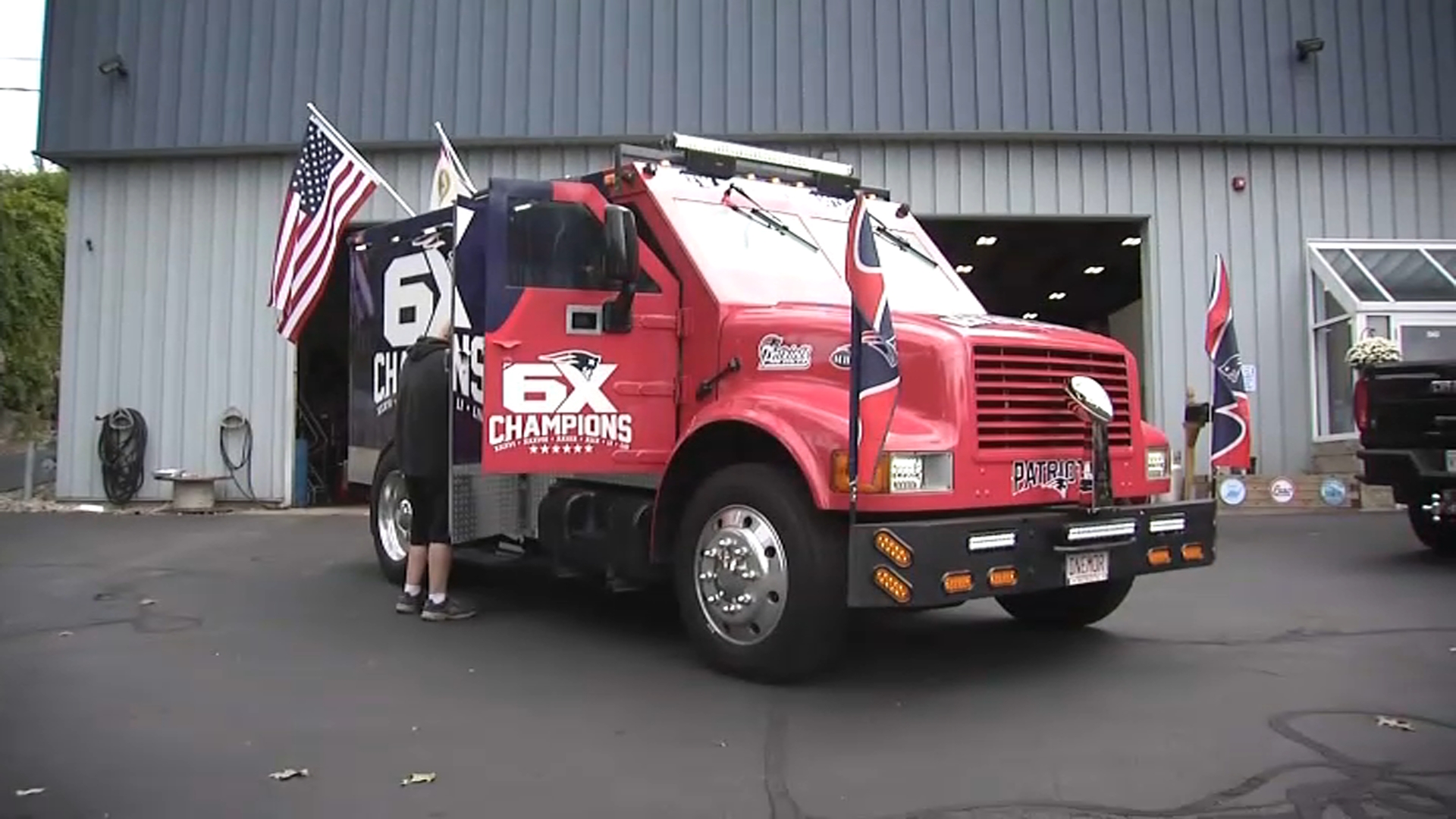 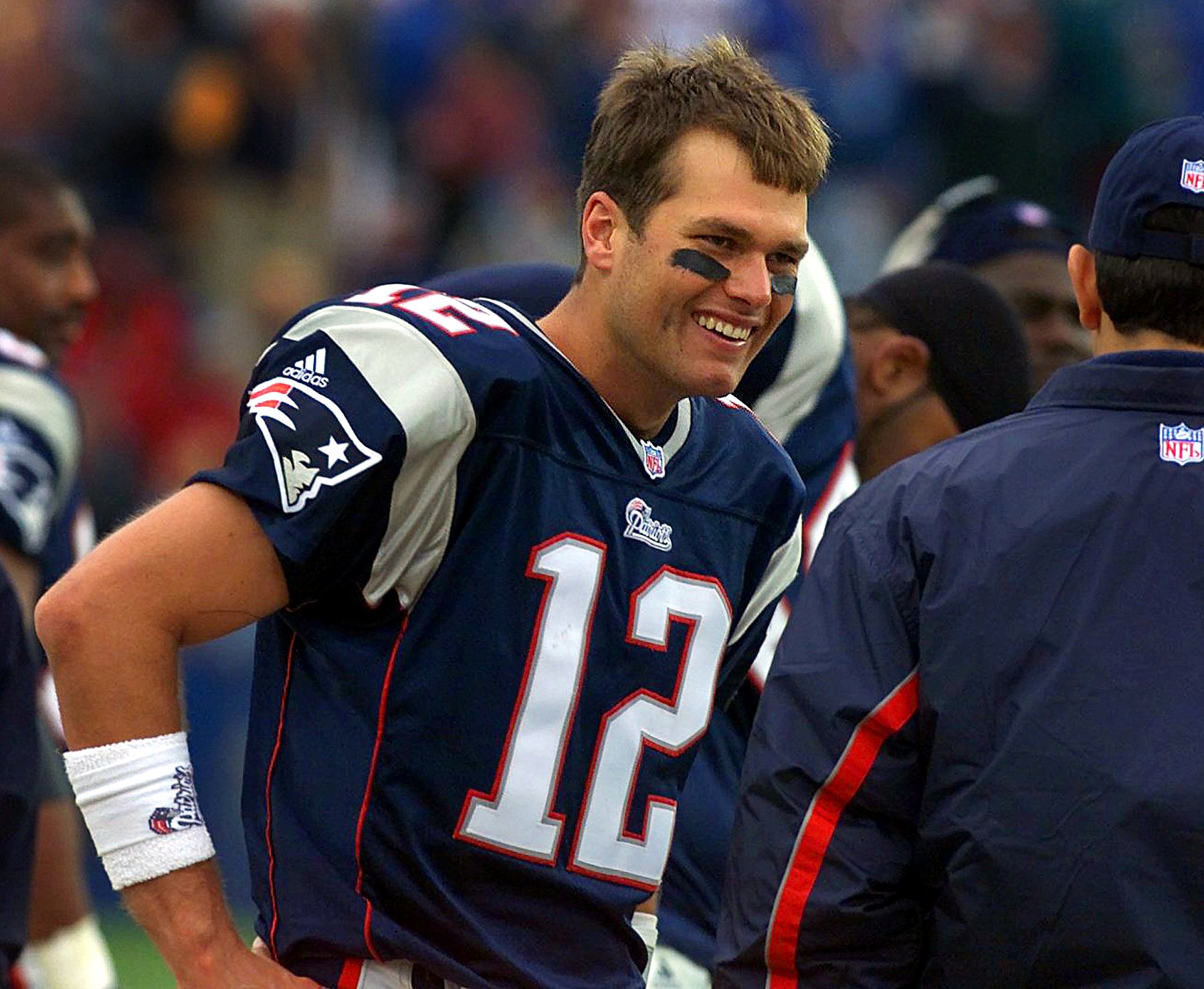